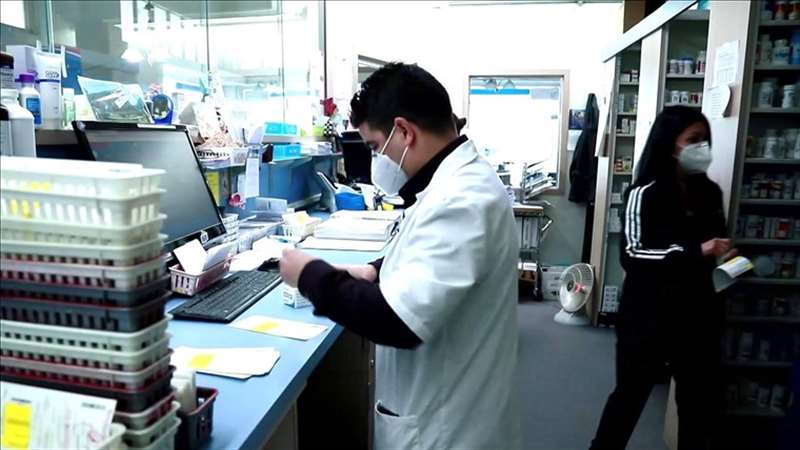 From the moment Marilyn Jerominski walks into her pharmacy every morning, her time is in demand. As pharmacy manager of a busy 24-hour Walgreens in Palm Desert, California, she is responsible for the safety and accuracy of the thousands of prescriptions the store dispenses every week.

“There’s so much stress,” Jerominski said. “You’re not only running to the drive-thru but to the front, to the vaccination station to give a vaccination, then to the phone. … It’s almost impossible for any human to keep that momentum day in and out.”

It wasn’t always that way. When she began working as a pharmacist 13 years ago, it was a very different environment, Jerominski said. There were more staff members and more time to counsel patients about their medications. These days, she is exhausted and often overwhelmed, worried about making a mistake when someone’s health is on the line. She is far from alone.

NBC News spoke to 31 retail pharmacists and pharmacy technicians in 15 states. From 12-hour shifts so busy they don’t have time to go to the bathroom or eat to crying in their cars every day after work or lying awake at night worrying about mistakes they might have made while rushing, they described an industry of health care professionals at the breaking point.

“The expectations they’re having and the resources they’re giving us just aren’t matching up,” said a CVS pharmacy technician in New York state. “We’re going to have a fatal error somewhere because we’re doing too many things at once.”

“Pharmacists are being asked to do additional tasks and aren’t necessarily receiving the assistance that they need from their employer,” said Al Carter, executive director of the National Association of Boards of Pharmacy, a nonprofit that represents state pharmacy regulators. “That’s a huge concern for pharmacists’ well-being but also, more importantly, for patient safety.”

The more overworked they are, the more likely they are to make errors, he said. Pharmacy errors can range from smaller mistakes, like miscounting the number of pills in a bottle, to potentially deadly ones, like missing a dangerous drug interaction. Working conditions and workplace pressures have led to “growing concerns from many state boards of pharmacy” about prescription errors, Carter said.

Walgreens and CVS, the country’s largest pharmacy chains, were early government partners in the vaccine rollout. In statements to NBC News, they said that they are grateful for the work their pharmacy staffs have done during the pandemic and that they are hiring thousands of additional staff members to ensure that pharmacies have the support and resources to administer Covid-19 vaccine shots and provide the best care for patients. They and the trade group representing all chain drugstores also said technology improvements have freed pharmacists from many routine tasks in recent years, allowing them to focus on the safety and health of patients — their top priority.

CVS said the majority of stores giving Covid-19 vaccinations will do so through a dedicated team of pharmacists working only on vaccinations. In stores that don’t, the company will provide additional staff support and limit the numbers of appointments.

Pharmacies have already begun to vaccinate around the country, but many pharmacists said they’re worried about how much additional staffing they’ll get to give vaccinations.

Jerominski’s pharmacy began vaccinating last month. The vaccinations are going well, she said, but other work has been piling up as she struggles to find time to do it all.

“Right now, it’s just so crazy,” she said during a shift break on her third day vaccinating. “Like, it’s 1 o’clock, and I’ve done 14 Covid vaccines this morning, in between filling prescriptions. … It’s wonderful that we’re doing this, and this is our duty. This is what we’re supposed to be doing. But we need more help.”

A pharmacist’s job is far more than putting pills in bottles. Experts in drugs and medication management, they work everywhere from hospitals to cancer treatment centers and drugstores. They are among the best-educated health care professionals — they earn four-year clinical doctorates, which include rotations and often postgraduate residencies — and make median salaries of $128,000 a year. They are also some of the most trusted and accessible health care professionals in the country, according to the National Association of Chain Drug Stores.

The person who actually hands you your filled prescription at the counter may be a technician, not a pharmacist. Technicians are support staffers who run the cash register; fill, count and bag prescriptions; and unload inventory. They’re entry-level employees who typically get on-the-job training or attend certificate programs and are paid a median $16 an hour.

Medication management services for customers can save billions in annual health care expenses, pharmacy groups estimate. Pharmacists said providing that advice is why many got into the business, yet they now have less opportunity to use those skills.

“I love being a pharmacist. I love being there for my patients,” Jerominski said. “We used to be able to have time to actually have in-depth conversations about how the patient is doing.”

But what might have once been five- to 10-minute patient consultations now typically happen in under a minute, she said. “It’s not ‘let us care for the patient.’ It’s ‘how fast can we get the people in and out?'”

Walgreens, like many large pharmacy chains, gives pharmacists a range of metrics to meet and monitors the time they spend on various tasks, from calls to patients to prescriptions filled and vaccinations given per week. The chains, pharmacists said, began to push them more when profit margins started shrinking a little over a decade ago.

“Basically, your day is timed out by the minute — it’s like the worst case of micromanaging you can imagine,” said an Alabama pharmacist who has worked at Walgreens, CVS and Rite Aid in the past decade.

Walgreens didn’t directly respond to questions about quotas and other metrics pharmacists must meet. In a statement, CVS said the metrics it uses to evaluate quality of service aren’t unique, saying, “Over the past two years we’ve actually reduced those metrics by half, providing us with a clearer picture of what’s working and where improvements may be needed.”

In a statement, a spokesperson for Rite Aid said that the company believes the focus for pharmacists “should be on counseling customers for positive health outcomes” and that it has “created efficiencies and tools to open up pharmacists’ time to consult and care for customers.”

While margins have tightened everywhere, pharmacists say the working conditions at some of the country’s largest chain pharmacies are different from those at many independently owned pharmacies. Jerominski’s husband, Shane, whom she met in pharmacy school, spent 10 years working at chain pharmacies and now manages an independent pharmacy. He was part of a class action lawsuit against one past employer, Walgreens, over wages and other issues. The suit was settled in 2014. He said his stress dropped markedly when he switched to working at an independent pharmacy.

“I see the difference. My level of autonomy is vastly different than Marilyn’s, and the amount of help that I get is different than Marilyn,” Shane said. There’s still plenty of stress at his busy pharmacy, he said, but staffing is far better, and he isn’t judged on the flurry of metrics he used to be beholden to. “I would never go back, honestly.”

Wages for a much greater proportion of pharmacists remained stagnant or fell compared to five years earlier, and the majority of pharmacists felt their job security and ability to find new work had decreased in the previous year. Many pharmacists told NBC News that they worry that leaving current jobs would mean taking pay cuts, if they could find jobs at all.

A survey of pharmacists by the Vermont Pharmacy Board last fall, months into the pandemic, gave further insight into how working conditions at chain pharmacies compare to those at other pharmacies. Nearly 250 pharmacists from chain, independent and hospital pharmacies responded to the survey (and responded at rates roughly reflecting each category’s share of Vermont pharmacists). They gave only retail chain pharmacies an “unfavorable rating” in any of the nine categories the survey examined. In fact, they gave the chains an “unfavorable rating” in every category, from patient safety to shift lengths and staffing.

Four in 5 retail chain pharmacists who responded to the Vermont survey said they worked more than 10 hours each shift; many reported that they arrived early or stayed late or never took meal breaks. Only 1 in 5 of the chain pharmacists said the number of pharmacists on duty was consistently adequate to provide safe patient care, and more than half said they had thought about leaving their jobs because of safety concerns.

Some of the conditions the board heard about “would be found unacceptable in a factory,” such as pharmacists’ developing kidney problems from skipping restroom breaks, said Gabriel Gilman, general counsel for the Vermont Office of Professional Regulation, which houses the state Pharmacy Board.

“The picture was grim,” Gilman said. “We went into it expecting to find things that alarmed us. And we were alarmed at what we found even so.”

“Twenty years ago, you could make a decent living off the reimbursement of the drug and you had time to spend with patients,” said Scott Knoer, CEO of the American Pharmacists Association. Knoer said that’s no longer true and that all retail pharmacies have been struggling.

“The incentive design of pharmacy is: ‘We pay you to fill prescriptions. We don’t necessarily pay you to make people better,'” said Antonio Ciaccia, a consultant who has worked with the state of Ohio and the American Pharmacists Association on prescription drug pricing transparency and pharmacy payment reform. He said that’s a bad model, especially combined with dwindling prescription profits.

“What you have is a race to the bottom, and at the bottom is an underresourced, heavily consolidated pharmacy marketplace that looks more like a fast food industry than a health care industry,” he said.

There’s no quick, easy fix. In Ohio, the state Medicaid program is trying a new payment model, which Ciaccia worked on, to allow pharmacists to bill insurers for clinical services.

Pharmacy trade groups and others are pushing for a national version of that model, giving pharmacists what’s known as “provider status.” A bipartisan federal bill to grant pharmacists the status was proposed repeatedly in the past decade, but it has yet to get a hearing.

While financial overhaul of the industry may be the ultimate goal for pharmacist groups, in the meantime, some states are also pushing to improve labor standards.

In recent years, states like California, Illinois and Virginia have created new rules, from capping shift lengths to mandating safe staffing levels and prohibiting excessive metrics. Vermont is working on new workplace condition rules based on its recent survey results.

About a third of all states now have regulations addressing pharmacy working conditions, according to the National Association of Boards of Pharmacy.

“There are challenges that are still huge concerns for boards of pharmacy … and I don’t see them going away any time soon,” said Carter, the head of the association. “Especially with the pandemic, I see them getting worse.”

For Marilyn Jerominski, it feels like the industry still has a long way to go. She knew she wanted to be a pharmacist when she was a sophomore in high school, but she said she never dreamed her job would look like it does today.

Adiel Kaplan is a reporter with the NBC News Investigative Unit.

Vicky Nguyen is the investigative and consumer correspondent for NBC News. See her reports on “TODAY,” “Nightly News with Lester Holt,” and MSNBC.