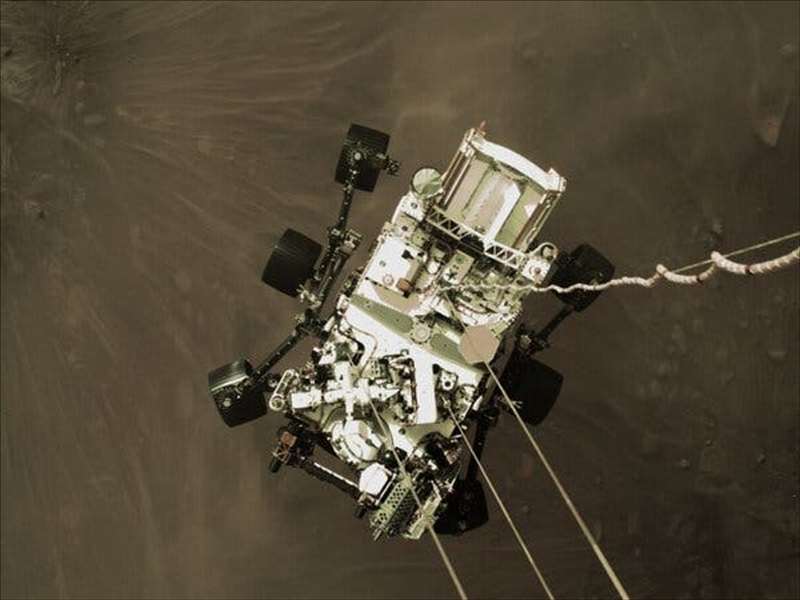 Scientists working on the mission are eagerly scrutinizing the first images sent back to Earth by the robotic explorer.

“As scientists, we’re used to the engineers showing us animations of the rover, and that’s at first what I thought this was,” said Katie Stack Morgan, a deputy project scientist for the mission at NASA’s Jet Propulsion Laboratory, referring to one of the pictures. “And then I did a double take and said that’s the actual rover.”

“We are overwhelmed with excitement and overjoyed to have successfully landed another rover on the surface of Mars,” said Aaron Stehura, a Jet Propulsion Laboratory engineer on the landing team.

The system was also used during the landing of the Curiosity rover in 2012 and contributed to the safe arrival of both robotic explorers on the tricky terrain of the fourth planet from the sun. After the rover set down, the sky crane flew away to a safe location where its landing would not cause any damage to the mission.

Another photograph, taken from the Mars Reconnaissance Orbiter, a NASA spacecraft that has been studying Mars from space since 2006, showed the rover hanging from its parachute as it drifted over the Martian terrain. The rover hangs over Jezero Crater, the site that NASA selected for its latest Mars landing.

The rover landed on a “pool-table-flat” spot littered with small rocks in the middle of Jezero Crater, thought to be the dry basin of a lake that existed 3.8 billion years ago. It is sitting near the edge of a rougher area of fractured terrain that the scientists have named Canyon de Chelly after the Navajo site of the same name in Arizona. The rover is about 1.25 miles from a river delta scientists think is a prime spot to look for chemical signatures of ancient microbial life.

One of the mission’s first orders of scientific business will be to study the rocks in that crater and to work out whether they are volcanic basalt or sedimentary rocks. If the rocks are sedimentary, they might have been habitable long ago; if they are volcanic, it will allow geologists to calculate their age.