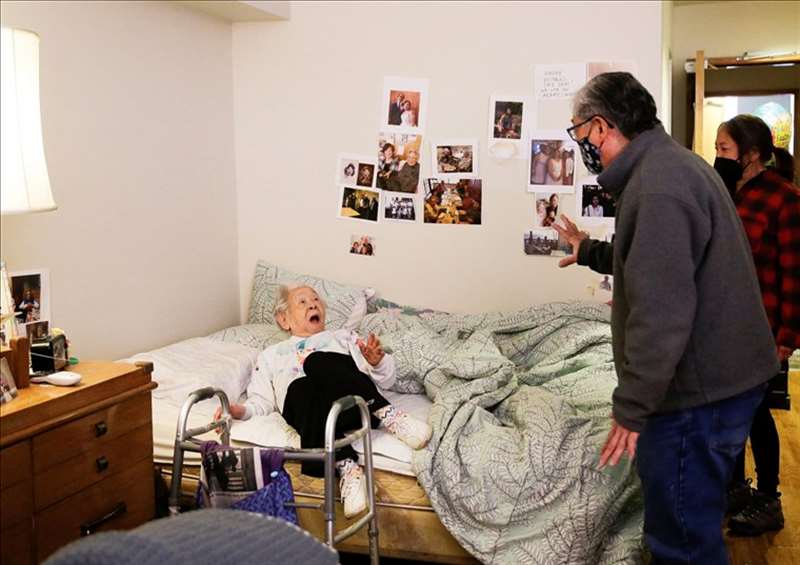 Mark Uomoto, like many others, wasn’t able to visit with his mom, Yoshia, for more than a year during the coronavirus pandemic.

But finally that all changed on Tuesday, when he was able to surprise his 98-year-old mom at her assisted living home in a sweet moment that was captured on camera.

Fully vaccinated, Mark, 68, and his cousin Gail Yamada arrived at Nikkei Manor in Seattle to visit Yoshia on Tuesday. Previously, they had been regulated to just visits through the lobby window, which has been standard protocol across the country.

When they learned they could visit in person, Mark said they decided to make it a fun surprise for his mom.

“We wanted to carefully orchestrate it right,” he told TODAY. “It was so wonderful to hear, see her expression of excitement that she had because we’ve not seen Mom, my cousin and I, for over a year… So it was wonderful to see her and it was more heartwarming for me to see her reaction and so happy to see us.”

The photos show his mother absolutely shocked and ecstatic to see her son in person.

Mark explained that his mother is “quite hard of hearing” which has made visiting through the window difficult. He’s had to use a tablet to ask her questions but once they were visiting in person, he had a chance to catch up.

Yoshia’s sister also used to be a resident at Nikkei Manor, an assisted living facility primarily serving Japanese American seniors, before she died. Her daughter, Yamada, was happy to visit her aunt with Mark on Tuesday.

“true love..pure as you can get??mother’s love??,” one person commented.

Mark said he understood that his situation was similar to so many others and that’s why he believes it touched so many people.

“They’re all feeling the same way too,” he said. “They like to see that expression of love and joy, it warms their hearts. It’s wonderful to read those reactions like that.”

After all, he said, it was a moment that he’ll always treasure.

“It was so wonderful to see her expression and joy and it was wonderful for me to be with mom,” he said. “So that will be with me forever, that moment there.”

Samantha Kubota is a digital journalist and editor for TODAY.com.