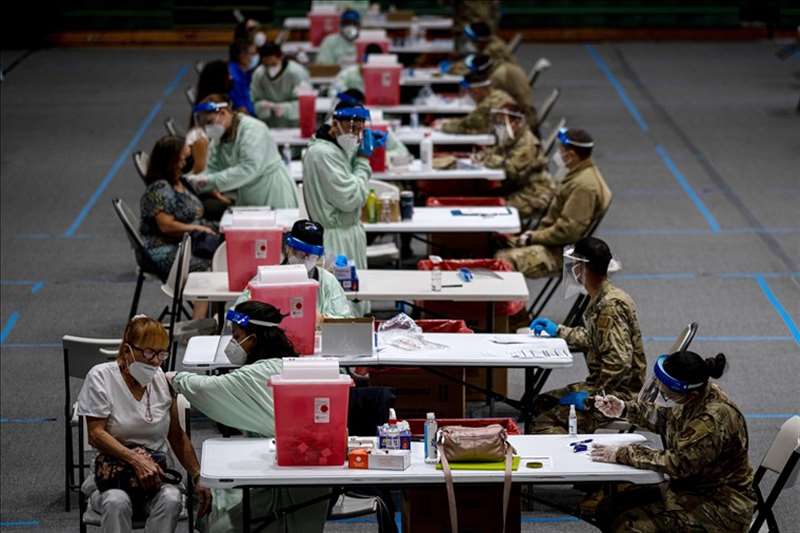 Janny Rodriguez, 47, a community leader in the neighborhood of Barreal in Peñuelas, Puerto Rico, is an operations supervisor at an asphalt plant. During the height of the pandemic last March, he couldn’t stop working, since he’s one of a few workers tasked with maintaining the composite material liquid.

Rodriguez and his colleagues wore masks, kept their social distance, lived through stringent curfews and had their temperature checked and their hands and shopping carts cleaned every time they went into a supermarket or drug store.

A year into the pandemic, his fears of Covid-19 haven’t come true. So far, neither his children nor mother have been infected with the virus. In fact, no one in his neighborhood, which is home to roughly 200 families, has been infected, Rodriguez said.

Since the start of the pandemic, at least 94,336 Covid-19 cases have been confirmed in Puerto Rico, an island of 3.2 million. The virus has killed at least 2,073 people in the island so far.

Puerto Rico went on lockdown the following month while the curfew was still in place. Puerto Ricans had to stay home at all times. If they left, it could only be for essential purposes and they had to be back home before the nighttime curfew.

Puerto Rico was also among the first U.S. jurisdictions to issue a mask mandate, alongside New Jersey.

“Most people don’t leave the house without first grabbing their phones. Now, people grab their face masks first and then their phones,” Rodriguez said in Spanish.

Throughout most of last year, Rodriguez remembers the government would send an alert to every person’s phone to remind them the curfew was coming up.

“At the beginning it was the right thing to do, I can’t deny it. Some people were critical of it, but if it was not done like that, things would have been worse,” Rodriguez said. “Many criticized the efforts, saying that it was very hasty, but they helped control the pandemic a lot.”

Rodriguez recently went to his local shopping mall to get college books for his daughter. People could only go in through specific entrances, so guards could keep count of how many people were inside at a given time. Businesses also have signs saying how many people can be allowed in the store, and before stepping in, people must have their temperatures checked and their hands sanitized.

When he goes to the supermarket, Rodriguez can’t just grab the first shopping cart he sees. He has to grab one that has been previously disinfected. Before he puts his groceries on the conveyor belt for checkout, the cashier disinfects the area. It’s been like that for island residents since last year — and islanders complied.

“Those are the things that make me feel safer,” Rodriguez said. “Also, the fact that people are wearing their masks and that the government is doing what it can to discourage crowds as it tries to reopen safely.”

“I do not wish those tragedies on my people, but if they had not happened, I wonder if the tragedy of the pandemic would have been greater,” he said in Spanish. “Because if not, the people would not have taken it seriously and the closure of the country would have protested.”

Many of these grassroots efforts established between April and May were eventually adopted by the Puerto Rico Health Department as official methods to address the pandemic, Colón-Ramos said.

While it remains unclear if the May peak ever came, officials lifted the lockdown on June 12. But they kept the curfew in place as Puerto Rico continued to slowly reopen businesses with restrictions in place.

Almost all of the Covid-19 deaths in Puerto Rico happened between August and December, Colón-Ramos said. In his view, “many of those 2,000 lives could have been saved if the necessary systems had been established when we closed in April and May,” especially since the number of cases had been so low and people on the island were mostly complying with the restrictions.

“Even though things could have gone a lot worse than they did, that is still one of my biggest frustrations,” Colón-Ramos said, adding that if he were to grade Puerto Rico’s Covid-19 response so far, he would give it a B.

Currently, Puerto Ricans are not allowed to leave their homes after midnight. The curfew has changed over time depending on the number of new Covid-19 cases being reported on the island, making it the longest pandemic-related curfew of any U.S. jurisdiction.

Most businesses are now operating at 50 percent capacity — except bars, night clubs and stadiums, which still remain closed. Shopping malls are open but only allow one person per 75 square feet.

Since Covid-19 hospitalizations have gone down so dramatically, most patients currently in intensive care are those with chronic conditions whose care was interrupted amid the pandemic, not people with Covid-19, Ramos said.

Families are now able to visit older relatives in nursing homes and jails for the first time in a year, since these populations have been vaccinated, Ramos said. “That’s also important because they have suffered a lot not seeing their loved ones. It affects their mental health,” he said.

While in Rodríguez’s view the vaccinations are still slower than he anticipated, he remains hopeful. Ramos said Puerto Rico is set to receive about 100,000 Covid-19 vaccines weekly, an upgrade from 40,000. As more vaccines become available, Ramos remains optimistic, saying Puerto Rico could reach herd immunity sometime between August and September.

Ramos-Colón also remains optimistic, saying he “genuinely thinks that the pandemic could end in upcoming months.”

“But the real tragedy would be if we do not emerge from this pandemic with a strengthened health system,” he said.

Nicole Acevedo is a reporter for NBC News Digital. She reports, writes and produces stories for NBC Latino and NBCNews.com.