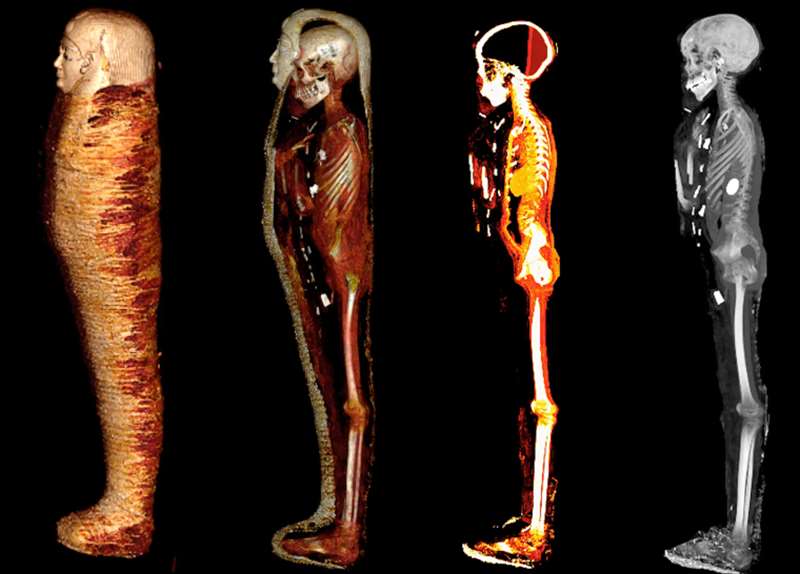 Radiologists at Cairo University in Egypt used CT scans to non-invasively unwrap the remains, uncovering signs of wealth as well as efforts to ensure his safe passage to the afterlife.

Egyptian embalmers placed amulets to protect and provide vitality for the body in the afterlife, and a gold tongue amulet was placed inside the mouth to ensure the deceased could speak in the afterlife.

Sahar Saleem, a professor of radiology at the faculty of medicine at Cairo University and a co-author of the study, said the undisturbed remains were revealing for both the socio-economic status of the boy — likely to have come from a wealthy family — and the significance of amulets in the afterlife, which was a central focus of ancient Egyptians’ complex belief system. “The heart scarab is mentioned in chapter 30 of the Book of the Dead: It was important in the afterlife during judging the deceased and weighing the heart against the feather of the goddess Maat,” said Saleem, who has been digitally unwrapping mummies for years, including Pharaonic royals.

“It was placed inside the torso cavity during mummification to substitute for the heart if the body was ever deprived of this organ,” Saleem explained in the study. “The heart scarab silenced the heart on Judgement Day, so as not to bear witness against the deceased.”

The mummified remains were discovered in 1916 at a cemetery in Nag el-Hassay in southern Egypt that was used between around 332 and 30 B.C., in what’s known as the Ptolemaic period. It was stored unexamined in the basement of the Egyptian Museum in Cairo until the new study.

Experts were able to determine that the boy was 14 or 15 years old, using the degree of bone fusion and the non-erupted wisdom teeth. He was 4 foot 2 (128 centimeters) and uncircumcised, and a cause of death could not be determined, the study said.

The boy’s remains were laid inside two coffins, an outer with a Greek inscription in black, and an inner wooden sarcophagus.

“The sandals were probably meant to enable the boy to walk out of the coffin,” Saleem wrote. “According to the ancient Egyptians’ ritual Book of The Dead, the deceased had to wear white sandals to be pious and clean before reciting its verses.”

Joann Fletcher, an Egyptologist and a professor at the University of York who was not involved with the study, told NBC News it demonstrated the value of “non-invasive, non-destructive forms of analysis.”

Amulets were both placed inside the “golden boy” and between the wrappings used to mummify the remains, the study published Tuesday found. The scan revealed they were arranged in three columns.

“It is good to see such scanning techniques used to examine the way these characteristic amulets were placed at specific points on the body where they served a protective purpose,” Fletcher said.

Many of the amulets were metal, likely gold, and the other amulets were made of faience, stones or fired clay, the study revealed.

“All too often in the past, they’ve been removed from their original context on the body, and are therefore seen as little more than pieces of jewelry which is to misunderstand their actual purpose as a potent amulet,” Fletcher added.

The new study comes as museums in the U.K. reckon with whether the term “mummy” is appropriate to describe mummified remains, because of what some say are its “dehumanizing” connotations.

“Where we know the name of an individual we use that, otherwise we use the term ‘mummified man, woman, boy, girl or person’ on our labels, because we are referring to people, not objects,” a spokesperson for National Museums Scotland said in an email.

“The word ‘mummy’ is not incorrect, but it is dehumanizing, whereas using the term ‘mummified person’ encourages our visitors to think of the individual.”

Charlene Gubash is an NBC News producer based in Cairo. Gubash, a native Minnesotan, has lived and worked in the Egyptian capital since 1985.