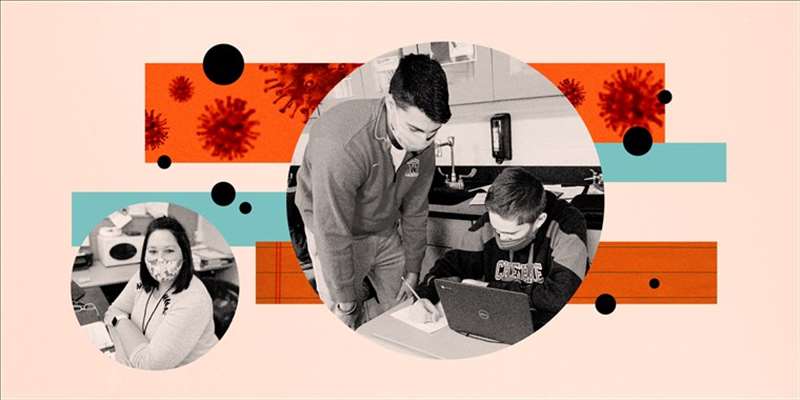 Stefanie Fernandez usually spends her workweek in the finance office of Independent Stave, a company that manufactures oak barrels for bourbon and other spirits, headquartered in Lebanon, Missouri.

But once every week or two since December, Fernandez has trailed her son into his middle school when she drops him off for classes. She checks in at the office, picks up a binder with “sub notes” and reports to a classroom.

“Good morning, class,” she greets the masked students. “I’m Mrs. Fernandez, and this is what we’re going to do today.”

The goal is to address a substitute teacher crisis that has left districts across the country struggling to find substitutes when teachers are absent because of Covid-19 or for other reasons.

“I don’t think that we fixed the problem, but we are part of the solution,” said Jeremiah Hough, a vice president at the barrel manufacturer.

Hough is also vice president of the Lebanon School Board, so he is keenly aware of the challenges the district faces. Hough proposed offering substitute teaching opportunities to his company’s administrative employees in December, after school administrators warned that the district was close to sending all of its roughly 4,300 students home to learn on virtual platforms because too many teachers were sick or quarantined.

The support from the local business provided a morale boost and good publicity, said David Schmitz, the district’s superintendent. “It’s been remarkable in helping us get the message out that we need help,” he said.

Almost no one thinks that a heavy reliance on substitutes — who usually have no teacher certification and minimal classroom experience — is ideal for students. But by getting substitutes from its community into classrooms in this unusual year, the Lebanon district has managed, for now, to find temporary, local solutions to a problem that is confounding educators in its state and across the country.

The desperate search for substitute teachers has led some states and school districts to lower qualifications for the people entrusted to educate and supervise America’s schoolchildren at a moment when learning losses are already stacking up.

When substitutes aren’t available, principals often call upon other teachers on campus to cover for absent teachers. But even that can harm learning, said Ingersoll, who studies what he calls “out of field” teaching — teachers who are assigned to subjects that don’t match their education or training.

“There’s all these stopgaps that happen, that the public doesn’t know about, which quite often are detrimental to learning,” he said.

Brent Snyder, principal of Lebanon Middle School, remembers the early months of this school year as a frantic time.

“We would be short several staff positions every single day,” he said. “My secretary would spend the entire day calling different teachers on their plan periods to ask them to go cover a classroom. We would have classrooms that would literally have a different teacher every period of the day.”

Students lost out on instruction time, as teachers used the first 15 minutes or so of each period figuring out what was going on in the class. Kids were falling behind, and teachers were in despair.

“I would walk around the school and I could see the stress on their faces,” Snyder said. “I’d ask how they were doing, and they would just tell me, ‘I’m exhausted.'”

About the same time the local barrel manufacturer stepped in to help, the district also offered a financial incentive to cast a wider net.

The Lebanon School District pays its substitutes $85 a day — about average for districts in Missouri. That’s slightly above the state’s $10.30-an-hour minimum wage, but it wasn’t much of an enticement for a job that’s already difficult and even more so during a pandemic. In December, the School Board approved a temporary $200 bonus when a substitute completes a fifth day of work.

“We wanted to provide a bonus, but we also wanted people to commit to multiple days for us,” said Schmitz, the district’s superintendent.

In a rural school district where leaders watch every dollar, the bonuses were “a big price tag,” Schmitz said. But it was worth it to be able to recruit substitutes.

While the Lebanon School District achieved some success with creative measures, broader solutions to the substitute teacher crisis have been harder to find.

The main strategy states have used is simply to make it easier to become a sub. At the start of this school year, the Missouri State Board of Education suspended its requirement that applicants have 60 college credits to be certified as substitute teachers. For a six-month period scheduled to end Sunday, anyone with a high school diploma or its equivalent can substitute if he or she completes a 20-hour online training session and passes the necessary background check.

“Unfortunately, it wasn’t working,” Solan said. He appealed to graduates from 2017 on to apply to substitute in the district, and quickly created a pool of energetic young people happy to serve their community with work they could schedule around online classes.

As with the Lebanon School District, Cheshire has managed to find a creative solution in a difficult year. But questions about who should be in charge of America’s schoolchildren when their teachers are absent will outlast the pandemic.

“I understand that you may need to adapt your criteria to the emergency,” she said. “But the only way you can really help kids catch up is to focus on the quality of the instructors. Would you want to be vaccinated by an uncredentialed, unprepared nurse? I don’t think so.”

“For sub teachers, you have to think about jobs like Uber drivers and the gig economy,” he said. “You have to compete with all the alternative opportunities.”

Schmitz, the Lebanon superintendent, said the pandemic has shined a spotlight on long-standing staffing issues. Like many of his peers in Missouri, he thinks the state should permanently waive its college credit requirement for subs.

“We’ve always had challenges getting substitutes,” he said. “I believe there are talented and gifted people out there who may not have the 60-plus hours in college.”

Meanwhile, Stefanie Fernandez, the finance administrator who’s been taking time off from her job at the barrel manufacturer to help the Lebanon School District meet its need for substitutes, said she was enjoying the experience — for now.