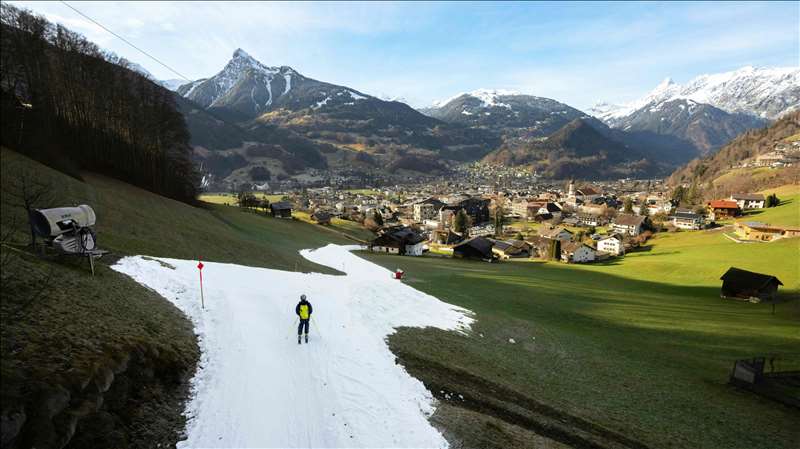 Countries across the continent saw the warmest start to the year ever measured. The weather has forced ski resorts to close trails, with sparser than usual snow cover.

In the coastal Spanish town of San Sebastián, residents swapped sweaters for T-shirts and headed to the beach for a swim. In Rome, tourists and locals strolled in the sunshine in light sweaters. And in low-lying areas of the Pyrenees, a lack of snowfall forced some French ski resorts to close trails.

An unusually warm January broke dozens of weather records across Europe. Meteorologists called the warm spell and the records it broke “staggering,” as several countries saw the hottest start to the year ever measured.

Residents in Warsaw enjoyed the balmiest start to the year since 1999, with a high of 66 degrees Fahrenheit. Latvia, Lithuania and the Netherlands also experienced record warmth on New Year’s Day. France recorded the warmest winter night since 1947 just before the new year, said Météo France, the country’s national forecaster.

While tying a single heat wave or warm spell to climate change requires analysis, scientists say that heat waves around the world are becoming hotter, more frequent and longer lasting.

“The record-breaking heat across Europe over the new year was made more likely to happen by human-caused climate change, just as climate change is now making every heat wave more likely and hotter,” said Dr. Friederike Otto, senior lecturer at the Grantham Institute — Climate Change and Environment at Imperial College London. “As long as greenhouse gas emissions continue, heat waves like these will become increasingly common and severe.”

Despite being a balmy break, the uncharacteristic warmth disrupted some winter activities and left many disconcerted.

It forced some ski resorts in low-lying mountain ranges like the Pyrenees and the Vosges to close trails during their peak season. In Switzerland, where temperatures hit a record 68 degrees, north of the Alps on New Year’s Day, the Swiss resort of Adelboden-Lenk, which will host a skiing World Cup event next weekend, brought in artificial snow.

“This winter is being like summer, suffocating,” said Josu Cires, 52, who on Wednesday was driving to his job selling beer in the city of Bilbao in northern Spain, which has seen temperatures above 77 degrees — more typical of July than January. Mr. Cires said that he was struggling with the heat. “The landscape is beautiful, but the body suffers.”

The unusual heat in Spain’s Basque Country, normally one of the country’s rainiest areas, prompted its regional government on New Year’s Day to issue an emergency alert, citing risk of forest fires.

In Germany, one headline proclaimed, “T-shirt weather on New Year’s Eve in Bavaria.” In a normal year, visitors to the region’s Christmas markets fight off the cold with mulled wine. In Munich, the temperature on New Year’s Eve was above 68 degrees, the highest ever measured on that date.

A fast-moving, warm air mass from the Tropical Atlantic moved toward Western Europe, prompting the unusual heat, said Robert Vautard, a scientist and a coordinating lead author for the United Nations Intergovernmental Panel on Climate Change.

“It’s completely exceptional at this time of year,” he added. “It’s what we used to call record-shattering extremes.”

“The temperatures observed in Europe are staggering,” Scott Duncan, a meteorologist based in London who was monitoring the temperature increases, said in an email. “We observed longstanding records broken by large margins across several countries.”