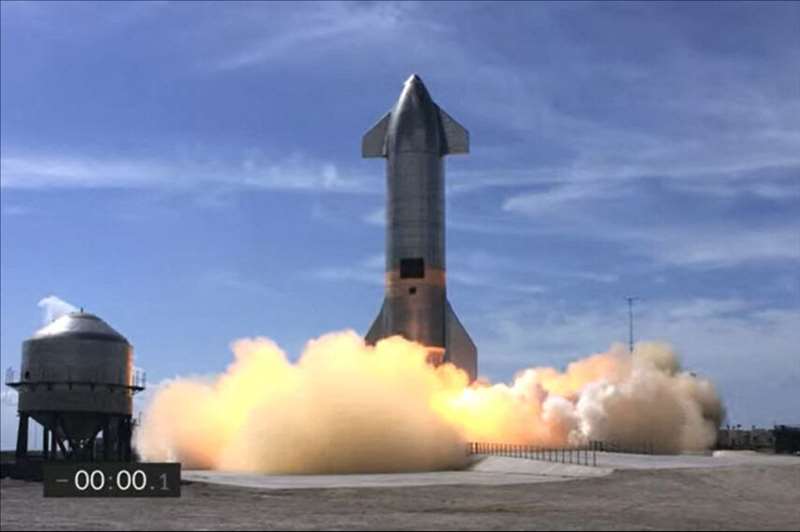 Two earlier flights of the Starship rocket crashed spectacularly. This one returned to the ground in one piece, then blew up.

On Wednesday, SpaceX launched another high-altitude flight of Starship, a huge next-generation spacecraft that Elon Musk, the founder and chief executive of the private rocket company, dreams of sending to Mars. It returned to the ground and set down in one piece, but then lit up in another fiery blast minutes after the landing.

As the sun set over the test site in Boca Chica, Tex., close to Brownsville, the latest prototype, designated SN10, lifted off, its stainless steel exterior gaining a purple hue as it ascended toward an altitude of just over six miles, well below the orbital heights that SpaceX one day intends to achieve.

It was the second launch attempt of the day. Three hours earlier, liftoff was aborted with just a fraction of a second left in the countdown. The engines had already ignited but were then shut off when the computer on board the Starship detected too much thrust from one of the engines. The engineers decided that the problem was not significant, adjusted the software, refueled the rocket and tried again.

At about 6:15 p.m. Eastern time, the three engines ignited again, and this time they stayed on. The rocket rose into the Texas sky, and, by design, the engines shut down one by one as the rocket approached an altitude of six miles.

The Starship then tipped over to a horizontal position, in essence belly flopping through the atmosphere in a controlled fall back toward the ground. The rocket then fired its engines again to flip back into a vertical position and slowed down to a gentle landing.

As the smoke cleared, SN10 was still standing, but tilted. Mr. Insprucker declared the test a success. While earlier flights to this altitude had ended in fiery crashes, this time the rocket landed in one piece. But the landing legs appeared to fail, leaving the rocket standing but leaning at the landing pad.

“The key point of today’s test flight was to gather the data on controlling the vehicle while re-entering,” Mr. Insprucker said on the webcast. “And we were successful in doing so.”

A leak in a propellant tank may have caused the explosion.

After an investigation, the F.A.A. allowed SpaceX to go forward with the February launch. When that flight ended in another crash, the agency again asked for an investigation, which appears to have proceeded with less difficulty. The agency granted approval for the test on Wednesday.

However, many are skeptical about Mr. Musk’s assertion that the company is just a few years from sending a Starship to Mars, saying he has repeatedly set timelines for SpaceX that proved far too optimistic in how quickly they have come to pass.

Instead, several catastrophic failures happened because of faulty welding. When the propellant tanks stopped rupturing, two of the prototypes made short successful flights last year. Those earlier Starship prototypes resembled spray paint cans with their labels removed, rising nearly 500 feet using a single rocket engine before setting back down at the Texas test site.