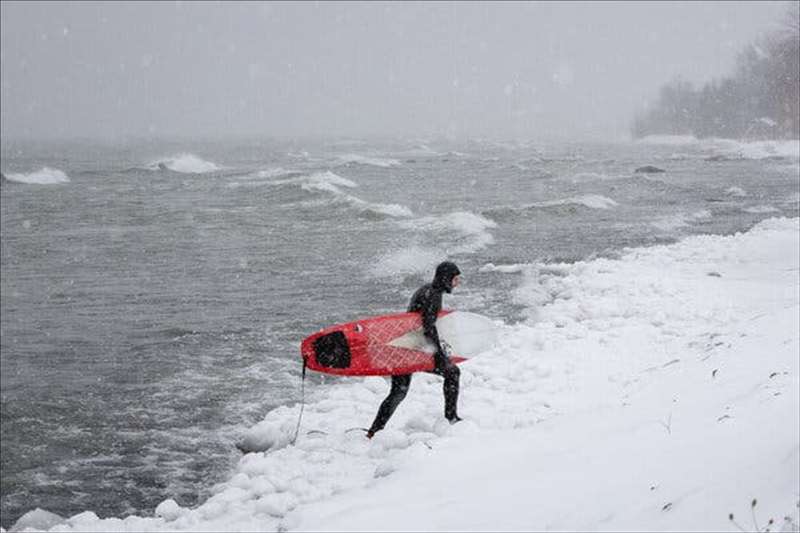 Growing numbers of surfers are taking to the Great Lakes — even when the weather is well below freezing.

It’s a cold Friday morning in late January. The snow has been falling all night. With two friends, Curtis Eichenberger and Brian McElroy, I’m heading northwest from the town of Collingwood, Ontario, to the shores of Lake Huron in Bruce Country. It’s a two-hour drive, and we’re hoping the ice has taken hold of the shoreline.

We park at the end of a rural road and begin the 20-minute walk to the shore. Curtis and Brian are in wetsuits and jackets, carrying their surfboards, walking down a forest path in a heavy snowstorm.

I can’t help thinking that this is a quintessentially Canadian experience.

Our first glance at the water has Curtis and Brian excited: The waves are head high, and the sets are consistent. There are a couple of other hardy surfers out here, but it’s better than their local spot, which recently drew a crowd of some 25 people.

In recent years there’s been a significant increase in the popularity of lake surfing in North America. Unlike ocean surfers, who depend on tides, lake surfers depend on strong, sustained winds to build up swells. The stormy winter months often bring the biggest waves — and therefore the best surfing conditions.

January water temperatures on the Great Lakes are typically between 32 and 40 degrees Fahrenheit. Without a wetsuit in such temperatures, most people lose dexterity in just a few minutes. Exhaustion or loss of consciousness would occur after 15 to 30 minutes.

Still, the Great Lakes are becoming wintertime hot spots for the ocean-starved surfers who live in the area. Desperate for waves, devotees are often glued to local surf chat groups and obsessive about wind and wave forecasts.

At a moment’s notice, they’re ready to clear their schedules, drive for hours, squeeze into their 6-millimeter-thick neoprene wetsuits and don (even thicker) booties and gloves, all in hopes of catching a good swell before the waves subside — or before they lose too much body heat.

Curtis and Brian have been friends since they were kids, growing up in a small ski town north of Toronto, on Georgian Bay. They first had a taste of ocean surfing as teenagers on separate trips to New Zealand around 2003. Since then, they’ve surfed in dreamy — and warm — beach destinations all over the world: Australia, California, Costa Rica, El Salvador, Hawaii, Mexico, Nicaragua, Portugal.

“It was out of the love for ocean surfing that I ventured out into the Great Lakes,” said Brain, who started surfing here around 2003. “Growing up landlocked, you find a way to surf throughout the year.”

All around the Great Lakes region — and locally in places such as Kincardine, Port Elgin and, of course, Toronto — there are surf shops that sell expensive winter surfing gear, including wetsuits and surfboards. Some of the more passionate surfers have started shaping their own surfboards in their basements or garages.

Surfing on the Great Lakes is nothing new; people have been doing it for many decades. But what used to be a relatively niche hobby along secluded shorelines is now in full view on social media, where interest in the sport is compounding.

The coronavirus pandemic has also added to its popularity. With travel restrictions in place, and with many hockey rinks, ski hills and exercise facilities closed, people have been searching for new types of exercise and entertainment — and, in particular, activities that are independent, informal and can be done closer to home and while distanced from others.

After two hours, Curtis and Brian emerge from the water with freezing extremities. Icicles cling to their eyebrows.

Taking shelter in the trees, on the snow-covered ground, the two friends are invigorated, excited like the teenage versions of themselves who’d just learned to surf.