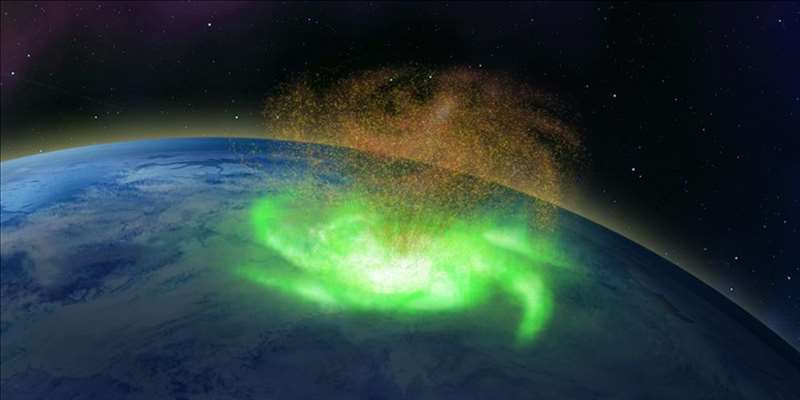 When it comes to extreme weather, it’s safe to say a “space hurricane” qualifies.

Scientists said last week they observed a previously unknown phenomenon — a 620-mile-wide swirling mass of plasma that roiled for hours in Earth’s upper atmosphere, raining electrons instead of water.

The researchers labeled the disturbance a space hurricane because it resembled and behaved like the rotating storm systems that routinely batter coastlines around the world. But until now, they were not known to exist.

“It really wasn’t expected,” said Larry Lyons, a professor of atmospheric and oceanic sciences at the University of California, Los Angeles. “It wasn’t even theoretically known.”

“You could see flows of plasma going around, which were like the winds of the space hurricane,” he said. “These flows were strongest at the edge and decreased as you moved toward the eye in the center, before picking up again on the other side, just like the flow of air in a regular hurricane.”

But that’s perhaps where the similarities end. Unlike with regular hurricanes that can dump huge amounts of precipitation over Earth’s surface, the scientists instead observed electrons raining into the upper atmosphere.

Scientists routinely monitor space weather because radiation from particles from the sun can wreak havoc on satellites in orbit and can occasionally disrupt infrastructure on the ground, such as surges in power lines. Since the observed space hurricane occurred over the North Pole, it’s not thought that it would pose many dangers to people at lower latitudes, but there are implications for communications and navigation systems.

“People who are interested in satellite communications and GPS signals are going to care a lot,” Lyons said.

He added that he and his colleagues are planning to conduct follow-up studies to determine how often space hurricanes of this size and duration occur, and whether smaller, shorter storms happen more frequently.

Lyons said this type of discovery is one that could have been easily missed had the researchers not spotted clues in the six-year-old data and had the patience to stitch together all the threads.

“We had various instruments measuring various things at different times, so it wasn’t like we took a big picture and could see it,” he said. “The really fun thing about this type of work is that we had to piece together bits of information and put together the whole picture.”