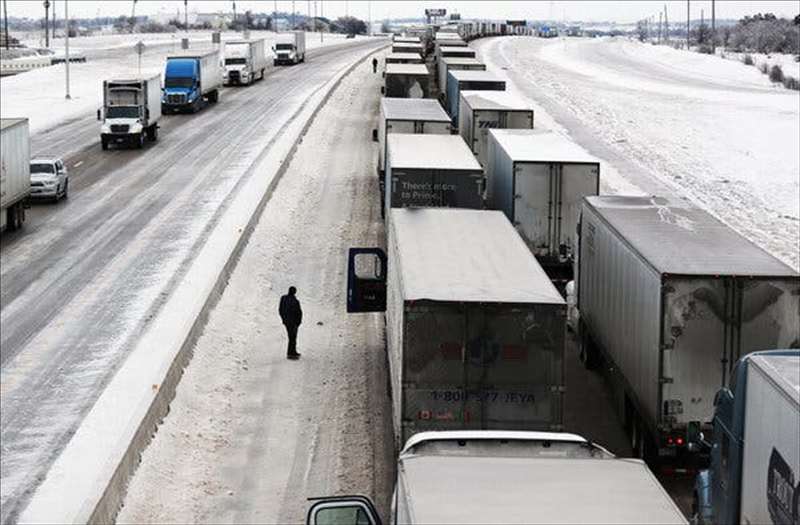 Even as Texas struggled to restore electricity and water over the past week, signs of the risks posed by increasingly extreme weather to America’s aging infrastructure were cropping up across the country.

The crisis carries a profound warning. As climate change brings more frequent and intense storms, floods, heat waves, wildfires and other extreme events, it is placing growing stress on the foundations of the country’s economy: Its network of roads and railways, drinking-water systems, power plants, electrical grids, industrial waste sites and even homes. Failures in just one sector can set off a domino effect of breakdowns in hard-to-predict ways.

Much of this infrastructure was built decades ago, under the expectation that the environment around it would remain stable, or at least fluctuate within predictable bounds. Now climate change is upending that assumption.

“We are colliding with a future of extremes,” said Alice Hill, who oversaw planning for climate risks on the National Security Council during the Obama administration. “We base all our choices about risk management on what’s occurred in the past, and that is no longer a safe guide.”

Sewer systems are overflowing more often as powerful rainstorms exceed their design capacity. Coastal homes and highways are collapsing as intensified runoff erodes cliffs. Coal ash, the toxic residue produced by coal-burning plants, is spilling into rivers as floods overwhelm barriers meant to hold it back. Homes once beyond the reach of wildfires are burning in blazes they were never designed to withstand.

Problems like these often reflect an inclination of governments to spend as little money as possible, said Shalini Vajjhala, a former Obama administration official who now advises cities on meeting climate threats. She said it’s hard to persuade taxpayers to spend extra money to guard against disasters that seem unlikely.

But climate change flips that logic, making inaction far costlier. “The argument I would make is, we can’t afford not to, because we’re absorbing the costs” later, Ms. Vajjhala said, after disasters strike. “We’re spending poorly.”

The Biden administration has talked extensively about climate change, particularly the need to reduce greenhouse gas emissions and create jobs in renewable energy. But it has spent less time discussing how to manage the growing effects of climate change, facing criticism from experts for not appointing more people who focus on climate resilience.

“I am extremely concerned by the lack of emergency-management expertise reflected in Biden’s climate team,” said Samantha Montano, an assistant professor at the Massachusetts Maritime Academy who focuses on disaster policy. “There’s an urgency here that still is not being reflected.”

A White House spokesman, Vedant Patel, said in a statement, “Building resilient and sustainable infrastructure that can withstand extreme weather and a changing climate will play an integral role in creating millions of good paying, union jobs” while cutting greenhouse gas emissions.

And while President Biden has called for a major push to refurbish and upgrade the nation’s infrastructure, getting a closely divided Congress to spend hundreds of billions, if not trillions of dollars, will be a major challenge.

Heightening the cost to society, disruptions can disproportionately affect lower-income households and other vulnerable groups, including older people or those with limited English.

“All these issues are converging,” said Robert D. Bullard, a professor at Texas Southern University who studies wealth and racial disparities related to the environment. “And there’s simply no place in this country that’s not going to have to deal with climate change.”

In September, when a sudden storm dumped a record of more than two inches of water on Washington in less than 75 minutes, the result wasn’t just widespread flooding, but also raw sewage rushing into hundreds of homes.

Washington, like many other cities in the Northeast and Midwest, relies on what’s called a combined sewer overflow system: If a downpour overwhelms storm drains along the street, they are built to overflow into the pipes that carry raw sewage. But if there’s too much pressure, sewage can be pushed backward, into people’s homes — where the forces can send it erupting from toilets and shower drains.

This is what happened in Washington. The city’s system was built in the late 1800s. Now, climate change is straining an already outdated design.

DC Water, the local utility, is spending billions of dollars so that the system can hold more sewage. “We’re sort of in uncharted territory,” said Vincent Morris, a utility spokesman.

“Whenever we study dam failures, we often find there was a lot of complacency beforehand,” said Bill McCormick, president of the Association of State Dam Safety Officials. But given that failures can have catastrophic consequences, “we really can’t afford to be complacent.”

Higher storm surges can knock out coastal power infrastructure. Deeper droughts can reduce water supplies for hydroelectric dams. Severe heat waves can reduce the efficiency of fossil-fuel generators, transmission lines and even solar panels at precisely the moment that demand soars because everyone cranks up their air-conditioners.

Climate hazards can also combine in new and unforeseen ways.

The greatest risk came from heavy rain and snowfall exceeding the design parameters at 53 plants.

Scott Burnell, an Nuclear Regulatory Commission spokesman, said in a statement, “The NRC continues to conclude, based on the staff’s review of detailed analyses, that all U.S. nuclear power plants can appropriately deal with potential flooding events, including the effects of climate change, and remain safe.”

Several climate-related risks appeared to have converged to heighten the danger. Rising seas and higher storm surges have intensified coastal erosion, while more extreme bouts of precipitation have increased the landslide risk.

Add to that the effects of devastating wildfires, which can damage the vegetation holding hillside soil in place, and “things that wouldn’t have slid without the wildfires, start sliding,” said Jennifer M. Jacobs, a professor of civil and environmental engineering at the University of New Hampshire. “I think we’re going to see more of that.”

And there is no easy fix. Elevating the tracks would require also raising bridges, electrical wires and lots of other infrastructure, and moving them would mean buying new land in a densely packed part of the country. So the report recommended flood barriers, costing $24 million per mile, that must be moved into place whenever floods threaten.

The blasts at the plant came after flooding knocked out the site’s electrical supply, shutting down refrigeration systems that kept volatile chemicals stable. Almost two dozen people, many of them emergency workers, were treated for exposure to the toxic fumes, and some 200 nearby residents were evacuated from their homes.

Leaks from toxic cleanup sites, left behind by past industry, pose another threat.

“We should be evaluating whether these facilities or sites actually have to be moved or re-secured,” said Lisa Evans, senior counsel at Earthjustice, an environmental law organization. Places that “may have been OK in 1990,” she said, “may be a disaster waiting to happen in 2021.”