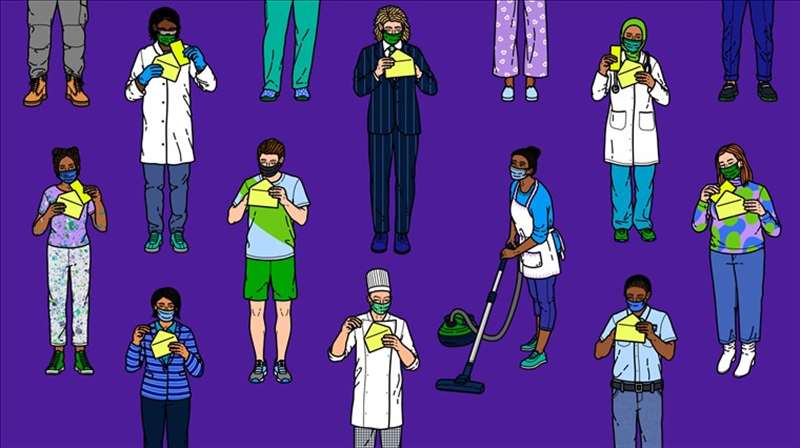 When the coronavirus pandemic began to upend daily life a year ago, Joyce Barnes was among the essential workers for whom remote work wasn’t an option.

Barnes, 62, of Virginia has been a home care worker for over 30 years. With wages just above the federal minimum and no paid sick leave, she scrounged for personal protective gear to help shield her from the virus as she took care of elderly and handicapped patients.

“It was like a choice: ‘Do I work today? Or be short on my paycheck?’ I know I’m not feeling good, but what should I do?” she said in a phone interview. “You have no choice but to keep going and praying.”

“We are the forgotten ones,” Barnes said. “And this is why we have to fight.”

Because much of the work is in the cash economy, experts say, the labor data aren’t fully captured by the Bureau of Labor Statistics. It also makes it more difficult to qualify for unemployment pay, a key part of congressional recovery efforts.

Domestic workers were struggling even before the onset of the pandemic. Paid less and covered by fewer labor protections, they are three times as likely to live in poverty as other workers, according to the Economic Policy Institute. Less than 20 percent have access to basic health care.

Ai-Jen Poo, the director of the National Domestic Workers Alliance, a nonprofit organization working to raise labor standards for the workforce, said the organization found in January that 40 percent of domestic workers didn’t have jobs. A third of those who did work earned less than $10 an hour, she said.

“The numbers speak for themselves, but behind every number is a person who is probably a primary income earner for their family, probably a mother of young children, and a life that is struggling in, literally, like, a nightmare of impossible choices for themselves and their families,” Poo said.

Domestic worker organizations like hers have continued to organize and raise awareness for the past year, and their work appears to be bearing fruit.

“That bill of rights would bring domestic workers into all existing workplace protections that every other worker in Virginia has access to when it comes to workplace discrimination, harassment, being protected and safe at the job, making sure that you have access to compensation if you’re injured at work, and making sure that the state has the responsibility and the authority to set safety standards for what a safe workplace looks like for domestic workers,” said Alexsis Rodgers, the Virginia state director for the National Domestic Workers Alliance.

As a new administration in the White House emphasizes equity, domestic workers, who are often left in the shadows, also feel hopeful that a new round of Covid-19 relief could reach them.

“I would say the shift is that people feel seen,” said Mary Kay Henry, international president of the Service Employees International Union. “Those gaps have not been closed, but we feel like we’re working together with the highest level of government to close the gaps in every community.”

But, Rodgers said, there are still challenges to getting relief to undocumented domestic workers.

Lenka Mendoza, 43, a domestic worker advocate in Virginia, has spent nearly two decades cleaning homes and hotels, and well as working as a nanny. She said in a phone interview that she has seen firsthand how undocumented workers were left on their own.

Mendoza, who speaks Spanish, recalled through a translator how she and other advocates helped colleagues who had been laid off and became homeless. She said getting the bill passed in Virginia is the top priority, along with making sure Congress follows through.

“Now we’re giving our sisters and brothers a more dignified work environment that’s respected and better paid,” she said through her translator. “And before that, there was nothing to protect them from discrimination, from mistreatment in the workforce from getting not getting paid or low pay.”

Dartunorro Clark is a political reporter for NBC News.