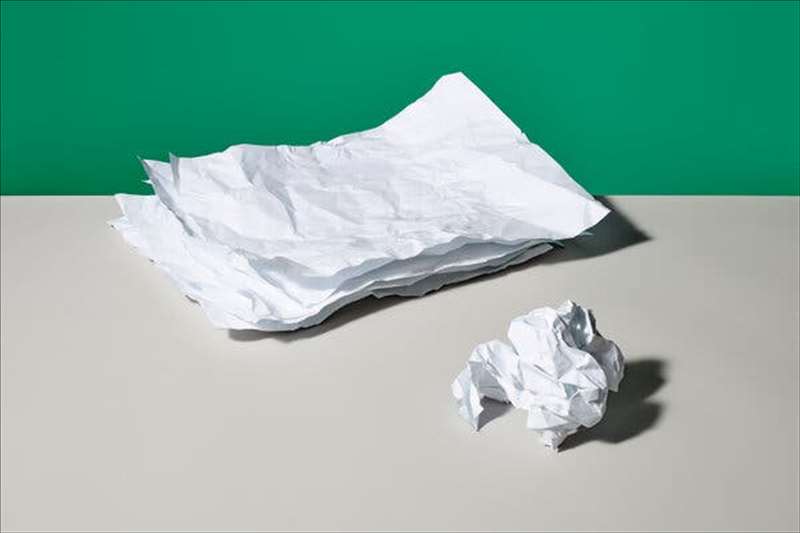 From studies of “geometric frustration,” scientists learn how paper folds under pressure.

A piece of crumpled paper, in all of its creased fragmentations, suffers from “geometric frustration.” Who among us can’t sympathize?

“The sheet is stressed, so something needs to happen to relieve that stress,” Ms. Andrejević said. She was speaking from her childhood home outside Chicago, where she is living temporarily with her parents and her twin sister, Nina, who is pursuing a Ph.D. in materials science at the Massachusetts Institute of Technology. “The formation of a crease is how the stress is relieved,” Ms. Andrejević said. “The role of the creases is effectively to protect as much of the sheet as possible from further damage.”

Crumpled paper is a proxy for much more than our pandemic angst. Similar dynamics are at play, for instance, in the wrinkling of graphene sheets for high-performance batteries; the flexibility of wearable electronic devices and artificial skin, and the folding of Earth’s crust.

The 2018 study showed that the cumulative total length of all creases — the “mileage” — on a crumpled sheet served as a predictor of how the sheet would behave when crumpled again and again.

Although the researchers crumpled a sheet as many as 70 times, after a few cycles it was difficult to see any difference, from one crumple to the next. But by tracking and analyzing the mileage, they noticed that a sheet never stopped forming creases, although it did so at a logarithmic rate, adding fewer creases with each recrumpling.

Perhaps the most unexpected aspect of the original finding was the element of “universality,” according to Chris Rycroft, an applied mathematician and principal investigator on both papers. Two separate sheets, crumpled the same way, develop visually distinct crease patterns but rack up comparable overall mileage. “It’s very surprising the mileage is largely independent of the crease pattern,” he said.

But what was why — the physics — behind this property? “At the time, everyone was mystified by this finding,” Dr. Rycroft said. The new study “solves this conundrum and explains why.”

Revisiting data from the 2018 crumpling experiments, the team initially tried to tease out more information from the creases. Did creases tend to align with one another? Was there a correlation between the orientation of creases and the direction along which a sheet was crumpled? This line of investigation didn’t yield much insight.

Instead, they focused on the facets — the areas outlined by the creases. This approach seemed unlikely to succeed; it was simply too hard. Creases can be messy and irregular, making the contours they define tricky to isolate and identify. In turn, the noisy data made it particularly difficult for automated methods to accurately catalog the facets.

Ms. Andrejević solved this problem, Dr. Rycroft said, “in spectacular style, by tracing the facets all out by hand.” Shmuel Rubinstein, also a principal investigator, now based at the Hebrew University of Jerusalem, said it was “a herculean effort, really, requiring a ton of work, and a ton of conviction.”

On average, the sheets of elastoplastic Mylar (about four-by-four inches square) possessed 880 facets; one specimen contained 3,810. As children in Serbia, Ms. Andrejević and her sister loved drawing. These days, their artistic focus is communicating science through graphic design and data visualization. (They are very close, and often discuss ideas with each other.) Ms. Andrejević used some of her drawing tools — not paper and colored pencils, but her tablet, Adobe Illustrator and Photoshop — to wrangle the contours of the creases. She hand-traced crease patterns for 24 scanned sheets, 21,110 facets in total.

By the end, she felt as if she were seeing fragmentation everywhere, and in the most unexpected places — walking home from the lab one day, she saw a resemblance in a tiling pattern decorating a trash can.

In the summer of 2019, Ms. Andrejević and Dr. Rycroft developed the facet analysis into a theory while visiting the Lawrence Berkeley National Laboratory in Berkeley, Calif., where Dr. Rycroft holds a visiting position. During hikes on the weekend, they found inspiration in the natural world, looking at eroding rockslides and pebbled beaches.

Around the same time Ms. Andrejević delved into the scientific literature on fragmentation theory, which explores the physical principles explaining how materials (rock, glass, volcanic debris, meteorites) break into smaller and smaller pieces. The theory provides a way of characterizing the resulting fragments. For example, as fragmentation progresses, materials — regardless of their starting point — quickly tend toward a predictable “steady-state” distribution of fragment sizes.

Ms. Andrejević and her collaborators wondered whether the evolution of crumpling paper could be described by the same principles and statistical trends.

After hand-tracing the facets of the scanned sheets on her tablet, Ms. Andrejević colored each segment by area, and then sorted them by size. A familiar order-amid-disorder emerged. Comparing one sheet to the next, she noticed that, despite their differing crease patterns, the size distributions of facets were similar. Furthermore, the size distribution of facets fit perfectly with the predictions of fragmentation theory.

This provided a theoretical underpinning for the behavior seen in the experimental study from 2018. “We were very excited about this result because it supports the idea that there is some universality across diverse disordered systems,” Ms. Andrejević said.

To confirm these findings, the team did some verification experiments. Lisa Lee, then a Ph.D. student, started with a fresh sheet of paper and folded it into a five-by-five grid of square facets, all of equal area; compared with a typical crumpling in the experiment, this produced a very different size distribution of facets.

Dr. Lee then opened the folded sheet and subjected it to the usual regimen of crumpling, recrumpling and recrumpling some more. “Even after just a single crumple, the facets closely resembled the distribution predicted by our model,” said Dr. Lee, who is now doing research and development at ThermoFisher Scientific. The facets quickly fell in line with the classic fragmentation distribution, and thereafter followed the same universal evolution.

This shows how, in a fragmentation process, any special pattern of fragment sizes is rapidly washed out — vanishing after a single crumple, in the case of the grid folding. Technically speaking, this means the steady-state distribution of sizes is a “strong attractor,” a state toward which a system tends to evolve.

This further explained why the overall “mileage” would exhibit universal behavior and predict the evolution of the crease network.

However, one piece of the puzzle was still missing: an explanation of the physical dynamics.

“We found our answer by incorporating some geometry,” Ms. Andrejević said. Given a sheet’s crease pattern after, say, nine crumples, and given the geometry of its confinement when crumpled again, the researchers could predict how much new damage would occur during the 10th crumple — that is, what the sheet would look like after enduring yet another round of “geometric frustration.”

By the end of their summer research, in July, Ms. Andrejević and Dr. Rycroft sent their theory — in a document named “crumpling_math_model” — to Dr. Rubinstein. “I was blown away,” Dr. Rubinstein recalled.

In fact, they were all surprised that fragmentation theory proved so effective. “To the best of our knowledge this is the first application of such concepts to describe crumpling,” the authors wrote in their paper.

Yet for Dr. Rubinstein and the team, fragmentation is only part of the answer. Still to be revealed are the rules of crumpling.

Ms. Andrejević is refining a computer simulation that will help, the researchers hope, in finally figuring out the crumpling problem — in part by generating data that is otherwise cumbersome to acquire with crumpling and recrumpling experiments in the lab.

“The idea was that if the A.I. could predict one from the other, this will mean that there are geometrical rules (and not only statistical) to the formation of the crease network, like in Japanese origami,” Dr. Rubinstein noted. The main result showed that the computer, if given some rules of folding origami, does much better at “learning” crumpling.

“We learned a lot from that study, but I can’t honestly say we learned the rules of crumpling,” Dr. Rubinstein said. “We believe that with reliable numerical simulations we will be able to go much farther.”

For instance, the curious, constant crumpler asks: Which areas of a repeatedly crumpled sheet are most likely to get new creases and which areas are “safe”? Which part of the sheet will be in the center of the crumpled ball, and which part will be more toward the edges?

Crumpling belongs to the family of “compaction” questions, which probe, for instance, how viral RNA is packed in a protein capsid. And understanding how and why materials fail is vital, whether those materials are new metallic alloys or the thin-walled structures of cars and silos.

Dr. Rycroft’s group studies bulk metallic glasses, or B.M.G.s — materials composed of atoms with a structure that is random and amorphous rather than orderly and crystalline. The disorder lends itself to high-strength and wear-resistant properties, which could benefit a wide range of applications, from smartphone cases to aircraft components.

B.M.G.s, however, are known to sometimes fail. “They can develop networks of thin shear bands that are precursors to outright failure,” Dr. Rycroft said. The failure properties are complex and not well understood, which limits practical use, he noted.

But the patterns formed by shear bands are reminiscent of crease network patterns. This led the researchers to speculate whether their crumpling fragmentation model might apply — and help in designing to avoid failure. Who among us can’t sympathize?