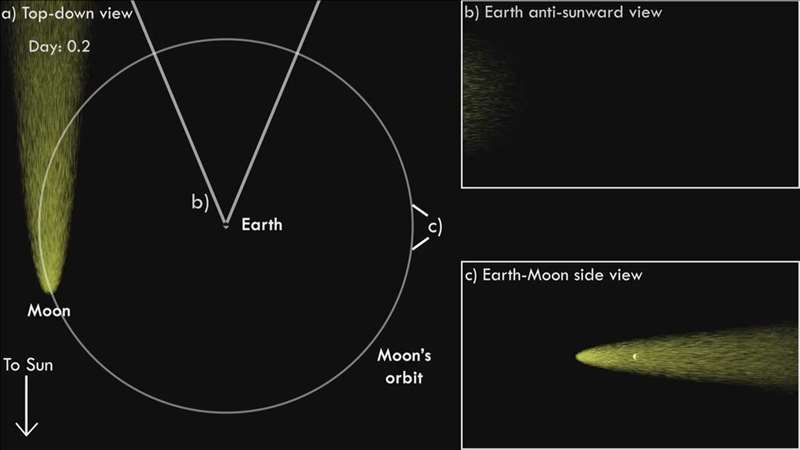 “It almost seems like a magical thing,” said one of the astronomers involved in studying the lunar phenomenon.

The moon, lacking an atmosphere to shield it, is constantly under attack. When meteorites bombard its volcanic surface, sodium atoms fly high into orbit. The sun’s photons collide with the sodium atoms, effectively pushing them away from the sun and creating a tail-like structure flowing downstream from the moon.

For a few days each month, when the new moon moves between Earth and the sun, this comet-like tail dusts the side of our world that is facing the sun. Our planet’s gravity pinches that sodium stream, narrowing it into a beam, invisible to the naked eye, that wraps around Earth’s atmosphere and shoots out into space from the opposite side of the planet.

“Does this have a practical application? Probably not,” Mr. Baumgardner, the study’s lead author, said. This research was driven by nothing more than curiosity, he said, a desire to simply learn more about that beautiful volcanic pearl in the sky and its mystifying moonbeam.

“I think it’s very cool,” said Sarah Luettgen, an undergraduate at Boston University and a co-author of the study. “It almost seems like a magical thing.”

But the all-sky-imager camera situated in the El Leoncito Observatory in Argentina, which took 21,000 images of the moon from 2006 to 2019, tells a slightly different story.

Annual meteor showers — like the Leonids, one of the most intense — can coincide with a brighter moon spot. But this isn’t always the case, perhaps because their impacts are not always energetic enough to jettison lunar sodium far away enough from the moon so that it can contribute to the comet-like tail and its moon spot.

But even invisible, knowing that Earth has a meteor-fueled moonbeam is satisfying enough — a reminder of the moon’s dynamism.

“I think we definitely take it for granted,” Dr. O’Donoghue said.