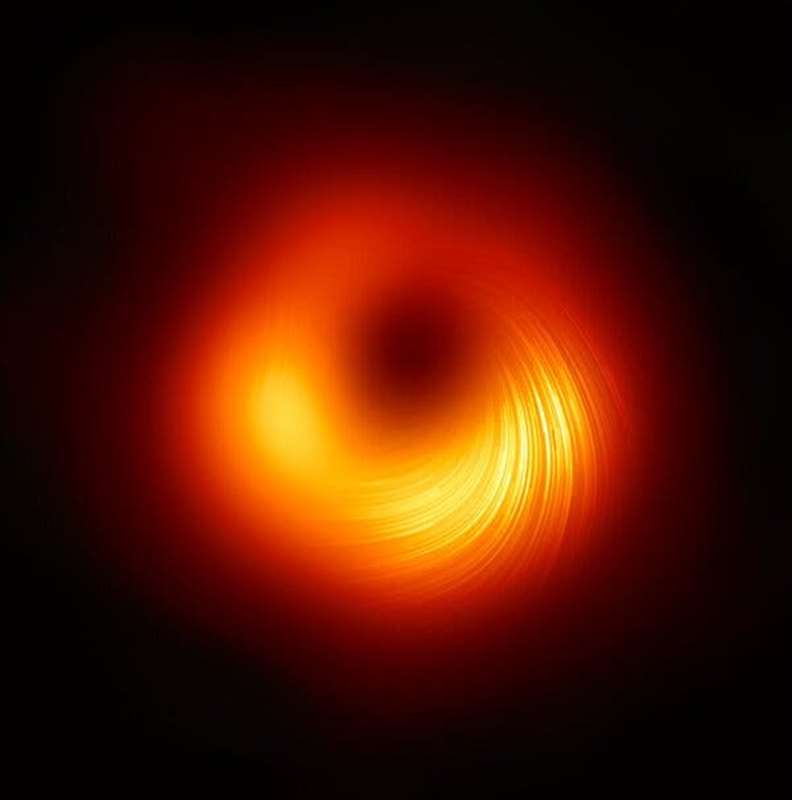 Two years of analyzing the polarized light from a galaxy’s giant black hole has given scientists a glimpse at how quasars might arise.

The Event Horizon Telescope collaboration, an international team of radio astronomers that has been staring down the throat of a giant black hole for years, on Wednesday published what it called the most intimate portrait yet of the forces that give rise to quasars, the luminous fountains of energy that can reach across interstellar and intergalactic space and disrupt the growth of distant galaxies.

The black hole in question is a monster 6.5 billion times as massive as the sun, and lies in the center of an enormous elliptical galaxy, Messier 87, about 55 million light-years away in the constellation Virgo. Two years ago, the team photographed it, producing the first-ever image of a black hole; the hitherto invisible entity, a porthole to eternity. It looked like a fuzzy smoke ring, much as Albert Einstein’s equations had predicted a century ago.

The group has spent the last two years extracting more data from their observations about the polarization of the radio waves, which can reveal the shape of the magnetic fields in the hot gas swirling around the hole.

Now, seen through the radio equivalent of polarized sunglasses, the M87 black hole appears as a finely whiskered vortex, like the spinning fan blades of a jet engine, pumping matter into the black hole and energy outward into space.

“It’s like putting on a pair of polarized sunglasses on a bright sunny day — all of a sudden you can see what’s going on,” said Sheperd Doeleman, an astronomer at the Harvard-Smithsonian Center for Astrophysics and the founding director of the collaboration.

“Now we can actually see the patterns of these fields in M87 and begin to study how the black hole is funneling material to its center,” he said.

Daniel Holz, an astrophysicist at the University of Chicago who was not part of the research, said: “These relativistic jets are some of the most extreme phenomena in nature, combining gravity and hot gas and magnetic fields to produce a beam which crosses an entire galaxy. It is exciting that E.H.T. is helping us learn more about what is going on at the heart of these relativistic jets which originate very near the ‘surface’ of a black hole.”

Janna Levin, an astrophysicist at Barnard College of Columbia University who studies black holes but was not part of the Event Horizon team, called the results “thrilling,” as they revealed details about how a black hole can create “a lethal, powerful, astronomical ray gun that extends thousands of light-years.”

Black holes are bottomless pits in space-time, where gravity is so powerful that not even light can escape; whatever enters essentially disappears from the universe. The cosmos is littered with black holes. Many are dead stars that have collapsed in catastrophically on themselves. One sits at the center of almost every galaxy, and is millions or billions of times as massive as any star.

Paradoxically, despite their light-swallowing capability, black holes are the most luminous objects in the universe. Material — gas, dust, shredded stars — that falls into a black hole is heated to millions of degrees as it swirls around the drain of doom in a dense maelstrom of electromagnetic fields. Most of that matter falls into the black hole, but some is pushed out, like toothpaste, by enormous pressures and magnetic fields. How all of this energy arises and is marshaled remains unknown to astronomers.

Such fireworks, which can outshine galaxies a thousandfold, can be seen across the universe; when first observed in the early 1960s, they were called quasars. That discovery led physicists and astronomers to first take seriously the notion that black holes exist.

The telescope is named after the point of no return around a black hole; beyond the event horizon, all light and matter is consumed. In April 2017, when the telescope spent 10 days observing M87, it consisted of a network of eight radio observatories around the globe — “a telescope as big as the world,” as Dr. Doeleman likes to say, able to spot details as small as an orange on the moon. The team then took two years to process the data. The results came together in April 2019, when Dr. Doeleman and his colleagues presented the first-ever images — radio maps, really — of a black hole, the monster in M87.

“We have seen what we thought was unseeable,” Dr. Doeleman said at the time. The picture appeared on the front page of newspapers around the world, and a copy is now in the permanent collection of the Museum of Modern Art in New York.

But that was only the beginning of the journey inward.

It took another two years for researchers to produce the polarized images released on Wednesday.

Jets and lobes of radio, X-ray and other forms of energy extend more than 100,000 light-years from the black hole in M87. Much of this radiation comes from energetic electrical particles spiraling around in magnetic fields.

The newly processed image allows the astronomers to trace these fields back to their origins, in a hot, chaotic ring of electrified gas, or plasma, about 30 billion miles across — four times as wide as the orbit of Pluto. That achievement is made possible because the light from the disk is partly polarized, vibrating more in one direction than in others.

“The direction and intensity of the polarization in the image tells us about the magnetic fields near the event horizon of the black hole,” said Andrew Chael, an astrophysicist at Princeton University who is part of the Event Horizon team.

Astronomers have debated for years whether the magnetic fields surrounding so-called low-luminosity black holes like M87 were weak and turbulent or “strong” and coherent. In this case, Dr. Chael said, the magnetic fields are strong enough to disrupt the fall of the gas and transfer energy from the spinning black hole to the jet.

“The E.H.T. images also provide hints that the bright jet in M87 is actually powered from the rotational energy of the black hole, which twists the magnetic fields as it rotates,” said Michael Johnson another Event Horizon member from the Harvard-Smithsonian Center for Astrophysics.

As a result, Dr. Doeleman said, “This gives the emitted radio waves the azimuthal twist” observed in the curving pattern of the new, polarized images. He noted that azimuthal twist would be a “fine name for a cocktail.”

A byproduct of the work, Dr. Doeleman said, was that the astronomers were able to estimate the rate at which the black hole is feeding on its environment. Apparently it isn’t terribly hungry; the black hole is eating “a paltry” one-thousandth of the mass of the sun per year.

“Yet it’s enough to launch powerful jets that stretch for thousands of light years, and it’s radiant enough for us to capture it with the E.H.T.,” he said.

Dr. Doeleman is already laying the groundwork for what he calls the “next generation” Event Horizon Telescope, which will produce movies of this magnetic propulsion structure in action.

“This is really the next big question,” Dr. Doeleman said. “How do magnetic fields extract energy from a spinning black hole? We know it happens, but we don’t know how it works. To solve that, we will need to create the first black hole cinema.”