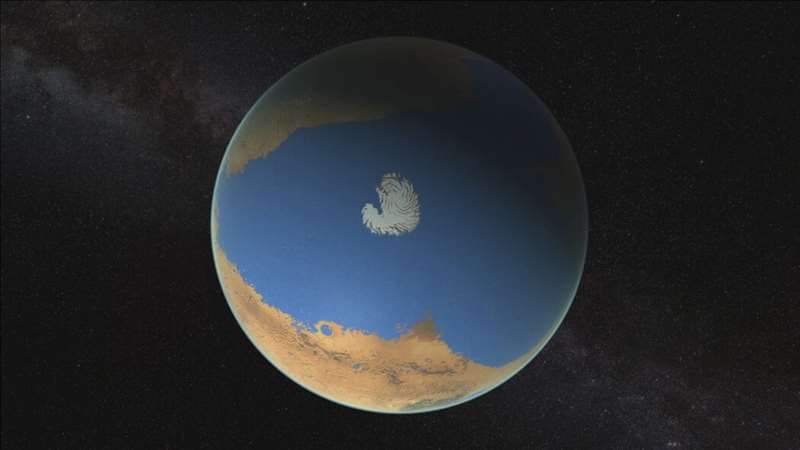 Mars once had rivers, lakes and seas. Although the planet is now desert dry, scientists say most of the water is still there, just locked up in rocks.

Mars was once wet, with an ocean’s worth of water on its surface.

Today, most of Mars is as dry as a desert except for ice deposits in its polar regions. Where did the rest of the water go?

Some of it disappeared into space. Water molecules, pummeled by particles of solar wind, broke apart into hydrogen and oxygen atoms, and those, especially the lighter hydrogen atoms, sped out of the atmosphere, lost to outer space.

Data from the past two decades of robotic missions to Mars, including NASA’s Curiosity rover and the Mars Reconnaissance Orbiter, showed a wide distribution of what geologists call hydrated minerals.

“It became very, very clear that it was common and not rare to find evidence of water alteration,” said Bethany L. Ehlmann, a professor of planetary science at the California Institute of Technology and one of the authors of the paper.

Dr. Ehlmann, speaking at a news briefing Tuesday at the Lunar and Planetary Science conference, said that as the rocks are altered by liquid water, water molecules become incorporated into minerals like clays. “Water is effectively trapped into the crust,” she said.

To get a sense of the amount of water, planetary scientists talk about a “global equivalent layer” — that is, if Mars were smoothed out into a uniform, featureless ball, how deep would the water have been?

The most likely depth was about 2,000 feet, they said, or roughly one-fourth as much water as is in the Atlantic Ocean.

The data and simulations also indicated that the water was almost all gone by three billion years ago, around the time on Earth when life consisted of single-cell microbes in the oceans.

“This means that Mars has been dry for quite a long time,” said Eva Scheller, a Caltech graduate student who was the lead author of the Science paper.

Today, there is still water equivalent to a global ocean 65 to 130 feet deep, but that is mostly frozen in the polar ice caps.

Without a time machine, there is no way to observe directly how much water was on a younger Mars more than three billion years ago. But the hydrogen atoms floating today in the atmosphere of Mars preserve a ghostly hint of the ancient ocean.

On Earth, about one in 5,000 hydrogen atoms is a version known as deuterium that is twice as heavy because its nucleus contains both a neutron and a proton. (The nucleus of a common-variety hydrogen atom has only a proton, no neutrons.)

The problem with that story, said Renyu Hu, a scientist at NASA’s Jet Propulsion Laboratory and another author of the current Science paper, is that Mars has not been losing hydrogen fast enough. Measurements by NASA’s Mars Atmosphere and Volatile Evolution orbiter, or MAVEN, have showed that the current rate, extrapolated over four billion years, “can only account for a small fraction of the water loss,” Dr. Hu said. “This is not enough to explain the great drying of Mars.”

That led to the new research concluding that a great majority of water went into the rocks.

“This is a very interesting new study in which many processes are combined to provide alternative scenarios for the fate of water on Mars,” Geronimo Villanueva, one of the NASA scientists who performed the earlier deuterium measurements, wrote in an email. “This opens the possibility for an even wetter past, and that rocks on Mars now hold more water than we initially thought.”

The water, however, probably would not be of much use to settlers from Earth. “The amount of water that’s in a rock is very small,” Ms. Scheller said.

To release water trapped in minerals requires heating them to high temperatures. “We would have to sort of cook a very large amount of rock to have anything that would be helpful,” Ms. Scheller said.

Michael A. Meyer, the lead scientist for NASA’s Mars exploration program, said, “I’ll just mention that nuking a planet is usually not a good way to make it more habitable.”

On Earth, water is also absorbed in rocks, but it does not stay there indefinitely. The movement of Earth’s crust pushes rocks down into the mantle, where they melt, and then the molten rock — and water — comes back up through volcanoes. On Mars, volcanism, like liquid water, appears to have gone away long ago.