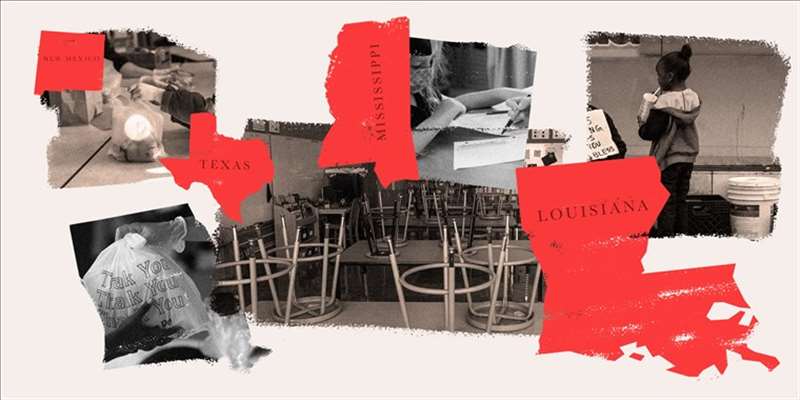 The coronavirus pandemic has disrupted childhood in every state, with particularly devastating consequences in the South, where families are most likely to run low on food and struggle with bills and access to online schooling, according to a new report.

“Kids and families are suffering all across this country, but there are some communities, and some states, better equipped to navigate through it,” said Shane Garver, senior director of rural education for Save the Children.

To compile the rankings, researchers with the organization analyzed data from Aug. 19 to Dec. 21 from the Census Bureau’s biweekly Household Pulse Survey, which asks participants about their lives during the pandemic, ranging from their employment status to their views on the Covid-19 vaccine. Save the Children’s findings center on food insecurity, internet access for schoolwork and difficulty in paying for basic household expenses.

The disparities are not limited to geography. Forty-one percent of parents making less than $25,000 per year reported not having enough to eat. The report found that children of color were particularly vulnerable to hunger. Nearly 30 percent of Black households and 1 in 4 Hispanic families said they sometimes or often didn’t have enough food to eat, according to the report. That’s nearly twice the figure for white families.

The gulf carries over to education. Tens of thousands of children have not stepped inside of a classroom since last April. Black and Hispanic students are more likely to still be learning remotely. They’re also more likely to have a harder time accessing devices and reliable internet needed for online instruction. Louisiana had the lowest mark last December for the percentage of families able to access online learning, with only 1 in 4 saying they had what they needed to regularly log on.

When schools shut down last spring, Chriscella Metoyer, Save the Children’s Head Start program director for northwest Louisiana, said that at least 60 percent of families served through the program lacked internet, or a device to keep up with their child’s lessons online.

Head Start centers were eventually able to provide tablets to families, but she worries about the struggles her staff can’t account for. Several child care centers in the region have closed, and some families have had a hard time participating in preschool lessons from home.

The hardships have touched Metoyer’s family. Her 22-year-old daughter, Amberlyn, who lives in Natchitoches, was left without work when the day care she worked at shut down for two months. As a single mother with a 4-year-old son, she turned to family for help. When the center reopened, several parents never sent back their children, leaving her with fewer hours. By then, she had learned she was pregnant and decided to stay at home to limit her chances of contracting the virus.

Amberlyn says food assistance and support from her family helped, but she couldn’t always keep up with bills. Then, in mid-September, about a month before she gave birth, she lost her home in an electrical fire.

She’s slowly started over and plans to graduate from college in May, but she worries about Covid-19 numbers going back up and derailing her stability again as she cares for her son and 4-month-old daughter.

“I would feel like I’m back at square one,” she said.

The factors determining many families’ ability to get by were set in motion long before the first case of the coronavirus reached the U.S.

“Before the pandemic, 90 percent of the counties in the U.S. with the highest rates of food insecurity were rural to start with,” Garver said. “So, these were some of the kids, families and communities least prepared. There was the least local investment and local infrastructure to weather a pandemic like this.”

Prior to the pandemic, childhood poverty rates in Louisiana, Mississippi and New Mexico were among the nation’s worst, further fueling hardships families are experiencing now. And it’s not just rural areas — the economic crisis has also hit larger cities across the South.

These circumstances portend a longer road to recovery for communities like Shreveport, Louisiana.

More than 25 percent of residents in the majority-Black city live in poverty.

Omari Ho-Sang, founder of All Streets, All People, a grassroots organization helping to coordinate relief efforts for families in Shreveport during the pandemic, said that the upheaval is the latest in a long list of setbacks, including generational poverty and poor quality of education, that the group has tried to combat.

“We’re hearing stories about folks who are losing their jobs and who are completely dependent on those stimulus checks,” she said. Others don’t have access to bank accounts or move frequently, resulting in checks being mailed to old addresses.

It’s been a tough year to catch a break. A winter storm last month left many in the city without running water. All Streets, All People has distributed bottled water, but it’s not enough to reach everyone. The added expense of purchasing water that’s safe enough to drink is one more hardship.

“This pandemic has lasted about a year for us,” Ho-Sang said, “but I think the impact will be 10 years long for children.”

Bracey Harris is a national reporter for NBC News, based in Jackson, Mississippi.