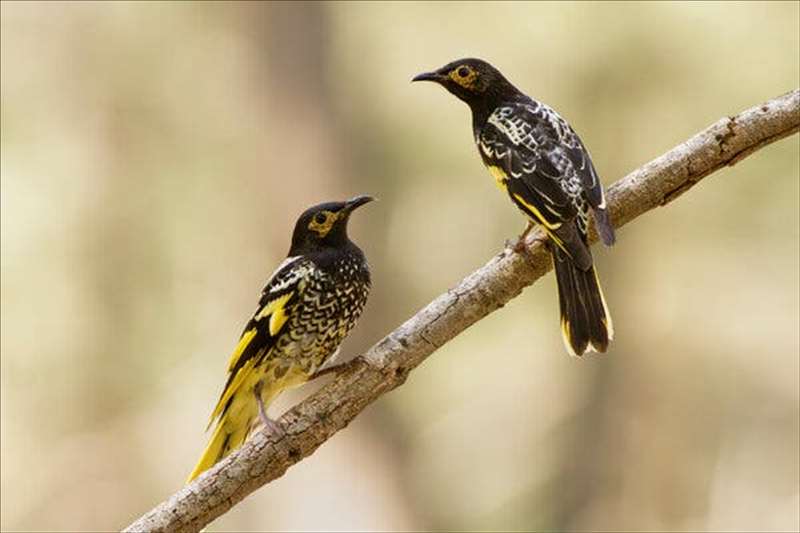 New generations of a critically endangered species of songbird are failing to learn the tunes they need for courtship. It could lead to extinction.

A male regent honeyeater in Australia. Researchers say a decline in singing culture could drive the species to extinction.

Humans who sing karaoke know the feeling. So do birds, apparently, and it’s a big problem for one avian species in Australia.

As the population of the critically endangered regent honeyeater plummeted over the years, some young birds could no longer find older ones to teach them to sing, a new study reports. As a result, the birds have failed to learn the songs they need for courtship and other evolutionary business.

They try to compensate by mimicking songs from other types of birds. But because female regent honeyeaters aren’t easily moved by unfamiliar melodies, the courtship ritual is doomed to fail.

“We find that some males, if they’re not paired, just spend all their day singing, looking for a mate,” said Ross Crates, the paper’s lead author and a postdoctoral fellow at the Australian National University in Canberra.

A failed tryst or two wouldn’t be a reproductive problem for a healthy population. But for a species with an estimated 200 to 400 members spread across an area of southeastern Australia that is larger than the United Kingdom, the loss of singing culture may be what the researchers called a “precursor to extinction.”

The researchers found that 12 percent of male regent honeyeaters in the study failed to learn any songs specific to their own species. Straying from the “regional cultural norm” was associated with reduced reproductive success, and learning to sing other birds’ tunes did not help.

“It’s an exquisite piece of work that tells a terrible story,” David Watson, a professor of ecology at Charles Sturt University in Australia who was not involved in the research, said of the new study.

“It is carefully conducted science, reasonable and evidence-based inferences that, in a few short pages, describe what the extinction of a species sounds like,” Professor Watson said in an email. “It doesn’t happen with a bang but with a slow drawn-out whimper.”

“This study adds to a growing understanding that in many animals, like humans, the loss of cultural identity can have far-ranging effects on their ability to persist,” she added.

Regent honeyeaters are a social species that once traveled in large flocks, feeding in flowering eucalyptus and mistletoe trees across an area in Australia from roughly Melbourne to Brisbane. They sing to each other not only for mating, but to mark territory and relay tips on where to find food.

But as temperate woodlands across Australia were cleared in recent decades, the population fell — from about 1,500 birds in the late 1980s to about a fifth that many more than two decades later, according to government data. The species also began to lose turf battles with competitors like the noisy miner, a fellow honeyeater known for its aggressive behavior.

A century ago, “there were lots of regent honeyeaters to stand up to the noisy miners,” said Mick Roderick, a program manager at the advocacy group Birdlife Australia. “But now, because there’s literally just a pair here and a pair here — they are so rare — they’re just sitting ducks.”

A male regent honeyeater typically makes a “warbly noise” similar to that of a small turkey, and claps its beak while it sings, Mr. Crates said. But when young males can’t find mentors to learn from, they try to mimic the songs of other species instead, including one that sounds “metallic” and another that recalls a repetitive whistle.

Mr. Crates said a useful human analogy would be the Indigenous societies in Australia and the United States whose languages have been lost after populations grew too sparse to sustain them.

“It’s nice to be able to speak two languages,” he said, “but if it comes at the expense of speaking your first language and you can’t associate with your friends and family — or anyone you kind of want to maybe date — it comes at a cost.”