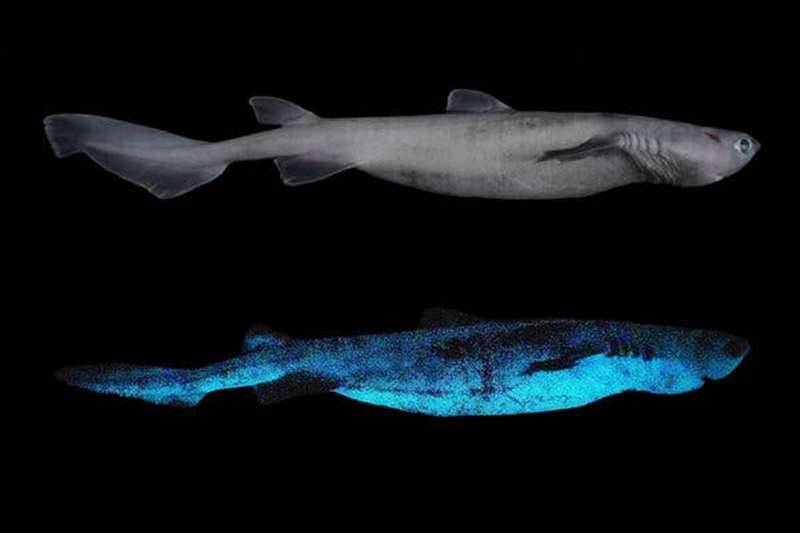 As they prowl the oceans, sharks aren’t just hunting. Some of them are glowing. And now researchers have identified the largest glow-in-the-dark species with a spine — on land or sea — that has ever been found.

The study was led by Jérôme Mallefet at the Catholic University of Louvain in Belgium, a scientist who has built his career studying bioluminescent marine life. His recent collaboration with researchers there and at the National Institute of Water and Atmospheric Research in Wellington, New Zealand, piggybacked on an annual survey conducted off the New Zealand coast. That project trawled depths as far down as 2,600 feet to document numbers of hoki, a white-fleshed fish that supports New Zealand’s largest commercial fishery.

As the survey netted fish, Dr. Mallefet and colleagues would scan the catch for sharks, which were able to survive the drastic pressure change because of their lack of swim bladders. Live sharks were transferred to tanks in a dark, cold room where the team photographed them, including the kitefin shark’s spectacular luminosity. Once photographed alive, specimens of the three shark species were euthanized, with samples of skin dissected, allowing the researchers to examine their flashlight-like luminous organs.

Tiny lantern sharks were already known to be luminous tricksters. Blue-green bioluminescent organs on their belly help them blend in with bluish light from above, so they can avoid detection by larger predators while possibly illuminating shrimp and squid on the sea floor — their dinner table. A glowing undercarriage also advertises reproductive organs to mates. As multipurpose masters, Dr. Mallefet calls lantern sharks MacGyvers of light.

He had previously discovered that the organs that produce light in sharks are not controlled by their nervous systems, in contrast with many other bioluminescent organisms. Instead, chemical tests showed that shark light is regulated by the hormone melatonin.

“It makes us fall asleep,” Dr. Mallefet said, “but it’s lighting up the shark.”

Testing melatonin and other hormones on lantern shark and kitefin shark skin samples during the survey, his team confirmed that melatonin activates their bioluminescence, while other hormones turn it off, though yet more untested hormones may also contribute. What triggers the action and control of these hormones has yet to be deciphered.

Bioluminescence is a biochemical reaction that relies on luciferin — a family of light-producing proteins — interacting with the enzyme luciferase, she explained, though precise recipes for lighting up differ among organisms. “Nature as a tinkerer has found these different solutions to produce light,” Ms. Lau said.

Although she called the new research exciting, she noted that the underlying biochemistry of the shark’s hormonal on-off switch remains unknown.

Dr. Mallefet acknowledges these lingering mysteries, too. And while gratified to have photographed the largest-known glowing shark, he hopes to illuminate more enigmas in the ocean.

“Down there, there are glowing critters of different sizes, perhaps even larger than kitefin sharks, that we still know nothing about,” he said, adding that with resource exploitation of the deep sea becoming increasingly widespread, it’s time to study this ecosystem before we destroy it.