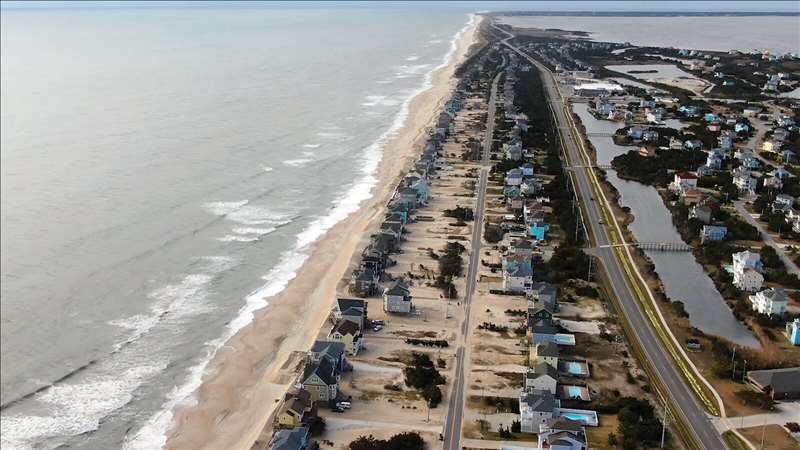 On the Outer Banks, homeowners in Avon are confronting a tax increase of almost 50 percent to protect their homes, the only road into town, and perhaps the community’s very existence.

AVON, N.C. — Bobby Outten, a county manager in the Outer Banks, delivered two pieces of bad news at a recent public meeting. Avon, a town with a few hundred full-time residents, desperately needed at least $11 million to stop its main road from washing away. And to help pay for it, Dare County wanted to increase Avon’s property taxes, in some cases by almost 50 percent.

Homeowners mostly agreed on the urgency of the first part. They were considerably less keen on the second.

People gave Mr. Outten their own ideas about who should pay to protect their town: the federal government. The state government. The rest of the county. Tourists. People who rent to tourists. The view for many seemed to be, anyone but them.

Mr. Outten kept responding with the same message: There’s nobody coming to the rescue. We have only ourselves.

The risk to tiny Avon from climate change is particularly dire — it is, after all, located on a mere sandbar of an island chain, in a relentlessly rising Atlantic. But people in the town are facing a question that is starting to echo along the American coastline as seas rise and storms intensify. What price can be put on saving a town, a neighborhood, a home where generations have built their lives?

Along the Outer Banks — where tourist-friendly beaches are shrinking by more than 14 feet a year in some places, according to the North Carolina Division of Coastal Management — other towns have imposed tax increases similar to the one Avon is considering. On Monday, county officials will vote on whether or not Avon will join them.

This despite the reality that Avon’s battle is most likely a losing one. At its highest point, the town is just a couple dozen feet above sea level, but most houses, as well as the main road, are along the beachfront.

“Based on the science that I’ve seen for sea-level rise, at some point, the Outer Banks — the way they are today — are not forever,” said David Hallac, superintendent of the national parks in eastern North Carolina, including the Cape Hatteras National Seashore, which encompasses the land around Avon. “Exactly when that happens is not clear.”

The Outer Banks have a rich past. Hatteras Island, originally home to members of the Algonquin tribe, is near the site of the so-called lost colony of Roanoke. A few miles north and several centuries later, the Wright brothers flew their first airplane.

And it is the vulnerability to the sea — the very threat Avon is wrestling with today — that, in a twist of fate, helped transform the Outer Banks into a tourist spot, according to Larry Tise, a former director of North Carolina’s Division of Archives and History.

In 1899 a terrible hurricane all but destroyed the islands, and the state decided not to spend money developing them. Land speculators later swooped in, snapping up property and marketing the curious local history to attract tourists.

Today, tourism dominates Avon, a hamlet of T-shirt shops and cedar-shake mansions on stilts lining the oceanfront. A few blocks inland sits a cluster of modest older houses, called the Village, shaded by live oaks, Eastern red cedars and wax myrtles. This is where most of the remaining lifelong Avon residents live.

Audrey Farrow’s grandmother grew up in Avon and met Ms. Farrow’s grandfather when he moved to town as a fisherman in the late 1800s. Ms. Farrow, who is 74, lives on the same piece of land she, and her mother before her, grew up on.

Standing on her porch last week, Ms. Farrow talked about how Avon had changed in her lifetime. Vacationers and buyers of second homes have brought new money but have pushed out locals.

And the ocean itself has changed. The water is now closer, she said, and the flooding more constant. The wind alone now pushes water up the small road where she lives and into her lawn.

“If we’ve had rain with it, then you feel like you’ve got waterfront property,” she said.

From any angle, the reckoning for Avon seems to be drawing nearer.

So the county began using local money instead, splitting the cost between two sources: revenue from a tax on tourists, and a property tax surcharge on local homes. In 2011, Nags Head became the first town in the Outer Banks to get a new beach under that formula. Others followed, including Kitty Hawk in 2017.

Ben Cahoon, the mayor of Nags Head, said that paying $20 million to rebuild the beach every few years was cheaper than buying out all the beachfront homes that would otherwise fall into the sea.

He said he could imagine another two or three cycles of beach nourishment, buying his city 20 or 25 more years. After that, he said, it’s hard to guess what the future holds.

“Beach nourishment is a great solution, as long as you can afford it,” Mr. Cahoon said. “The alternative choices are pretty stark.”

Now the county says it’s Avon’s turn. Its beach is disappearing at a rate of more than six feet per year in some places.

During the meeting last month, Mr. Outten described Avon’s needs. As the beach disappears, even a minor storm sends ocean water across Highway 12. Eventually, a hurricane will push enough water over that road to tear it up, leaving the town inaccessible for weeks or more.

In response, the county wants to put about one million cubic yards of sand on the beach. The project would cost between $11 million and $14 million and, according to Mr. Outten, would need to be repeated about every five years.

That impermanence, combined with the high cost, has led some in Avon question whether beach nourishment is worth the money. They point to Buxton, the next town south of Avon, whose beach got new sand in 2018, paid for through higher taxes. Now, most of that sand has washed away, leaving a beachfront motel and vacation rentals teetering over the water.

“Every bit of it’s gone,” Michael David, who grew up in Avon and owns a garage in Buxton, said during last month’s meeting. “We’re just masking a problem that never gets fixed.”

Speaking after the meeting, Mr. Outten defended beach nourishment, despite its being temporary. “I don’t think we can stop erosion. I think we can only slow it down,” he said.

In interviews with more than a dozen homeowners in Avon, a frequent concern was how the county wants to divide the cost. People who own property along the beach will benefit the most, Mr. Outten said, because the extra sand will protect their homes from falling into the ocean. But he said everyone in town would benefit from saving the road.

Sam Eggleston, a retired optometrist who moved to Avon three years ago from outside Raleigh and bought a house on the western side of town, said even that smaller amount was too much. He said that because Highway 12 is owned by the state, the state should pay to protect it.

If the government wants to help, Mr. Eggleston argued, it should pay people to move their houses somewhere else — a solution he said would at least be permanent. “To keep spending millions and millions of dollars on the beach, to me doesn’t make sense,” he said.

That view was not shared by people who live on the beach.

When Carole and Bob Peterson bought a house on the ocean in 1997, it was protected from the water by two rows of huge dunes, Ms. Peterson said. Years of storms have washed away those dunes, leaving their 2,800-square-foot home exposed to the water.

Ms. Peterson acknowledged that she and her neighbors would benefit the most from rebuilding the beach. But the rest of the town should be willing to pay for it too, she said, because it protects the jobs and services they depend on.

“People that live over there, on that side, don’t understand that the beach is what keeps them alive,” she said, pointing across the road. “If you don’t have this beach, people aren’t going to come here.”

Audrey Farrow’s son, Matthew, a commercial fisherman, said he worried about the future of the place he grew up in. Between the flooding and the demand for vacation homes, which continues to drive up real estate prices, he said, it was getting harder to make a good life in Avon.