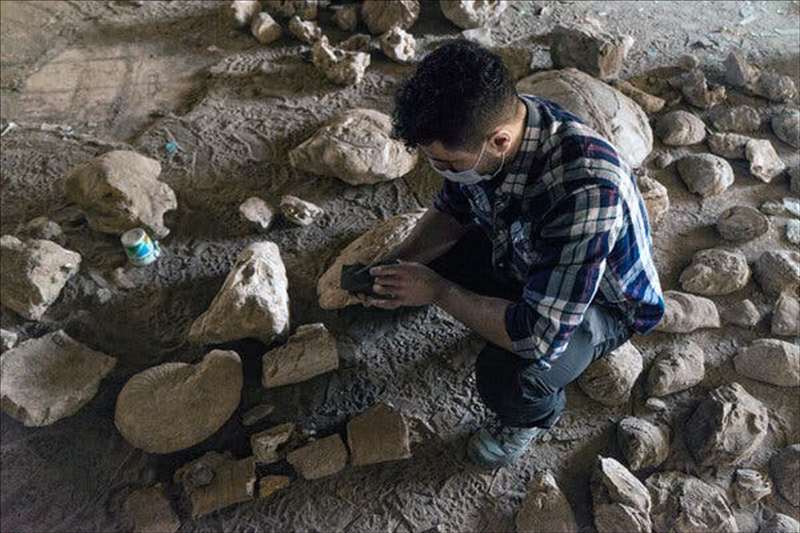 Younger paleontologists are working to overcome some historical legacies of their discipline and change how people learn about natural history.

In 2019, Mohamad Bazzi, a doctoral student at Uppsala University in Sweden, launched an expedition to Tunisia in search of fossils. He and his colleagues traveled to the phosphate mines around the city of Gafsa, where 56 million-year-old rocks record a time of rapidly warming oceans and mass extinctions, particularly of apex predators like sharks.

Mr. Bazzi made some distinctive choices for this paleontological expedition.

For starters, his team hired Tunisians to help dig, rather than bringing students from his university. Mr. Bazzi and his colleagues also chose to reach out to the residents of Gafsa wherever possible, holding impromptu lectures on the area’s fossil history to interested onlookers. This was a contrast with the secretiveness of many paleontologists in the field, who might worry about their sites being raided for the fossil black market.

The fossils the team collected from Gafsa are important for learning more about how animals adapted to the hothouse world of the Eocene, a period that may foretell what’s in store for the planet in coming years if carbon emissions don’t slow.

But while Mr. Bazzi’s team removed the fossils from Tunisia, they did so under an agreement with local institutions that Mr. Bazzi himself insisted on: After he finished his research, the remains would be returned.

Historically, these specimens are seldom returned, and locals may never see them again. But Mr. Bazzi and his colleagues are part of a movement among the next generation of paleontological researchers, one attempting to change scientific practices that descend directly from 19th century colonialism, which exploited native peoples and their natural histories.

Over the last few decades, multiple countries have demanded the return of looted art, antiquities, cultural treasures and human remains from museum collections in North America and Europe. Countries such as Mongolia and Chile have likewise demanded the return of collected fossils, from tyrannosaur bones to the preserved remains of giant ground sloths.

“There’s a consistent pattern with these specimens of high scientific or aesthetic value, where they’re taken out of the developing world and shipped abroad to be displayed and shown to a wider audience elsewhere,” Mr. Bazzi said. “There should be some balance so that local parties have a say in what happens to them.”

Many countries with less money to spend on funding their own scientists are home to important fossil deposits that could drive major advances of our understanding of the prehistoric world. If the field of paleontology is to move forward, these researchers say, it’s important to figure out how to study specimens in these places without extending colonial legacies.

That will take the development of a different approach to the field, more like the ones being tried by Mr. Bazzi and other scientists that rely less on extraction and more on collaboration with and the development of local institutions.

While many cultures throughout human history have long traditions around collecting or studying fossil remains, the discipline of scientific paleontology — as well as the formation of modern natural history museums — arose in the 18th century, when European powers were actively colonizing large swaths of the globe. According to Emma Dunne, an Irish paleontologist at University of Birmingham in England, European scientists were part of a colonial network that sucked natural wealth — including fossils — into imperial capitals.

In the 20th century, some countries pushed back. Brazil and Argentina provide government funding of paleontology. Those countries and others, such as Mongolia, established laws forbidding the export of fossils from within their borders. The two South American countries also mandate that foreign researchers work with local paleontologists for research on fossils found in the country.

“You still do have non-Argentinian researchers working with local ones, for example,” said Nussaibah Raja-Schoob, a Mauritian paleontologist based at Germany’s University of Erlangen-Nuremberg. “But you definitely see that there is a bigger local influence.”

Even in the aftermath of colonialism, however, fossils from across the globe still tend to end up in American and European museums. Some are collected through approved scientific expeditions. But because fossils are also traded privately, fossil-rich countries with fewer resources and legal protections often see interesting and potentially valuable finds put up for auction in Western markets.

Questions about where fossils belong and who is best suited to work on them have sparked sharp controversies in recent years. In some cases, researchers have raised concerns about the ethics of working on such privately collected fossils — particularly those which may have been exported illegally. At the same time, paleontologists in Western countries have bristled at the rules required by countries like Brazil.

“I do not think governments should dictate who works on fossils,” he said. “I think scientists should be able to choose who they work with.”

These sorts of controversies are one example of the way the discipline’s colonial history lingers, Ms. Raja-Schoob says. But there are others. Much of global paleontology is still conducted in languages like English, German and French. And according to an ongoing research project by Ms. Raja-Schoob and Dr. Dunne, countries with higher G.D.P.s — places like the United States, France, Germany and China — tend to report more fossil data, in part because they have the money to invest in academic paleontology programs.

Many institutions around the world have neither the tools nor enough government support for sophisticated studies of fossils. But that is something scientific institutions from wealthier countries can help with.

“We have to ask why we’re bringing this knowledge to the centers, rather than spreading it out,” Dr. Dunne said. “We can work with things like 3-D scans of fossils, we can work with digital data sets. The problem obviously is getting funding for museums to do this for themselves.”

“Why not put that money into local people doing something?” she asked. “At the end of the day we are all going to be using that data. So why should they not also benefit?”

While the fossil riches present in the rocks of North Africa and the Levant have long drawn fossil hunters and scientists, Mr. Bazzi said, the majority of fieldwork has resulted in fossils being exported to European or American institutions. Mr. Bazzi’s parents are from Lebanon, while his colleague Yara Haridy — a doctoral student at Berlin’s Museum für Naturkunde — was born in Egypt. Because of the lack of opportunities, neither can find steady academic work in paleontology in the Middle East.

As part of their trip to Gafsa, both wanted to try to start building up paleontological resources instead of just removing them.

That was part of what led Mr. Bazzi and Ms. Haridy — after many careful conversations with local participants over coffee and tea — to the ruins of a museum in the small mining town of Métlaoui. The museum had been burned down during the protests of the 2011 Jasmine Revolution that helped trigger the Arab Spring. It had not been restored, and on their third day in Tunisia, a mining engineer told them it might be worth visiting.

Stepping carefully through the ruins, they found an unexpected wealth of fossil material: immense turtle shells, crocodile jawbones, dinosaur vertebrae and even ancient human remains, all scattered across dusty floors and charred rubble.

The collection had to be salvaged, the team decided, but not taken out of the country.

“Every other question we got was, ‘Oh, are you guys going to take this stuff?,’” Ms. Haridy said. “And we told them, no, it’s yours. It should stay here. It’s part of this region’s story.”

Instead, they partnered with the people of Métlaoui to help them save the remains. Within a day, the town’s mayor and other community authorities had assembled local workers and students from Gafsa University. Mr. Bazzi’s team handed out gloves and masks and a stream of Métlaoui residents went to work pulling fossils from the ruins.

“It was a pretty big operation,” Ms. Haridy said. “Everyone got really excited.”

The team cataloged the bones before boxing and sending them to a government facility in Gafsa. The hope is that the museum remains will provide the nucleus for an ongoing paleontology program at Gafsa University; Mr. Bazzi has been helping to supervise interested students.

One such student, Mohammed Messai, said that he didn’t know much about paleontology before meeting Mr. Bazzi, but that he’s now made identifying the fossils recovered from the museum part of the research for his master’s degree in science.

It’s important for paleontologists to build genuine partnerships with local researchers, Ms. Haridy said. Not only does this create community engagement and prompt people to regard fossils as worth protecting, it also helps ensure that specimens are properly studied when they are returned to their country of origin.

“There’s this problem where even if a country demands fossils back, like Egypt did for a long time, a lot of the paleontological knowledge doesn’t necessarily return with it,” she said. Without investing in independent paleontology programs in the countries in question, fossils can end up “consigned to a dusty room, where nobody knows what to do with it.”

To some extent, the presence of these conversations is itself a sign of change.

“When I began paleontology some 45 years ago these issues were of no concern,” Dr. Martill said. “Today, they seem to be dominating paleontological discussions. Perhaps it is me who is now out of touch.”

He added that, “a fantastic new generation of paleontologists emerging and they are flexing their muscles and demanding different things.”

“Ideally, the Tunisian government would just believe these people on their own and agree that their fossils are important and worthy of preservation, and is of international interest,” Ms. Haridy said. “But they tend to get interested once scientists are actually actively trying to visit and actively trying to work with people.”

“You now have local people starting to drive this themselves,” Mr. Bazzi said. “Eventually there will be no need for others to come and do it.”