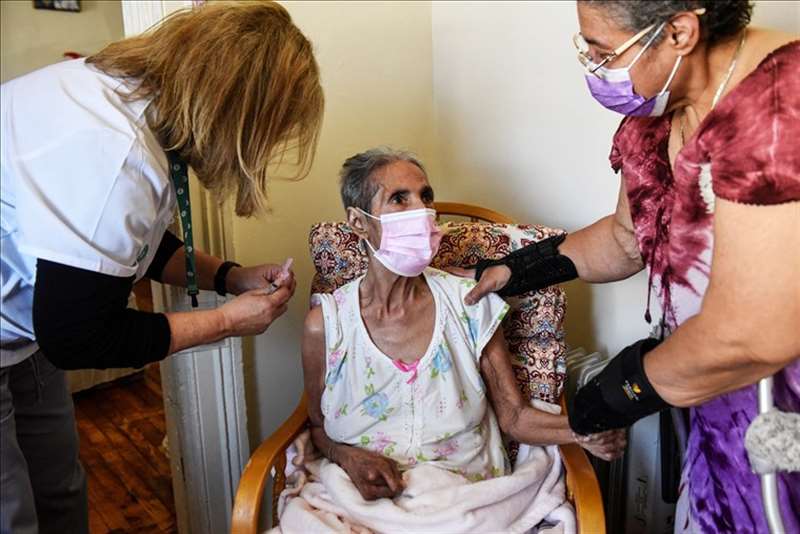 People under 60 are accounting for the majority of new Covid-19 cases across the country — likely a testament to the success of the vaccines that have been administered to primarily older, more vulnerable Americans.

But doctors say that patients seeking care this time around are younger and, notably, not as sick.

In New York, where cases are rising, some Covid-19 patients still require hospitalization, but the numbers of such patients are nowhere near the “astronomical” levels from a year ago, said Dr. Frederick Davis, an associate chair of emergency medicine at Northwell Health’s Long Island Jewish Hospital.

“The cases we are seeing are the younger groups that probably aren’t eligible for vaccines just yet,” Davis said.

The increase in immunity among older adults is illustrated in the shift in age groups most likely to seek care for Covid-19.

Nationwide, “the number of 25-to-49-year-olds visiting U.S. emergency departments for diagnosed Covid-19 is now higher than the number of visits among patients 65 and older,” the CDC said in a statement to NBC News.

In Michigan, where cases have more than doubled in the past two weeks, doctors are seeing increases in patients between the ages of 10 and 60, with hospitalizations among people in their 50s rising at the fastest rate, said Dr. Joneigh Khaldun, the state’s chief medical executive.

“Even if you may be at lower risk for getting the virus, you can still get the virus,” Khaldun said. “People simply cannot let their guard down now. No one lives in a bubble.”

Dr. Usamah Mossallam, an emergency department physician at Henry Ford Health System in Detroit, cautioned that even younger people can get quite ill from Covid-19.

“I’ve also seen my fair share of people who require hospitalization and ICU admissions, and they’re in their 40s,” Mossallam said.

At Northwell health system in New York, Davis said that many of the Covid-19 cases are due to domestic travel.

“They went to a gathering somewhere out of state, whether it was family they hadn’t seen in a long time, or maybe a wedding,” Davis said. “Sometimes multiple family members come in from the same event.”

Spring break may also be partly to blame for the recent rise in cases, particularly as some states have rolled back restrictions and mask mandates, said Dr. Joseph Khabbaza, a pulmonary and critical care medicine specialist at the Cleveland Clinic. But vaccinations among the highest-risk demographics may prevent hospitalizations from rising as precipitously this time as they did during previous surges, he said.

“A lot of places opened up and we saw more travel for spring break, so we certainly expected a bump in cases,” Khabbaza said. “But when these people go back home to their workplace or to their loves ones and family members, at least more of the higher risk people are going to be vaccinated.”

The trend toward younger patients with milder illness is likely the reason many intensive care units are no longer inundated with severe cases.

At the pandemic’s peak last year, Dr. Todd Rice, director of Vanderbilt University Medical Center’s medical intensive care unit in Nashville, Tennessee, said he had 60 Covid-19 patients at once. Now, he has five.

The shift is likely because “we’ve changed the demographics of the people who are being affected” by the illness, Rice said.

The virus itself, however, is shifting and changing. “We know that about 26 percent of all sequenced virus is now the B.1.1.7” variant, Walensky said during Monday’s briefing. That variant has been shown to be more contagious.

“This variant is probably less forgiving, and more infections will occur,” Walensky said.

Khabbaza said that while he remains hopeful that a new wave of infections won’t be accompanied by as many hospitalizations and deaths, it’s hard to predict the full impact of the variants.

“We haven’t had a surge with a variant yet, so we’re not really sure what to expect for these next couple weeks and months,” he said.

The possibility of long-term illness combined with more transmissible variants are major reasons to get vaccinated, even as cases are trending toward younger, healthier patients.

“The good news with the variants is, they are all mostly responsive to vaccinations,” said Dr. James McDeavitt, senior vice president and dean of clinical affairs at Baylor College of Medicine in Houston.

“We can still vaccinate our way out of this crisis.”