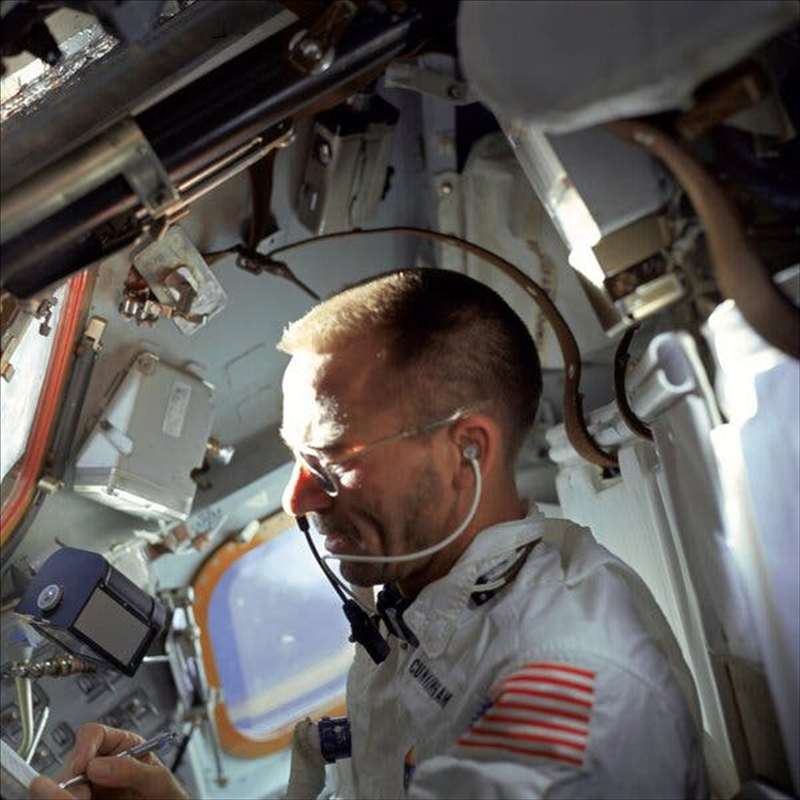 In 1968 he was a member of the first manned Apollo mission, which buoyed an America shocked by a fatal capsule fire the previous year.

Walter Cunningham, a civilian astronaut whose only mission in space, aboard Apollo 7, revived NASA’s quest to put men on the moon in the wake of a landing-pad fire that killed three astronauts, died on Tuesday in Houston. He was 90.

Mr. Cunningham, a physicist and a former Marine pilot, joined with Capt. Walter M. Schirra Jr. of the Navy and Maj. Donn F. Eisele of the Air Force on a virtually flawless 11-day mission in October 1968. They completed 163 orbits of the Earth (four and a half million miles) in a reconstructed space capsule with many safety modifications and became the first NASA astronauts to appear on television from space.

The flight — the first manned Apollo mission — buoyed an America shocked by the capsule fire that took the lives of Virgil I. Grissom, Roger B. Chaffee and Edward H. White II as they rehearsed for an envisioned Apollo 1 mission at Cape Kennedy, Fla., in January 1967.

“We carried the nation’s hope with us,” Mr. Cunningham wrote in his memoir, “The All-American Boys” (1977). “Twenty-one months before, a fire on the very pad from which we launched had killed three of our teammates. One more setback now, and the prospects of landing a man on the moon before 1970 would be gone forever.”

“The task wasn’t only technical,” he added. “We also had to address any psychological barriers that still remained.”

Mr. Cunningham, a lean figure with a brush cut, seemed to fit the astronaut archetype. But unlike many of the other early astronauts, he had never been a test pilot. His selection by NASA reflected the agency’s increasing interest in recruiting astronauts with scientific expertise.

He was the second civilian in space, after Neil Armstrong, who had flown in the Gemini program and later became the first man to walk on the moon.

Apollo 7 — which blasted off on Oct. 11, 1968, following unmanned Apollo flights in the wake of the disastrous fire — passed its maneuverability and reliability tests. The capsule rendezvoused with an orbiting stage of the Saturn 1-B rocket that had sent it into space, indicating that it would have no trouble docking with a lunar module that would carry two astronauts from the capsule to the moon and back. The Apollo 7 astronauts, who comprised NASA’s first three-man crew, also successfully tested an engine in the rear of their capsule designed to put the spacecraft into and out of lunar orbit on a future mission.

And for the first time, astronauts carried a camera providing TV images. They demonstrated how they could float in their weightless environment in what became known as “The Wally, Walt and Donn Show,” and they put together a hand-lettered sign that said, “Hello From the Lovely Apollo Room, High Atop Everything.”

There was a problem, though: Captain Schirra had a heavy head cold, Major Eisele had a lesser cold and Mr. Cunningham, as he would later recall, felt “a little blah.” NASA feared that the colds could result in the bursting of eardrums as the astronauts returned to Earth.

They were, in fact, just fine when they splashed down some 325 miles south of Bermuda, less than a mile off target. Their mission was so successful that Apollo 8 orbited the moon, another important prelude to the moon landing in July 1969.

But Apollo 7 had its blemishes. It would be remembered for Captain Schirra’s disputes with NASA controllers in Houston. Speaking on an open microphone monitored by the press, he protested the agency’s ambitious schedule for TV transmissions, which he felt took valuable time away from the astronauts’ work. He also insisted that the astronauts dispense with the rule requiring pressurized helmets on re-entry, fearing that this could damage their eardrums in light of their colds. He got his way.

Captain Schirra, who flew in the Mercury and Gemini programs, had told NASA he planned to retire after Apollo 7. That mission proved to be not just the first but also the last for both Mr. Cunningham and Major Eisele.

“I never figured out why Schirra had such a burr under his saddle,” Gene Kranz, one of the flight directors for Apollo 7, wrote in his memoir, “Failure Is Not an Option” (2000). “Perhaps he just could not deal with the irritation of having something so piddling as a cold invade the trip of a lifetime. In any case, the careers of the two younger astronauts suffered. Neither Cunningham nor Eisele flew in space again.”

Chris Kraft, the director of flight operations for the Apollo program, wrote in his memoir, “Flight: My Life in Mission Control” (2001), that Mr. Cunningham and Major Eisele had supported Captain Schirra on the helmet issue. Mr. Kraft said he regarded their collective stance as “insubordinate” and recalled telling Donald Slayton, who selected crews for the Apollo missions, that “this crew shouldn’t fly again.”

The closest that Major Eisele came to going into space again was when he was part of the backup crew for Apollo 10, an orbiting of the moon involving a rendezvous with the lunar module.

In his memoir, Mr. Cunningham wrote that Captain Schirra had viewed each encounter with the ground controllers as “a challenge to his authority and judgment as captain of the ship,” and that “I did not feel justified in the behavior and abuse that was being heaped on the ground.”

He wrote that “the entire crew was tarred and feathered” by Captain Schirra’s behavior, although “we were collectively never hauled on the carpet.”

The Apollo 7 crewmen did have to settle for NASA’s second-highest award, the Exceptional Service Medal, while subsequent Apollo crews and the crews of the Skylab program were given the top award, the Distinguished Service Medal.

NASA upgraded the Apollo 7 astronauts’ medals to the Distinguished Service citation at an October 2008 ceremony, citing the mission’s success, notwithstanding the arguments with flight controllers. But Mr. Cunningham was the only crewman alive by then. Major Eisele, who died in 1987, was represented by his widow, Susan Eisele-Black; Captain Schirra, who died in 2007, by the astronaut Bill Anders.

Mr. Kraft struck a conciliatory stance. “We gave you a hard time once, but you certainly survived that and have done extremely well since,” he told Mr. Cunningham in a recorded message. “You’ve done well by yourself, you’ve done well for NASA, and I am frankly very proud to call you a friend.”

Ronnie Walter Cunningham was born on March 16, 1932, in Creston, Iowa, the eldest of five children. His father, Walter, had a small construction business. When he was young, his family moved to Venice, Calif.

He entered the Navy in 1951 and flew Marine Corps jets. After leaving active service in 1956, he received a bachelor’s degree and a master’s in physics from the University of California, Los Angeles. While at the RAND Institute in October 1963, pursuing doctorate-level studies, he was named to NASA’s third group of astronauts.

Soon after Apollo 7, Mr. Cunningham was named director of what became known as the Skylab program, which developed America’s first space station. The astronaut Pete Conrad succeeded him in 1970. Mr. Cunningham resigned from NASA the next year after failing to get an assignment to fly in Skylab’s forthcoming missions.

Mr. Cunningham later became a senior executive at financial and real estate companies. In 2012, he joined with a group of former astronauts and NASA employees who sent a letter to the agency criticizing what they felt were its unproven assertions that man-made carbon dioxide was a major factor in global warming.

Mr. Cunningham’s survivors include his wife, Dorothy. Complete information on survivors was not immediately available.

Reflecting on his NASA experience, Mr. Cunningham said it gave him confidence to master whatever challenges lay ahead.

“I am a physicist, and everything I encountered in the flight can be explained,” he said when asked whether he saw anything in space that had changed him. “It did not change my view of religion, life, earth. It had no revelations.”