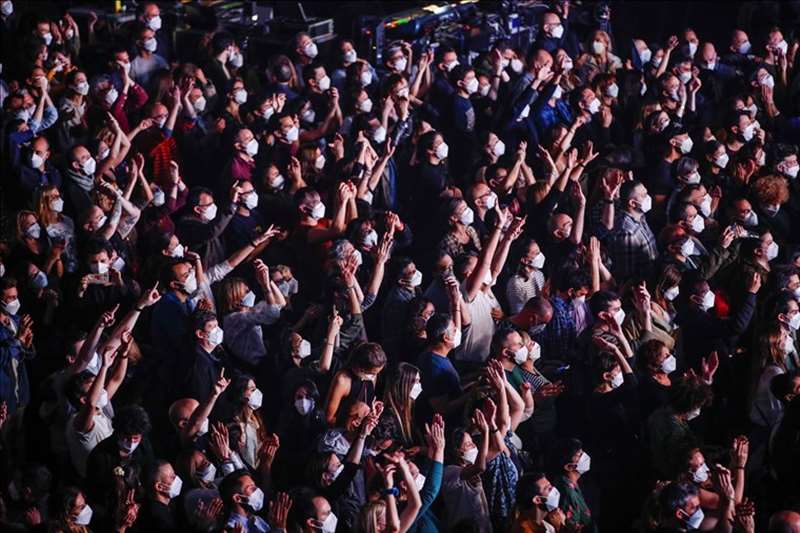 Some 5,000 fans at the show for Spanish indie band Love of Lesbian had to wear masks but social distancing was not required in the Palau Sant Jordi arena.

“It was spectacular. We felt safe at all times. We were in the front row and it was something we’d missed a lot,” said publicist Salvador, 29, after the show. “We are very proud to have had the chance to take part in this. We hope it’ll be the first of many.”

Health controls at the entrance delayed the start of the concert, but could not dampen the celebratory spirit.

“Welcome to one of the most exciting concerts of our lives!” lead singer Santi Balmes told the crowd to a roar of cheers.

The government-approved concert served as a test for whether similar events will be able to start up again.

“It will be safer to be in the Palau Sant Jordi than walking down the street,” concert co-organiser Jordi Herreruela told Reuters earlier on Saturday.

By midday, three out of 2,400 people already screened had tested positive and one had come into contact with a positive case, said Dr. Josep Maria Libre, a doctor who oversaw the testing. They were unable to attend the concert and would get a refund.

Attendees received their antigen test results in 10 to 15 minutes via an app on their phones. The test and a mask were included in the ticket price.

“I believe today we have made one thing a reality which is to show the world that culture is safe,” said Ramon, a 49-year-old fan.

Spain had one of the worst early outbreaks of Covid-19 in Europe, with just over 75,000 deaths since the start of the pandemic.