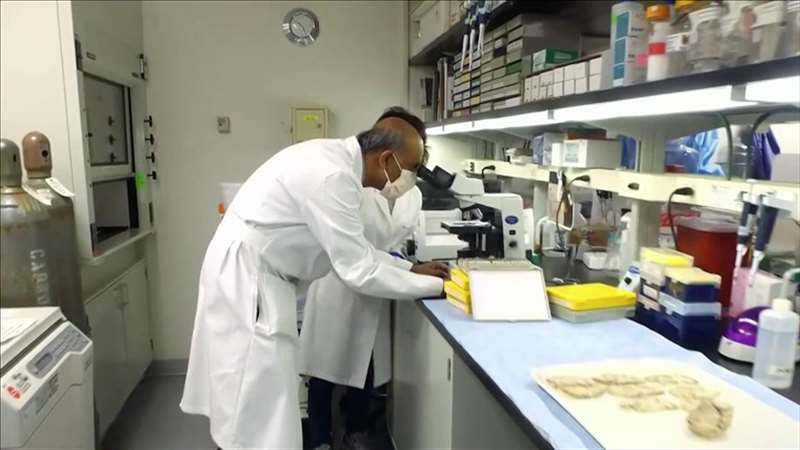 His goal: learning all he can about how SARS-CoV-2, the virus that causes Covid-19, affects brain tissue, potentially leading to long-term symptoms of the virus.

“The involvement of the brain is quite extensive,” said Nath, a researcher at the National Institutes of Health in Bethesda, Maryland. The brains he studies come from Covid-19 patients who died suddenly, and were all donated by family members.

The implications are enormous. An estimated 10 to 30 percent of the 28 million Covid-19 cases in the United States could lead to long-term symptoms. That’s as many as 8.4 million people unable to shake ongoing physical problems related to the virus.

The 30 brain samples in Nath’s lab come from Covid-19 patients ages 5 to 80. All died either at home or in a long-term care facility.

The samples are analyzed using the strongest magnetic resonance imaging, or MRI, machine available for use on the human body. The images give the team never-before-seen details of brains affected by SARS-CoV-2.

Nath’s team looked for active virus in the brain tissue but found none. What they did find was a large amount of inflammation.

“We think the brain pathology is a critical part of the illness and probably causing the demise of a number of these patients,” Nath said.

But that is only a theory at this point, and it may not be the only cause of long-term Covid-19 symptoms.

NIH Director Dr. Francis Collins told NBC News that it is unclear whether a blood clotting problem, the immune system going haywire or some other issue is leading to seemingly unending symptoms in some patients.

“This is all hands on deck,” Collins said. “If any organization on the planet can figure this out, it’s NIH.”

Armed with $1.15 billion from Congress, the agency can now fund a variety of research projects looking into long-haulers, which the NIH refers to as “Post-Acute Sequelae of SARS-CoV-2 infection,” or PASC. (The word “sequelae” is Latin meaning a condition that occurs following a disease.)

Another project is aimed at searching for a biomarker that could indicate whether a person sick with Covid-19 might be at risk for long-term symptoms. The NIH’s Dr. Daniel Chertow heads that study, which is still in the process of recruiting patient volunteers.

The research will analyze lung fluid samples, as well as images of the brain, heart and lungs. “It’s going to take time,” Chertow said, adding that he “shares the drive to get answers as soon as humanly possible.”

“I promise you we are all in on this,” Collins said. “There will be no stones left unturned.”

Stephanie Gosk is an NBC News correspondent based in New York City. She contributes to “Nightly News with Lester Holt,” “TODAY” and MSNBC.

Lauren Dunn is a producer with the NBC News medical unit in New York.