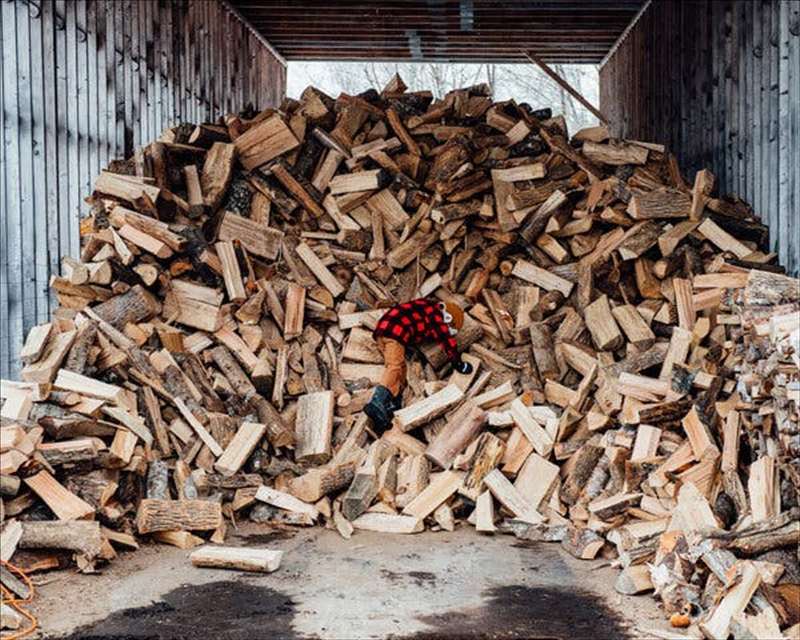 ORLAND, MAINE — The cluster of a dozen or so houses in rural Maine could be a summer camp closed for the winter. The compound has an eclectic, informal feel, with colorful hand-painted signs and stained glass, pottery, and woodworking studios. It was quiet on a bright, cold winter morning. Except for the line outside the food pantry, and the cars pulling in to leave small passengers at child care.

The site, a resource center for low-income and homeless families called H.O.M.E., was founded in 1970 by a small band of Carmelite nuns. They cleared forest with Norwegian Fjord Horses and set up a crafts-making operation for the local community and a gift shop — and then a child-care center, a shelter program, an auto repair garage, a saw mill, a shingle mill, a garden and a greenhouse, a GED program, a food co-op that has become a food bank, and a home-construction unit.

During a bitter winter a few years ago, the organization added another community service: a wood bank. Employees at H.O.M.E, which stands for Homeworkers Organized for More Employment, had noticed that some firewood had been disappearing at night from outdoor sheds. And Tracey Hair, the executive director, started hearing about households with children and without heat. “Folks were needing firewood yesterday,” Ms. Hair said. “That’s when Clint started to rattle my cage about starting a wood bank.”

Clint Clagett, who runs all things wood at the organization, and Ms. Hair had nowhere to live when they came to H.O.M.E many years ago. Both have become leaders at the place that took them in. Both know cold.

“We had hard times, and used to burn everything,” Ms. Hair said as she and Mr. Clagett gave a tour of the wood bank: the sheds stacked with dry firewood, the log splitter, the piles of timber ready for Mr. Clagett’s log roller and chain saw.

“We were so poor, we were accepting donations,” Ms. Hair went on. “We are so grateful now that we can give wood away.”

Wood banks are modeled on food banks, providing fuel assistance to people in need who may have to choose between “heating or eating,” as many who volunteer at wood banks put it.

Some experts see wood banks as a way to assist people hurt by the impacts of climate change and to help contend with a growing supply of wood — from trees killed by extreme weather and from trees killed by pests, both invasive species and native populations no longer constrained by the long deep freezes of another era.

“Lots of people are on the edge of poverty and cannot afford unexpected events: a tree falls on your house or the power is out and your pipes freeze,” said Jessica Leahy, a professor at the University of Maine’s School of Forest Resources. “Heating their homes becomes one of those things that is especially hard to cover.”

The H.O.M.E. wood bank was designed for such emergencies. It is small, providing “bridge assistance,” often while people wait for state services. Ms. Hair said she expected increased need this winter. “There are people who wouldn’t qualify for state heating assistance, but desperately need some help this year because of Covid,” she said, right before dashing inside to put on warmer socks. “We don’t want more people to come into homelessness.”

Ms. Hair said she expected climate change to increase need as well. Warming temperatures — the state’s average annual temperature has risen 3.2 degrees Fahrenheit since the late 1800s, according to a 2020 report by the University of Maine — have led to more winters without an insulating blanket of snow. “In an open winter, pipes tend to freeze more,” said Ms. Hair, noting that people who live in trailers are particularly vulnerable to such damage.

Severe weather events, like the snowstorms that have hit Texas, can trigger major power failures, which have been on rise, according to a report by Climate Central. As part of their climate resiliency plans, at least a few Northeastern towns have recommended creating wood banks for when the grid fails.

The same climate-change-driven conditions and disasters that lead some people to need firewood are providing some of that very firewood. Wood bank volunteers in several states said there was more surplus wood. Some said they saw increased donations from utility companies, state foresters and arborists because of pruning to prevent power failures and because of trees blown down during storms.

Trees are also dying because of insects. That has led to increasing supply for wood banks in some areas; in others, infestations have complicated operations. The detection of the emerald ash borer in Portland and the establishment of quarantine zones, for instance, has prevented the Cumberland Wood Bank from making deliveries to some towns they used to supply. “Now we have to consider where the wood is coming from and where it is going,” said Bruce Wildes, who founded the wood bank in 2007.

For some wood banks, mitigating future climate impacts by creating more resilient forests is a consideration. That is part of the rationale behind a new wood bank on Blue Hill Heritage Trust land in Surry. “Thinning helps with climate resiliency,” said Sandy Walczyk, a forester, as she scanned the site. “The wood bank will be here, but the wood will come from trust land all over.”

The connections between climate impacts, wood supply, and poverty have drawn researchers at the University Massachusetts Amherst and the University of Wisconsin to study wood banks on a national scale. Growing out of dozens of interviews of wood bank volunteers done by Clarisse Hart, director of outreach and education at the Harvard Forest, the team has identified 82 wood banks across the country.

“What can we do now from a realistic standpoint with all this wood?” asked Richard Harper, a professor of environmental conservation at UMass Amherst. “Wood banks present one small piece of this larger puzzle of wood utilization.”

Several did. Gil Tenney heard about the guide and, with a handful of others, started a wood bank in Castine, on the eastern side of Penobscot Bay. The group raises money to buy logs wholesale (many wood bank operators said they take care not to undermine local firewood dealers). They split and season, or dry, the wood and give away about 10 cords a winter. Like many wood banks, Castine’s is on land made available by the town. Like all wood banks, the backache-inducing labor is done by volunteers, most of whom are retirees. “We are small, we are energetic, and we are an average age of 75,” Mr. Tenney said.

The Castine wood bank is a short drive from H.O.M.E., and the operations help each other from time to time, alerting each other to people in hardship.

Only some wood can be used right away. Most of it needs to be dried for a year or so. “The firewood that people in poverty were getting was often green and creating creosote,” Ms. Hair said. Wood smoke causes air pollution, and can cause severe health problems, including asthma and cardiovascular damage. Seasoned wood, as Ms. Hair noted, can “burn warmer and safer.”

Burning wood for fuel also releases carbon, and is a subject of debate among people seeking to mitigate climate change. Some contend that the carbon in trees now should stay in them for as long as possible, preventing further current emissions. Others argue that burning firewood is, over time, “carbon neutral” — the tree pulled in that carbon and will release it as it decays — and that new trees can grow.

Many working with wood banks note that all those concerns are valid. Ideally, said Dr. Leahy, everyone using firewood would have a modern clean-burning stove with low emissions, working smoke alarms, great insulation, and non-fossil fuel options. “But really, we need smart portfolios that make sense for the areas that exist. For rural areas, wood banks make sense,” she said. “How do we keep people from freezing tonight?”

That is what struck Bob MacGregor when he read about Dr. Leahy and Ms. Vivian’s guide and looked at a map revealing need in his area. “It was glowing red,” said Mr. MacGregor, who co-founded the Waldo County Woodshed in 2015.

He has only seen need increase. The wood bank is now one of the largest, if not the largest, in Maine. It has expanded from one site to ten and gave away 130 cords last winter, up from 20 the first season.

On a late Friday afternoon in January, Mr. MacGregor dropped two cords at one of the newest outposts. Then he drove the wood bank’s yellow dump truck to pick up a donation from Kella River and Scott Simmons, who had committed to giving a cord a month in memory of Mr. Simmons’s father.

“We have both been completely cold and broke in the past, and now we have abundance and are giving back,” said Mr. Simmons. “That’s what we burn when the electricity goes out: wood.”

Since she moved to Maine a decade ago, Ms. River, who is a social worker, said she has seen more ice storms, more trees coming down, and more economic instability as jobs, like lobstering, disappear. Some people who used to plow snow have lost that income too, she said. “There is going to be more and more of that with climate change.”

By 7:30 the next morning, Mr. MacGregor was at the main site in Searsmont where, over the course of several hours, volunteers and clients and clients who are volunteers came and went.

Michael Osborne took a break from tackling a mountain of logs with his chain saw. “We lost everything because of medical bills and my lost jobs,” he said as he stood with his wife, Patricia, describing a back injury that left him unable to do construction work. “We had moved out to an 8-by-8 tent on someone’s land.”

Firewood from the Woodshed helped them survive that winter, and it is helping them this winter. “You need wood, you get wood,” Mr. Osborne said.

The Osbornes are regular volunteers at the wood bank now. “There are people coming here who are way worse off than we are. It keeps you grounded,” Mr. Osborne said. “There is a huge, huge need for heat and food.”