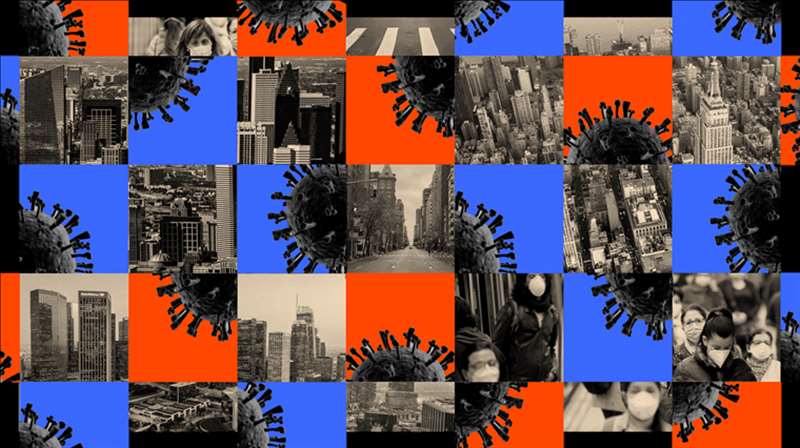 “If you look at it as a monolithic kind of event, you’ll miss a lot of detail,” said Dr. Thomas Giordano, chief of infectious diseases at Baylor College of Medicine in Houston.

Giordano views the Covid-19 outbreak in the U.S. as a “series of micro-pandemics.”

“What’s happening in Houston has not been the same as what’s happened in New York City or in Phoenix or L.A.,” he said. “They’ve had different curves, different mortality rates.”

For months, scientists have relied on the number of positive Covid-19 tests taken in a particular community — known as “percent positivity” — as an indicator of outbreak severity.

But as time goes on, that metric may lose importance. Percent positivity will change based on how many people are tested, Giordano said. The number of tests “will go down as we vaccinate more people,” he said, “and people will be less inclined to get tested.”

One way to get around the problem is to focus, instead, on Covid-19-related hospitalizations.

“The hospitalization rate, to me, is the most hard and fast number,” said infectious diseases expert Cameron Wolfe, an associate professor of medicine at Duke University School of Medicine.

No matter what we've done over the past year, we haven't made a big dent in the chances that a person who gets Covid will need hospital support.

“No matter what we’ve done over the past year, we haven’t made a big dent in the chances that a person who gets Covid will need hospital support,” Wolfe said. That means hospitalizations continue to be a good representation of overall cases in any community.

Hospitals also continue to test for Covid-19, providing another snapshot of community spread.

“Every hospital in the country is screening every single patient that comes in for Covid-19,” no matter what problem brought the patient to the hospital, such as a heart attack, said Dr. Timothy Brewer, an infectious diseases expert and professor of epidemiology at the UCLA Fielding School of Public Health.

“People who are sick enough to go to the hospital are going to go, regardless of whether or not they’re worried about Covid,” Brewer said.

The reproduction number of a virus indicates how many people a single sick person is likely to infect.

Scientists generally calculate the number based on several factors: how many people remain susceptible to a disease, how many people are currently infected and how many have some level of immunity, through either infection or immunization.

The reproduction number can be calculated in different populations, for example, at state or city levels, and it can fluctuate over time.

The lower the number, the better — and less than 1 is best.

That’s a problem, because it indicates that the outbreak will continue to get worse. “If we see the reproduction number increasing, we’re concerned,” Medford said.

Conversely, if the number is less than 1, it’s an indication that the community is in better shape. That would mean a single person is unlikely to pass the virus on to one or more people.

In the long run, the metric that will be most indicative of the country’s progress is the number of vaccinations administered.

“How many vaccines can we get into arms? That’s really how I can determine how well we’re doing,” Medford said.

As of Wednesday, the Centers for Disease Control and Prevention reported that 111 million shots had been given nationwide. But scientists say it’s important to drill down past the raw number to find out who is actually rolling up their sleeves.

“You can’t really look at overall vaccination rates without making sure that all populations have the same level of vaccination. Otherwise you might be potentially having small outbreaks,” said Dr. Peter Chin-Hong, an infectious diseases specialist at the University of California, San Francisco.

There may be significant variations in vaccine distribution in different areas of the country, as well as in communities of color. Those details will provide critical context for epidemiologists to interpret the vaccination numbers in the coming months.

“This new variant, which is taking over in the United States, is more transmissible,” Murphy said. “That jacks up the proportion of people who have to be immune.”

The more people are vaccinated, the closer the U.S. gets to herd immunity — the point at which enough people are immune to the virus that it can no longer spread. Immunity can come from both vaccinations and past infections.

But the true number of infections in the U.S. can be difficult to pin down, because many people who were sick never got tested. As a result, the epidemiologists whom NBC News spoke to overwhelmingly preferred to focus on vaccination numbers.

“It’s an absolute number,” Medford said. “I can, without a doubt, tell how many people have been vaccinated, and I know how effective those vaccines are.”

The jury’s still out on the so-called critical vaccination threshold — the percentage of the population that must be vaccinated to protect everyone else — and it can be a moving target.

Last year, for example, experts estimated that the U.S. needed to vaccinate 60 percent of the population. But as the virus changes to spread more easily, the percentage must increase.

Now it’s “closer to 80 percent, just because the B.1.1.7 variant is more transmissible,” said Bill Hanage, an associate professor of epidemiology at the Harvard T.H. Chan School of Public Health. “You need to have more people immune to stop” the spread.

Evidence has shown that the current vaccines are effective against the B.1.1.7 variant — even if the shots aren’t perfect.

Dr. Anthony Fauci, head of the National Institute of Allergy and Infectious Diseases, advised caution about using the term “herd immunity” during a congressional hearing Wednesday.

“We really, really need to be careful about this elusive terminology,” Fauci said. “We should focus on getting as many people vaccinated as quickly as we possibly can,” he said, rather than concentrating on an “arbitrary percentage.”

Ultimately, no single measure will determine when life can get back to “normal.”

“I don’t think there’s a metric that is going to say, ‘Oh, it’s over,'” said Justin Lessler, an epidemiologist at the Johns Hopkins Bloomberg School of Public Health, referring to the pandemic.

SARS-CoV-2, the virus that causes Covid-19, is probably here to stay, but it is expected to slowly become more like the flu, which requires yearly boosters.

That is, instead of an on/off switch, the end of the Covid-19 emergency in the U.S. will be more or less on a dimmer.

“It will become more of an old enemy rather than the scourge is it today,” Lessler said.