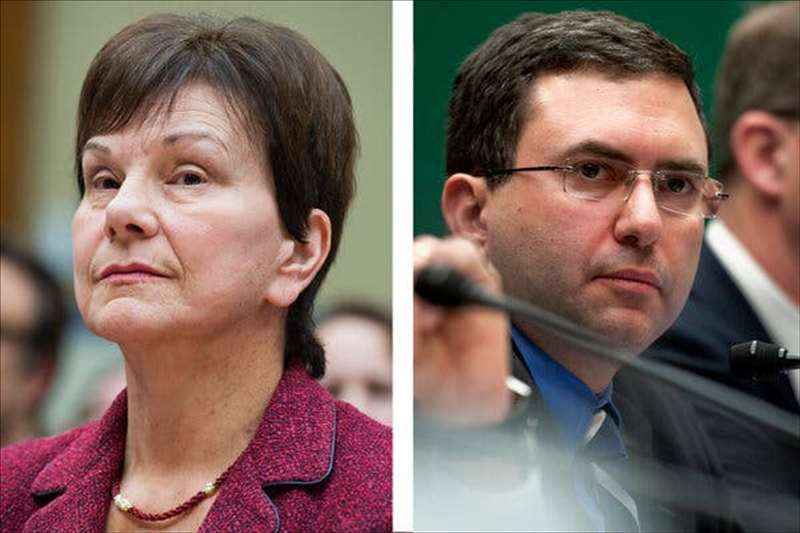 Two leading contenders generate wider debate about the leadership needed to restore morale and scientific integrity to an agency battered by the politicized Trump administration.

One month into his presidency, President Biden still has not named a candidate to head the Food and Drug Administration, a critical position at a time when new vaccines and coronavirus treatments are under the agency’s review.

The glaring vacancy lags behind the president’s selections of most other top government health posts, and has spurred a public lobbying campaign by supporters of the two apparent front-runners, Dr. Joshua Sharfstein, a former high-ranking F.D.A. official and Dr. Janet Woodcock, the acting commissioner.

It has also exposed rifts among Congressional lawmakers, within the public health and medical communities as well as the health and drug industries that depend on the F.D.A. for approval of their products. In particular, some public health officials have used the open position to debate the leadership qualifications needed to restore the agency’s morale and credibility after a year fighting both a pandemic and a president who often belittled the F.D.A.’s process for approving treatments and vaccines.

Administration officials say that Dr. Sharfstein and Dr. Woodcock have gone through at least partial vetting for the job. They attributed the delay to their focus on solving Covid vaccine shortages and distribution problems. They also noted that Xavier Becerra, the attorney general of California and who Mr. Biden has nominated for secretary of the Health and Human Services Department, faces Republican opposition that could jeopardize his confirmation.

Traditionally the incoming health secretary has input on the selection of the F.D.A. chief. This week, however, Mr. Biden nominated Chiquita Brooks-LaSure to run the Centers for Medicare and Medicaid Services, another position that would be part of Mr. Becerra’s portfolio if he is confirmed. A Senate panel is scheduled to hold a hearing on Mr. Becerra’s nomination Tuesday.

Former President Donald J. Trump spent nearly a year using the agency as a punching bag, regularly accusing it, without evidence, of regulatory mischief. He partly blamed the agency for his re-election loss, claiming it intentionally delayed approval of the first coronavirus vaccine. The most recent commissioner, Dr. Stephen Hahn, was widely considered a weak leader, criticized for not protecting the agency’s scientists against President Trump’s withering meddling.

“You’ve got an unprecedented amount of attention on F.D.A. because of the politicization of public health,” said Coleen Klasmeier, a former lawyer at the agency who is the global leader of the food, drug and medical device regulatory group at Sidley Austin. “There’s a real need for someone who can quickly and emphatically restore faith in the F.D.A. as an institution.”

Although the F.D.A.’s top priority is ending the pandemic, the agency has a very expansive reach. Its staff of nearly 17,000 people oversees products that amount to almost 25 percent of U.S. spending on consumer goods including food, prescription and over-the-counter drugs, medical devices, veterinary products, cigarettes, e-cigarettes and other tobacco products. The F.D.A.’s budget for fiscal year 2020 was $5.9 billion, some of which is paid by industry user fees.

It will continue to play a crucial role in the nation’s pandemic response; vetting more vaccines that are in development and under review as well as treatments, protective gear and devices. The agency also monitors the safety of the new vaccines and therapies as they are distributed and administered to the public.

A look at all the vaccines that have reached trials in humans.

“Every month is a crucial month in the pandemic,” Mr. Becker said. “There is so much going on regarding the vaccine, and new drugs and diagnostics. The time to have permanent leadership is now.”

Neither Dr. Woodcock nor Dr. Sharfstein would comment publicly because of the selection process underway.

Interviews with several officials and other people familiar with the leading candidates indicate that the primary disagreement centers on how each would manage the inherent tensions between the agency’s mission to get drugs onto the market quickly while ensuring they are safe and will work. The Biden team has also considered Dr. David Kessler, a former F.D.A. commissioner, Dr. Amy Abernethy, the F.D.A.’s principal deputy commissioner and Dr. Luciana Borio, the agency’s former acting chief scientist. Dr. Borio, now a vice president at In-Q-Tel, a private technology firm, also served on the president’s initial Covid-19 advisory committee.

Dr. Woodcock’s decades of service at the F.D.A. have made her more of a target for critics, and she has drawn particular fire over her agency roles during the opioid crisis.

Dr. Sharfstein, who held the No. 2 slot at the F.D.A. for nearly two years in the Obama administration, has extensive public health interests. At 51, he is a prolific writer, with more than 100 articles, editorials and journal papers published in the past few years on subjects ranging from training physicians to treating opioid addiction to reducing drug prices. He often criticized the Trump administration’s pandemic response, and called for the F.D.A. to “stand up for itself and for science, not politics.”

Early in the coronavirus outbreak, Dr. Sharfstein urged public health officials to focus on protecting racial and ethnic minorities, poor people and others who face social inequities. He has called for expanding housing to hold people with mild symptoms in quarantine; protecting tenants from eviction and offering incentives to food providers to deliver food to low-income neighborhoods for free or at a discount. He also proposed a federal coronavirus insurance program.

The last time his name was seriously floated for the top post, back in 2008, Dr. Sharfstein drew opposition from the pharmaceutical industry, which protested his criticism of off-label drug marketing and gifts from pharmaceutical companies to physicians.

Since 2015, Dr. Sharfstein has worked at the Johns Hopkins Bloomberg School of Public Health, where he is vice dean for public health practice and community engagement. He was also a former health commissioner for Baltimore.

“I think Josh would be a good choice,” said David Nexon, a former executive at the Advanced Medical Technology Association, known as AdvaMed. “He’s a very smart guy, very committed to public health and he has a broad public health background, which would be an asset because of F.D.A.’s wide-ranging responsibilities.”

Dr. Woodcock, 72, also commands deep support, especially within the vast network of cancer-related patient advocacy groups, researchers and the drug companies that help finance them. But Dr. Woodcock, who has spent over 36 years working for the agency, has also generated much stiffer opposition in this round than Dr. Sharfstein.

“In the past, even when the F.D.A. review of the drug was scathing, quite often Janet Woodcock or another high level F.D.A. official would be at the meeting, clearly pushing the advisory committee to recommend approval,” said Diana Zuckerman, president of the National Center for Health Research, a think tank and advocacy group. “But by law, these advisory committees are supposed to make recommendations independent of any F.D.A. pressure.”

But the loudest objections to Dr. Woodcock focus on the F.D.A.’s role in the opioid epidemic during her two stints as chief of its drug division, from 1994 to 2004 and then again from 2007 until she moved to Operation Warp Speed last May. (Between those two postings, she held other roles at the agency.)

In January, a group of nonprofit advocacy groups wrote to Mr. Becerra, the health secretary nominee, and Norris Cochran, the acting health secretary, saying that Dr. Woodcock’s 25-year tenure as F.D.A.’s drug division chief should disqualify her from consideration for commissioner.

“Much of the responsibility for the opioid crisis clearly rests with industry,” the group wrote. “But the fact that opioid manufacturers for decades disseminated false claims about the risks and benefits of opioids points to a dereliction of duty” by Dr. Woodcock’s division.

Dr. Woodcock’s role in the approval of new opioid products has also drawn strong opposition from some members of Congress, including Democratic Senators Maggie Hassan of New Hampshire and Edward J. Markey of Massachusetts. Senator Joe Manchin of West Virginia, has also been very critical of the F.D.A.’s handling of opioids under Dr. Woodcock.

“Multiple past F.D.A. commissioners have acknowledged that the F.D.A. made mistakes regarding the opioid crisis, yet the agency still has not fully reckoned with its past missteps,” Senator Hassan said in an email. “The F.D.A.’s decision-making processes for the approval and labeling of opioid drugs going back decades remain of serious concern, and it’s important that the next F.D.A. commissioner is someone who has demonstrated that they have learned from the F.D.A.’s past mistakes — not someone who has been involved in repeating them.”

The nonprofit advocacy groups’ letter prompted a defense of Dr. Woodcock orchestrated in large part by Ellen Sigal, co-founder of Friends of Cancer Research. Ms. Sigal is also chairwoman of the Reagan-Udall Foundation for the F.D.A., an influential organization created by Congress to help advance the agency’s mission and to speed development of new medical treatments.

Friends of Cancer Research receives much of its funding from drug companies. The 2019 top donor list for Friends of Cancer Research includes Amgen, AstraZeneca, Bristol-Myers Squibb, Eli Lilly Co., Genentech, Gilead, Merck, Pfizer and PhRMA, the pharmaceutical industry trade group. The Reagan-Udall Foundation receives funding directly from the F.D.A., but also lists drug industry donors, among them: Biogen, Johnson & Johnson, Teva and the Biotechnology Innovation Organization, known as BIO, which gave Dr. Woodcock an award in 2019 in conjunction with the Science History Institute.

“Senior career civil servants are required to make thousands of decisions over their careers and carefully guard their independence in a political environment,” the groups wrote. “Dr. Woodcock’s principles have remained steadfast: to protect and promote the health and well-being of the American public and to base decisions on sound science.”

Dr. Sharfstein’s supporters countered with a letter on Feb. 5, signed by 18 top academic physicians and researchers. “Dr. Sharfstein knows the F.D.A. and will ensure that its decision-making is scientifically beyond reproach, transparent and based on the principles of public health,” they wrote.

In addition to handling the current crises, the next commissioner must also renegotiate the user fees that the drug industry and other regulated businesses pay to support the agency. Other priorities for the agency will be developing a policy on cannabis-derived products, and continuing its work on regulation of tobacco and e-cigarettes.

Wayne Pines, a longtime Washington public relations specialist who also advised Dr. Hahn during his term at the F.D.A., pointed to how unusual it was to have such an intense debate for this agency’s position.

‘“I’m surprised it’s become such a public discussion for this particular job,” he said. “That has never really happened before.”