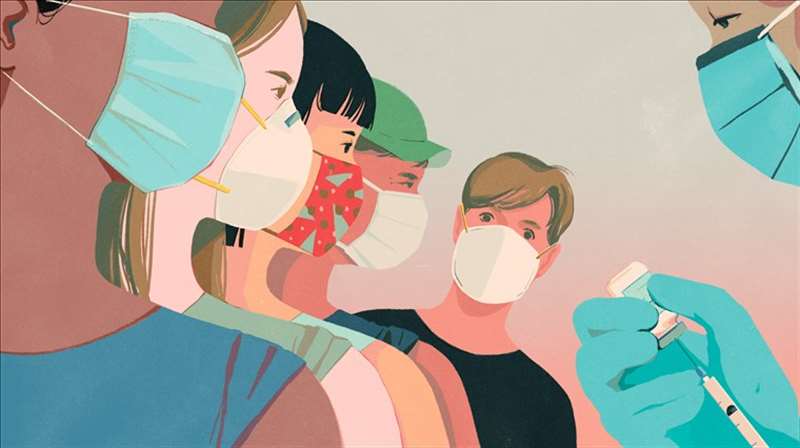 DETROIT — While most Covid-19 vaccination clinics around the country are focused primarily on first responders, essential workers and seniors, the city of Detroit is now offering shots to residents who haven’t made vaccination priority lists almost anywhere else in the country.

Among them: Adults with attention deficit hyperactivity disorder, vision or hearing impairments, and other intellectual and developmental disabilities.

The city’s move will lead to more equity and access for people with disabilities that Swenor hopes other communities will emulate. “It has the potential to spark a really important change,” she said.

At the same time, the decision to prioritize people with conditions that aren’t necessarily known to increase the risk of dying from Covid-19 points to the difficult and delicate choices facing local and state policymakers in a country where vaccination criteria differ considerably from one community to the next.

In much of the country, two people with the same job, who are the same age and are in similar health, could face radically different odds of accessing the shots depending on where they live, where they get medical treatment and the political landscape in their state.

And within communities like Detroit, where people in their 20s with ADHD can now get vaccinated ahead of people in their 50s with chronic heart or lung conditions, it can lead to difficult questions about whose health should come first.

“People with disabilities are being left out of Covid vaccine rollouts and being left out of data collection when somebody contracts Covid, and that leads to disparities,” said Dessa Cosma, the executive director of Detroit Disability Power, a social justice organization that led the letter-writing campaign.

Since everyone’s condition is unique, Cosma said, a broad definition is crucial to prevent “some very marginalized people from falling through the cracks.”

Among those states, none explicitly include ADHD or visual and hearing impairments among qualifying conditions, though people can make a case with a doctor’s note if they believe they should be eligible.

Even Michigan doesn’t include intellectual or developmental disabilities other than Down syndrome among its vaccination priorities. Detroit was able to include disabled residents because local communities “have the option to prioritize the groups within the guidance they feel are most at risk and at highest need of vaccination,” Lynn Sutfin, a spokeswoman for the state health department, said in an email.

Advocates for people with disabilities who have been pushing for vaccine priority across the country applauded Detroit’s decision, especially given the many ways that residents here are struggling.

In a city where nearly 90 percent of residents are Black or Latino and where 35 percent live in poverty, people with disabilities face multiple layers of discrimination and barriers to health care that put them at higher risk for Covid-19, said Justice Shorter, the disaster protection adviser for the National Disability Rights Network.

Some of the disabilities on the city’s list might seem surprising to people not living with those conditions, Shorter, who is blind, said.

“In medical terms, blindness itself might not be considered something that would put you at a heightened risk for Covid,” she said, unless you consider that people with visual impairments rely on others to drive them around or point out hazards, and can’t see whether someone offering to help is wearing a mask.

“You have to consider the ways in which you maneuver through society,” she said.

As for ADHD, advocates note that people with the disorder might not realize they’re too close to others. They might impulsively touch people or things and might get distracted and forget to wash their hands or wear a mask — all behaviors that would put them at higher risk for coronavirus infection.

They also might behave in ways that put off doctors or nurses and affect their ability to get quality health care.

While there has been some research on disabilities and Covid-19, advocates say more is needed. They note that disabilities are often left out of statistics that tally virus or death rates by age, race and location.

Some people with ADHD say they do not consider themselves developmentally disabled and questioned whether their condition should get priority.

“I would make sure that other people who could benefit from it more would get it first,” said David Penalver, 20, an aerospace engineering student at North Carolina State University who was diagnosed with ADHD last year.

But when told that a reason advocates believe people with ADHD should get priority is because of behaviors associated with higher coronavirus infections, Penalver reconsidered.

“That’s a good point,” he said. “I happen to have my hands on my face right now. I didn’t even think about that but, certainly, I’m touching handrails and surfaces going up and down stairs. I have a tendency to fidget. I touch my face. I bite my nails.”

Penalver isn’t alone in not immediately considering the ways that neurological and physical differences put people at risk, both during a pandemic and at other times, said Swenor, the epidemiologist from Johns Hopkins University.

“I hope more of that starts to happen even beyond Covid,” she said.

“We’re trying to get in the line,” said Cosma, who has a developmental disability and uses a wheelchair, and who was vaccinated this week. “We’re not trying to cut the line.”

Erin Einhorn is a national reporter for NBC News, based in Detroit.