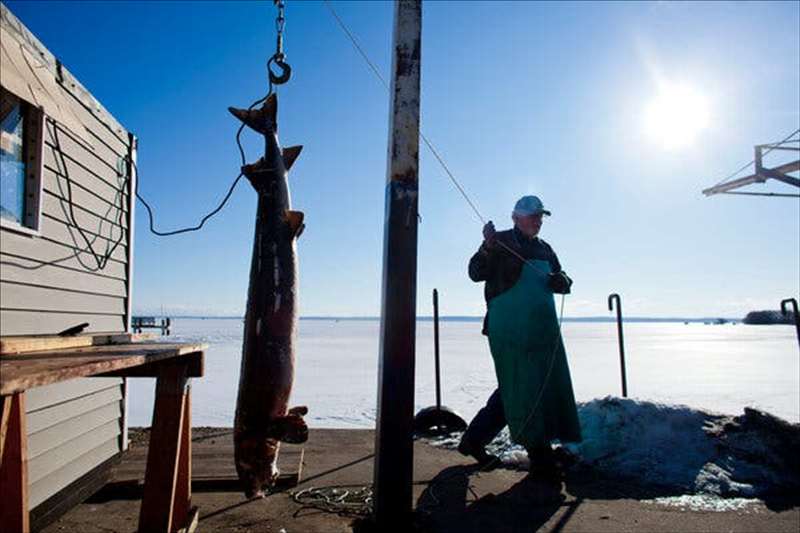 Ryan Koenigs, a biologist who oversees the state’s sturgeon spearing season in Lake Winnebago, is accused of accepting $20,000 worth of caviar in an illegal bartering scheme.

The eggs, processed into tiny black pearls prized by the gastronomic world for their burst-in-the-mouth, briny flavor profile, were said by state fisheries employees to be needed for research on the sturgeon population in Wisconsin.

But prosecutors say the state biologist who oversees the traditional sturgeon spearing season in Lake Winnebago and its watershed, a rite of winter for fishing enthusiasts in the state, had acquired an expensive and illicit taste for the caviar that is made from the eggs.

The biologist, Ryan P. Koenigs, an employee of the Wisconsin Department of Natural Resources since 2008, accepted at least $20,000 in jars of caviar in return for supplying to a caviar processor eggs that had been collected under the guise of research, a criminal complaint filed last week in Winnebago County said.

The caviar-processing business is run by a former biologist for the state, according to prosecutors, who said it was one of several caviar processors that obtained sturgeon eggs as part of the bartering scheme. The former employee, who prosecutors said obtained 65 pounds of roe in 2015 that produced $100,000 in caviar, has not been charged.

In Wisconsin, state law requires the eggs to be returned to the person who speared the sturgeon, if requested, or discarded. Prosecutors noted that caviar produced from sturgeon eggs can sell for more than $100 an ounce.

The arrest of Mr. Koenigs last week, along with three other people who were not state employees, followed a three-year investigation by the state and the U.S. Fish and Wildlife Service. A former supervisor of the fisheries unit told investigators that employees would accept caviar and eat some of it during team meetings, take some for personal use and give some to bars, according to prosecutors.

“Caviar is highly sought after in legal and illegal markets, and significant effort has been put into these types of investigations across the world to protect caviar-bearing sturgeon species,” the criminal complaint said.

Mr. Koenigs, 36, of Appleton, Wis., was charged last Wednesday in Calumet County with one count of obstructing an investigation by a conservation warden, the authorities said. Prosecutors said he had lied to investigators about the scheme, which began before he started overseeing the sturgeon spearing season in 2012. He also reset a state-issued cellphone in an attempt to conceal evidence, a criminal complaint said.

He was charged last Thursday in Winnebago County with one count of misdemeanor theft, prosecutors said.

Scott Ceman, a lawyer for Mr. Koenigs, said in an email that his client would plead not guilty. He declined to comment further on the case.

A spokeswoman for the Department of Natural Resources said on Sunday night that Mr. Koenigs had been placed on administrative leave but that she could not discuss the matter beyond his status with the agency.

The arrest of Mr. Koenigs, whom some news outlets referred to as the “sturgeon general,” came just days before Saturday’s start of sturgeon spearing season in Wisconsin.

Inspectors sometimes remove the reproductive glands from adult female sturgeon that contain eggs so that they can be studied.

“Lake Sturgeon and many sturgeon species are rare and are currently threatened, endangered, and even extinct in parts of the United States and world, making Wisconsin’s harvest season unique,” the criminal complaint in Winnebago County said.

Prosecutors said past investigations had tied caviar to organized crime and to traffickers that repackage roe as a higher-grade, more expensive caviar that was exported to Asian and European markets and resold in the United States.

“Because of this, it is important to ensure accountability with all aspects of our laws designed to prevent illegal commercialization of our natural resources,” the criminal complaint said.