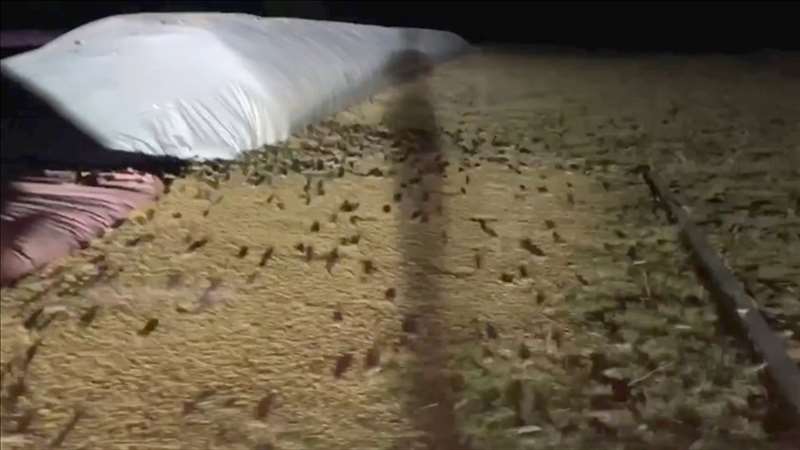 SYDNEY — After one of its worst wildfire seasons and a global pandemic, Australia is now facing its latest end-of-days challenge: a “monumental” plague of mice.

Millions of rodents are running amok in parts of Australia’s eastern states, with residents sharing horror encounters on a daily basis.

With an epicenter in rural New South Wales, farmers have uploaded videos to social media of mice blanketing their land, damaging crops and taking up residence inside homes.

Guy Roth, who works at a sprawling University of Sydney research farm near the New South Wales town of Narrabri, said mice had overtaken the property.

“I know we had two mice per square meter in our cropping paddocks at the peak … [so] if I have the math right, it’s 20 million mice. That’s more mice than the population of most big cities,” he said.

Roth said at one point he and his family were catching and disposing of around 100 mice each day inside their house and offices.

“They’re all around the house. Every time you open a drawer, you’re potentially going to find one,” he said. “You’ll be sitting at the desk and a mouse will run across it.”

He said the mice were eating the cotton crops as well as grain stored in silos.

Roth, who has spent his whole life in regional and rural Australia, said this was “the worst mice plague I’ve ever seen.”

“They certainly smell. That’s what my memory of this is going to be — the smell,” he said. “The smell of the dead mice in and around the house and the farm.”

While the health impact on humans has not been severe, there has been at least one report of the rare mouse-related illness lymphocytic choriomeningitis.

And at least three people have been bitten by mice in New South Wales hospitals while they were admitted for non-mice-related issues.

A spokesperson for the state government health department NSW Health said these bites were “minor” and “appropriate treatment has been provided.”

The spokesperson added, “The current mouse infestation across western NSW is a natural occurrence.”

Henry said the outbreak, which is of the non-native house mouse, is “monumental” and continues to have severe economic and social effects.

“Some farmers are giving up on summer crops … because the mice have damaged them so severely, so that’s essentially a total crop loss,” he said. “And in some scenarios where farmers have managed to get the crops through to harvest, they’ve had it rejected because it’s full of mouse poo.”

But he said mice plagues can come around every five to 10 years in Australia due to a combination of factors.

“We’ve had a run of dry years and [now] the drought has essentially broken, so the mice get switched on to that change in environmental conditions, and they start to breed,” he said. “The farmers have had a good crop and that puts a lot of food into the system. So you’ve got favorable climatic conditions, favorable food in the system, lots of good shelter, lots of moisture.”

And he said mice are prolific breeders, as they can “start to breed when they are 6 weeks old, and then they can have a litter of six to 10 pups every 19 to 21 days after that.”

But Henry said a mice plague typically ends abruptly with “a population crash,” although it is difficult to predict when this will occur.

Farmers in plague-hit areas are now looking toward the winter crops, which in this part of the Southern Hemisphere are typically sown in April and May.

The industry group NSW Farmers has “grave concerns” that some farms will lose all the planted seed to the mice.

NSW Farmers President James Jackson said there needs to be urgent action from the state government, including emergency permission to use the pesticide zinc phosphide and financial assistance through a small grants program.

“Mouse control is very costly. The severity of the current plague has resulted in the need for multiple aerial and ground bait applications in cropping regions … Action is needed now,” he said.

According to the group, heavy rainfall over recent days has curbed mice numbers in some areas, but they are still “rampant” in the central west and northwest of NSW.

“I am hearing the rain has pushed more of them into houses and vehicles,” the group’s spokesperson, Michael Burt, said.

For now, Australians like Roth are left hoping the plague comes to a quick end.

“Everyone’s tolerating it, but we’ve really had enough,” he said.

Nick Baker is a freelance journalist based in Sydney, Australia.