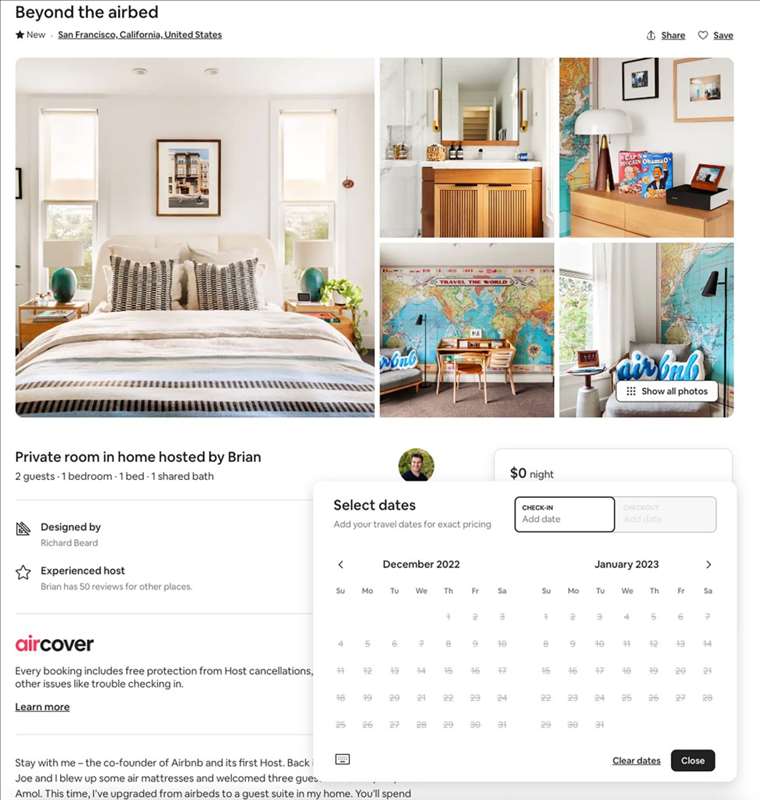 Airbnb’s co-founder Brian Chesky has opened up his San Francisco home allowing guests to stay in a private room boasting “panoramic views” – but the only problem is, there’s no available dates.

“Stay with me – the co-founder of Airbnb and its first host. Back in the day, my roommate Joe and I blew up some air mattresses and welcomed three guests – Michael, Kat and Amol,” he wrote in the listing.

“This time, I’ve upgraded from airbeds to a guest suite in my home. You’ll spend time with me and Sophie, my golden retriever, as I share stories from the early days – or you can relax in your suite, decorated with some of my favorite pieces of Airbnb history.”

He said guests will have access to a full bathroom with a large shower and can also use the “spacious chef’s kitchen” or hang out in the “sunny living room with floor-to-ceiling windows”.

However, he has since been mocked over the publicity stunt as many have discovered that there are no available dates until October 2024, when the stay period ends.

“Another PR stunt Brian, no availability in a zero price tag. You yet again delivered something unattainable,” one annoyed Twitter user wrote.

But the 41-year-old was quick to shut down the comments explaining on his Instagram he had “some weekends in January, February and March, but they booked out even before I posted this”.

“[But] I’ll keep adding weekends throughout the year,” he said.

While some branded the listing as “incredible” thanking for opening up his home to strangers, others were annoyed they missed out as available slots appeared to have been booked.

“Sounds great but there’s no availability for the entire 2023 and beyond by the looks??” one person Tweeted, to which Mr. Chesky assured he will “add some more weekends soon”.

Some people are so eager to stay at the tech billionaire’s property, they’re even willing to buy it.

“Anyone who got a slot willing to sell?” one person asked.

Mr. Chesky explained that when guests arrive at his San Francisco property they will be treated to “Chesky Chip Cookies” on arrival.

“You’ll be served six cups of coffee before noon (just like me),” he tweeted.

“We will work out together and train until total muscle failure (after we’ve eaten lots of cookies),” he added alongside a snap of a gym.

He explained his home is located near the Mission, Castro and Noe Valley neighborhoods with “plenty of great boutiques, restaurants and coffee shops”.

“You’ll be just a short walk from beautiful Dolores Park, Bi-Rite ice cream and the world-famous Tartine bakery for fresh bread and pastries. Also, guests must love dogs. Or at least Sophie.”

Meanwhile, even hip hop mogul and sneaker connoisseur DJ Khaled will open the doors to a recreation of his iconic, viral sneaker closet for just $10.62 a night.

He said guests will be able to sleep in his “legendary” sneaker collection.

“During the stay, guests will have the chance to live and breathe Miami the same way I do – epically. I’m rolling out all the big stops, including an exclusive pair of We The Best Air Jordan 5s, a handwritten welcome note from me upon arrival and the keys to the ultimate sneaker kingdom, sleeping amid some of my most prized kicks.”

Both listings come as part of the company’s winter promotions after it revealed on Wednesday it recorded a “disproportionate” 31 percent rise in single-room listings in the third quarter, as more people sought extra income in the face of a cost-of-living crisis.

According to Reuters, the company said property listings rose across regions, without disclosing specific numbers, and to aid the growth, it unveiled an app update on Wednesday to make the process easier.

“We have seen a lot of people being more interested than even before in hosting to defray their cost of living,” Mr. Chesky said, as high inflation due to the Ukraine war puts fragile household budgets under pressure.

Reuters reported about 46 percent of hosts on Airbnb said they used the extra money from renting out properties to pay for food and other items, while one in 10 said it helped them avoid eviction or foreclosure, Airbnb said, citing a survey.

Some popular tourist destinations have, however, blamed the company for aggravating housing shortages, as landlords increasingly rent out properties to holiday-makers amid a surge in travel, rather than going for long-term tenants. Airbnb co-founder Nathan Blecharczyk, in an interview with Reuters, blamed rising interest rates for creating a shortage of new homes, adding it has also been tough for the industry to adapt to buyers increasingly looking for homes outside big cities.

Meanwhile, the company said longer guest stays due to remote working will continue to boost results, as travel demand shows no signs of easing despite economic headwinds.