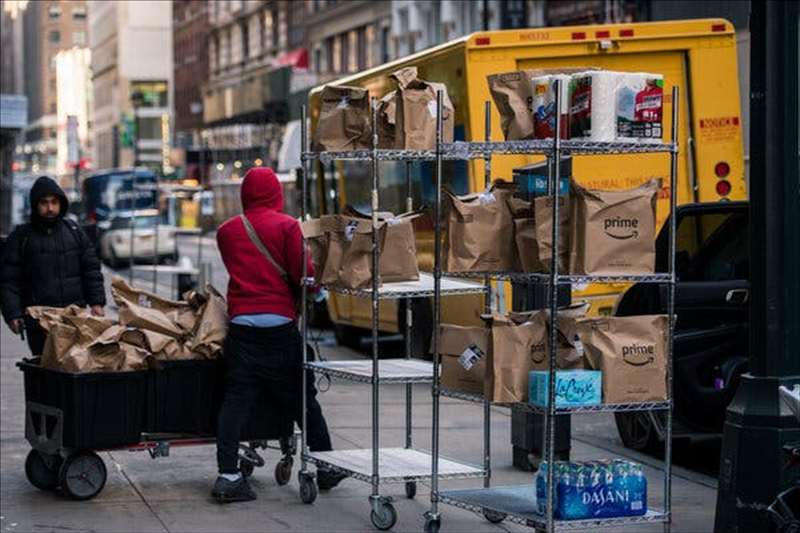 The e-commerce giant added at least nine new warehouses in the city over the past year as 2.4 million packages a day strained the nation’s largest urban delivery system.

When the pandemic gripped New York City, it propelled an enormous surge in online shopping that has not waned, even in a metropolis where stores are rarely far away. People who regularly bought online are now buying more, while those who started ordering to avoid exposure to the virus have been won over by the advantages.

The abrupt shift in shopping patterns has made New York a high-stakes testing ground for urban deliveries, with its sheer density both a draw and a logistical nightmare.

It has also highlighted the need for an unglamorous yet critical piece of the e-commerce infrastructure: warehouse space to store and sort packages and satisfy customer expectations for faster and faster delivery.

Amazon has spent the pandemic embarking on a warehouse shopping spree in New York, significantly expanding its footprint in the biggest and most lucrative market in the country.

It has snatched up at least nine new warehouses in the city, including a 1 million-plus square foot behemoth rising in Queens that will be its largest in New York, and today has at least 12 warehouses in the five boroughs. And it has added to its roster more than two dozen warehouses in suburbs surrounding the city.

No other large competitor has a single warehouse in the city and Amazon has largely left most of its chief rivals, like Wal-Mart and Target, behind.

“Amazon had people making deals,” said Adam Gordon, whose real estate firm Wildflower owns several warehouses in the city. “And they were outcompeting.”

While New York’s narrow streets, chronic traffic jams and brutal lack of parking are all formidable challenges, the city also has a severe shortage of warehouses just when they are most needed to properly grease an efficient delivery system.

New York has about 128 million square feet of industrial space, far less than many smaller cities. Indianapolis, whose population is just one-tenth that of New York’s, has nearly double the space. Chicago is the nation’s leader with more than 1.2 billion square feet.

Many packages come to New York from New Jersey and Pennsylvania, where there is room to build bigger and cheaper warehouses. And in the past year Amazon has added 14 new warehouses in New Jersey and on Long Island, totaling more than 7 million square feet.

“We are excited to continue to invest in the state of New York by adding new delivery stations,” said Deborah Bass, an Amazon spokeswoman, adding that the company’s goal was to “become part of the fabric of New York City by embracing the people, the needs, and the spirit of the community.”

Amazon’s rapid expansion in New York has also drawn more scrutiny to the treatment of its workers, an issue that the company has faced in other parts of the country. Amazon has sought to quash efforts by warehouse employees to form unions — including on Staten Island — and a high-profile battle is currently being waged in Alabama.

An Amazon spokeswoman disputed the allegations and said the company cared “deeply about the health and safety” of its workers.

But New York remains an alluring prize, and Amazon’s string of warehouses in the city puts it in a strong position to benefit from the huge spike in online shopping set off by the pandemic.

Roughly 2.4 million packages are delivered in the city every day, nearly half a million more than before the pandemic, and city data shows that 80 percent of deliveries are to residential customers, compared with 40 percent before the outbreak.

The torrent of e-commerce crosses all categories: daily grocery deliveries have more than doubled, restaurant and prepared food deliveries have increased by 12 percent and household goods deliveries have jumped by 24 percent, according to an analysis by José Holguín-Veras and Cara Wang, professors at Rensselaer Polytechnic Institute who work on transportation issues.

“The challenge now is urban deliveries,” Mr. Holguín-Veras said. “And if you look at the numbers, they are only going to increase.”

While there will likely be some decline in orders as the outbreak eases, the overall trajectory is clear, experts say.

“The pandemic has accelerated the adoption of e-commerce by five years in one year because users have been forced to adapt,” said Marc Palazzolo, a transportation consultant for Kearny, a consulting firm that has advised the city’s business leaders on e-commerce.

By 2045, the total volume of freight moving through New York City is expected to hit 540 million tons a year, up from 365 million tons today, according to city data.

Still, the online shopping boom will only worsen problems like congestion and pollution that were already bad before the pandemic, sending flotillas of delivery trucks across the city and flooding sidewalks and lobbies with packages.

It has come during a perilous period for New York’s small businesses, which have been battered by the pandemic with nearly 3,000 having closed for good as of last August, according to the most recent data available from the city comptroller’s office.

Small businesses struggle to compete online with retailers that typically charge less for the same items and have a far more robust delivery infrastructure.

“Building e-commerce capabilities isn’t easy,’’ said Jonathan Bowles, executive director of the Center for an Urban Future, a research organization. “It requires a lot more than just having a website.’’

For larger retailers, having warehouses closer to consumers will become more crucial in an increasingly competitive online market.

But the city, once a manufacturing center filled with factories, is not particularly welcoming. To try to protect residential neighborhoods from pollution and traffic, zoning rules limit the construction of warehouses to designated manufacturing districts.

Construction is underway or about to begin on new factories that will have roughly 8.7 million square feet of space in all, including a 1.2 million square-foot UPS site in Red Hook, Brooklyn.

Three warehouses under construction will have multiple levels, which is common in Asia, and multiple loading docks that can be used by one company or divided among several. Amazon has signed leases at two of them.

The opening of warehouses has brought some economic benefits, leading to the hiring of thousands of workers — some part-time jobs start at $17.25 an hour — at a time when many city residents are jobless.

Mr. Cepeda is creating a homegrown distribution system of “mini-warehouses.” He has recruited more than 1,000 residents in Manhattan and Brooklyn who will get paid to use their apartments to store goods for retailers and send them out for delivery.

Target, which started same-day delivery in the city in 2017 and has about two dozen stores in New York, has used its stores as mini-distribution hubs, in part because it is cheaper to fulfill an online order in a store than at an out-of-town warehouse.

Many smaller companies are feeling the pressure to expand their online and delivery operations.

Stop & Shop has hired hundreds of workers to increase its online grocery service in the New York area, including at a warehouse in nearby Jersey City.

Pat LaFrieda Meat Purveyors, the butcher for many high-end restaurants, has spent more than $1 million on its online and retail sales operations, selling to shoppers on its website and through Amazon Fresh and ShopRite. That business made up as much as 90 percent of the company’s sales in 2020, up from 15 percent before the pandemic.

“Home delivery will be prominent for the next decade,” Mr. LaFrieda said. “It will be key to our success.”

The company has reconfigured its New Jersey warehouse to prioritize retail sales and designed new packaging for online customers.

While Amazon is laying the foundation for online dominance in New York, Mr. Gordon, the owner of several warehouses, said other retailers would also need to become more nimble to respond to the new ways people are buying. The e-commerce demands also place added pressure on warehouse workers and drivers to fulfill and deliver orders on time, as customers now expect.

“Just-in-time delivery and last-mile delivery is what it means,’’ Mr. Gordon said. “You need to be very close to your customer to provide the level of service that people now expect.”