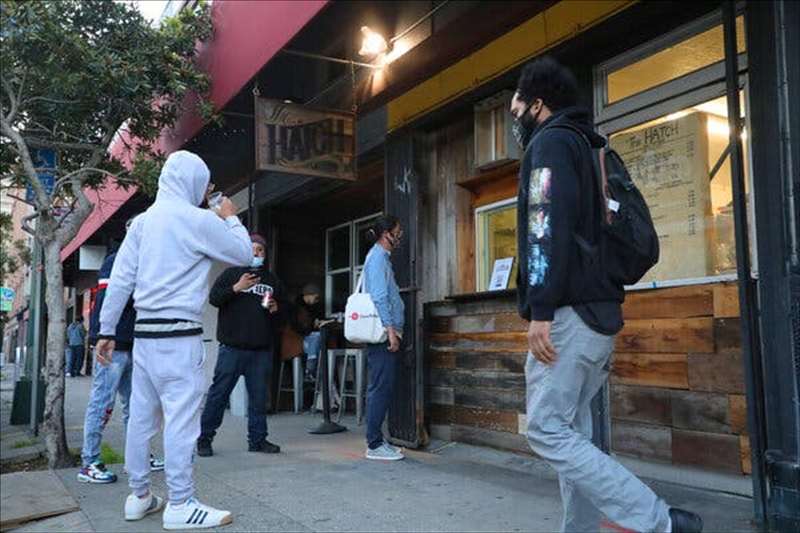 The Times followed the Hatch and its staff in Oakland after the pandemic began. The business not only survived, it’s expanding.

So began an arduous year. The coronavirus killed more than 500,000 people in the United States and forced more than 100,000 small businesses to close for good. At the Hatch, some of the staff fought for the bar’s survival. Others just tried to survive.

He is happy he was wrong. On a recent Saturday, a masked bartender handed beer and tater tots out of a takeout window cut into the kitchen wall. Groups gathered around picnic tables on a patio that was previously a lane of traffic. A D.J. broadcast hip-hop onto the sidewalk. And a man on roller skates bounced to the music, drink in hand.

The Hatch is alive, albeit as a different place. It is one of hundreds of thousands of bars and restaurants that have scraped by over the past year, finding ways to survive. Many have relied on government aid and donations, and nearly all of them have had to be creative and adapt.

At the Hatch, Mr. Kachingwe used ingenuity and a bit of good fortune to take advantage of federal money and discounted leases to not only hold on but expand.

Mr. Kachingwe said he had tried to reassure his employees for months that his plans just needed time to work. “Now we’re finally getting there,” he said. “That seems to be a big turning point for the entire staff, going from being depressed by the pandemic to being like, ‘OK, maybe things will turn around.’”

Santos, one of the Hatch’s two cooks, who asked to be identified only by his first name because of his family’s immigration status, has been stuck for months in his three-bedroom home, which he shared with 11 relatives on the outskirts of Oakland. He had complications after hernia surgery in June, and hasn’t worked since. The Hatch’s new takeout business was so slow, he also wasn’t needed.

In December, Santos’s daughter moved out with her four children, leaving fewer people to split the nearly $3,000 monthly rent. That was particularly difficult without the $2,500 he used to take home each month from the Hatch. To get by, he and his children who still lived with him borrowed money from relatives and frequented food banks. He received a visa in 2019 after arriving in the United States a decade earlier from Guatemala, but he hasn’t received any unemployment or stimulus checks.

“I need to work,” he said in Spanish. “For everything — the rent, other needs, the family in Guatemala.”

There is good news. A second surgery has eased the pain from the first, and Santos is scheduled to return to the Hatch’s cramped kitchen this week.

Maria, the bar’s undocumented cleaner, is not set to return. (The Times also agreed to not use her full name because of her immigration status.) She is undergoing chemotherapy for multiple myeloma, a cancer of the plasma cells in her bone marrow. Her health declined sharply after the lockdowns began, and by May she could hardly walk. But since she began treatment, she said, she has slowly improved and is getting around with a walker. With her out of work, Mr. Kachingwe hired her husband to clean some days.

“Thanks to God and the people who, without knowing me, have helped me,” Maria said in Spanish. “Without that help, we wouldn’t have survived.”

Mr. Kachingwe said the donations, as well as the $145,000 in federal money, had helped him change the business. He lobbied city officials to close down a lane of traffic and then twice built a patio in its place. (Days of rain ruined the first patio.) He and staff built the takeout window, rewrote the menu, moved a projector and screen outside, and bought an outdoor sound system off Craigslist.

He said the Hatch was now better suited for a post-pandemic world, with more outdoor space and a takeout operation. It also suddenly has a few sister businesses.

Ms. Easterbrook, the Hatch’s manager, had been planning to open a sister bar called Good for Nothing, but she quickly ditched the plan when the pandemic arrived. Then, in a late-night conversation while waiting for takeout orders at the Hatch, Ms. Easterbrook, a trained florist, and Mr. Kachingwe came up with the idea for Pothead. To them, the concept made sense: There was still demand for flowers and plants, the Hatch’s new outdoor space could attract customers, and they could use the bar’s liquor license to sell wine.

Ms. Easterbrook said the first weeks had been a success, though Mr. Kachingwe still had plenty to learn. “In the beginning he asked me things like, ‘Should I get more sand for the flowers?’” she said.

Mr. Kachingwe teamed up with the Hatch’s cook, Leonardo Garcia, to make and bottle sauces, including Hatch Fire Ketchup and Hatch Fuego. And he worked with Giacchino Breen, a 23-year-old bartender, on bottling cocktails under a new brand, Wolfmoon. As part of Mr. Kachingwe’s effort to empower his employees, Mr. Garcia and Mr. Breen have stakes in the sales.

Now, after a year in which he worried the Hatch would never fully open again, Mr. Kachingwe said his biggest anxiety was welcoming customers back inside. He is trying to figure out how to make the sound system cover both the indoor and outdoor spaces and whether to have indoor customers order food at the outdoor window. Until they receive a vaccine, some on the staff are also uncomfortable with customers returning inside the compact bar.

In fact, Mr. Kachingwe said, he prefers the new Hatch to what it was before the pandemic. With the outdoor seating, “it’s more lively,” he said. “I don’t see things going back to the way they were.”