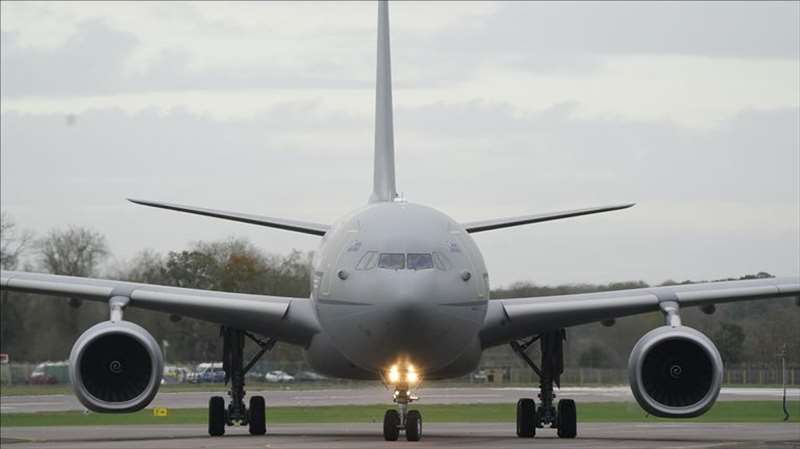 It is hoped their usage will propel the RAF closer to its net zero target by 2040, while reducing its reliance on global supply chains.

The RAF Voyager – the military equivalent of an Airbus A330 – has taken to the skies over Oxfordshire using waste-based fuels, including used cooking oil.

Sustainable aviation fuels, known as SAFs, have the potential to reduce carbon emissions by up to 80%, according to the RAF.

As well as being a UK first, the voyage was also the first in the world to use fully sustainable fuel for a military aircraft of its size.

Defence minister Baroness Goldie described it as “a breakthrough moment” for the RAF.

She said: “Through the RAF’s pioneering spirit, expertise and partnership with UK industry, British science and engineering is leading the way in improving operational resilience and developing future operating capability in a climate-changed world.

‘No drop in standards’ amid diversity row, head of RAF says

“They should be rightly proud of this achievement – it is a breakthrough moment for the RAF and an exciting development for the Ministry of Defence (MoD).”

Flight lieutenant Nick Dehnel, from the RAF, worked with Carlos M San Millan and Pedro Martin, both from Airbus, to engineer the feat.

It followed the world’s first successful flight of a small aircraft powered by synthetic fuel, which completed a 90-minute journey from RAF Brize Norton last November.

Synthetic fuel is made from water and carbon dioxide, which is put under pressure and has an electric current run through it.

Aviation minister at the Department for Transport (DfT), Baroness Vere, said the success of the test flights were a “win for the planet and a testament to British ingenuity”.

She added the DfT had launched a £165m fund aimed at boosting the sustainable fuel industry on its journey towards the first net zero transatlantic flight next year.