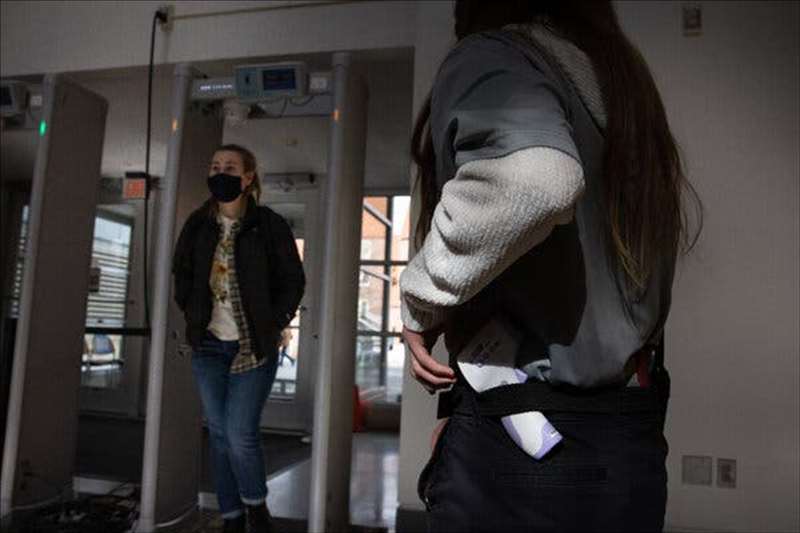 Many schools that use fever scanners and symptom checkers have not rigorously studied if the technology has slowed the spread of Covid-19 on campuses.

Before the University of Idaho welcomed students back to campus last fall, it made a big bet on new virus-screening technology.

The university spent $90,000 installing temperature-scanning stations, which look like airport metal detectors, in front of its dining and athletic facilities in Moscow, Idaho. When the system clocks a student walking through with an unusually high temperature, the student is asked to leave and go get tested for Covid-19.

But so far the fever scanners, which detect skin temperature, have caught fewer than 10 people out of the 9,000 students living on or near campus. Even then, university administrators could not say whether the technology had been effective because they have not tracked students flagged with fevers to see if they went on to get tested for the virus.

The schools have a hard time saying whether — or how well — the new devices have worked. Many universities and colleges, including prominent research institutions, are not rigorously studying effectiveness.

“So why are we bothering?” said Bruce Schneier, a prominent security technologist who has described such screening systems as “security theater” — that is, tools that make people feel better without actually improving their safety. “Why spend the money?”

Administrators at Idaho and other universities said their schools were using the new tech, along with policies like social distancing, as part of larger campus efforts to hinder the virus. Some said it was important for their schools to deploy the screening tools even if they were only moderately useful. At the very least, they said, using services like daily symptom-checking apps may reassure students and remind them to be vigilant about other measures, like mask wearing.

Some public health experts said it was understandable that colleges had not methodically assessed the technology’s effectiveness against the coronavirus. After all, they said, schools are unaccustomed to frequently screening their entire campus populations for new infectious diseases.

Even so, some experts said they were troubled that universities lacked important information that might help them make more evidence-based decisions on health screening.

Other medical experts said increased surveillance of largely healthy college students seemed unduly intrusive, given that symptom checkers have limited usefulness and the effectiveness of wearable health monitors against Covid-19 is not yet known.

But how effective it has been at hindering coronavirus outbreaks on campus is unknown. A spokesman for the University of Missouri said the school was unable to provide usage data on CampusClear — including the number of students who had reported possible symptoms through the app and later tested positive for the virus — requested by a Times reporter.

Jason Fife, the marketing director at Ivy.ai, the start-up behind CampusClear, said nearly 425,000 people at about 120 colleges and universities used the app last semester, generating about 9.8 million user reports. Many schools, he noted, use data from the app not to follow individual virus cases but to look for symptom trends on their campuses.

Ivy.ai, however, cannot gauge the app’s effectiveness as a virus-screening tool, he said. For privacy reasons, the company does not track individual users who report symptoms and later test positive for the infection.

At some universities, administrators acknowledged that the tech they adopted this school year did not pan out the way they had hoped.

By the end of the semester, however, only about one-third of the 1,200 students on campus were scanning the bar codes. Ethan Child, a Bridgewater senior, said he had scanned the QR codes but also skipped them when walking by in the rain.

“I think it’s reasonable to ask students to do it — whether or not they’ll actually do it is another thing,” he said. “People might just pass it by.”

Administrators discovered that the key to hindering coronavirus outbreaks was not technology but simply frequent testing — once a week, for on-campus students — along with contact tracing, said Chris Frazer, the executive director of the university’s wellness center.

“I’m glad we didn’t spend an exorbitant amount of money” on tech tools, Dr. Frazer said. “We found what we need is tests and more tests.”

The location-tracking tools ultimately proved most useful for “peace of mind,” he added, and to confirm the findings of contact tracers, who often learned much more about infected students’ activities by calling them than by examining their location logs.

Other schools that discovered location tracking was not a useful pandemic safety tool decided not to deploy it at all.

At Oklahoma State University, in Stillwater, administrators said they had planned to log students’ locations when they used campus Wi-Fi for possible later use in contact tracing. But the school never introduced the system, said Chris Barlow, the school’s health services director, partly because administrators realized that many students had contracted the virus off campus, in situations where public health measures like mask wearing were not followed.

At the University of Idaho and other schools, administrators described devices like fever scanners as add-ons to larger campus safety efforts involving student testing and measures like social distancing.

“We got out in front of it early,” C. Scott Green, the president of the University of Idaho, said. “We were able to isolate those that were sick, and we got back under control.”

Still, there were hiccups. The university required food service employees who worked at the dining hall to undergo temperature checks using hand-held scanners. But several developed virus infections anyway, and the university was forced to temporarily close the dining hall over a weekend for deep cleaning.

As for the free-standing temperature-scanning stations, Mr. Green himself has experienced their limitations. He said one mistakenly stopped him from entering an athletic building right after he got out of a hot car.