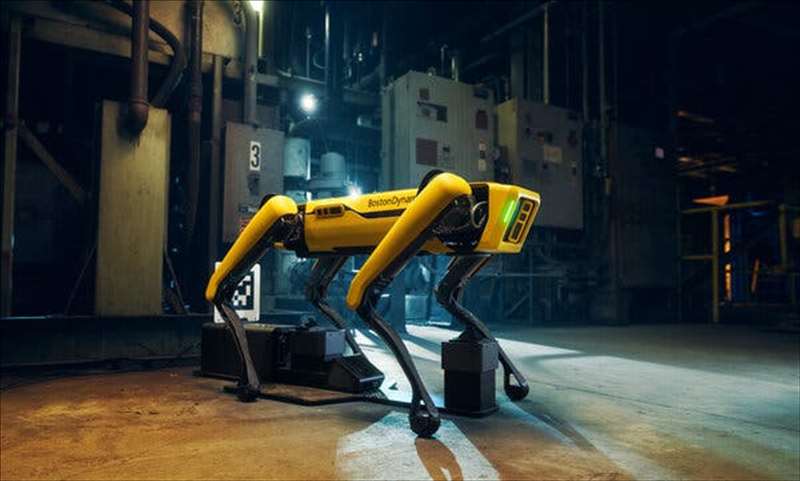 The New York Police Department has been testing Digidog, which it says can be deployed in dangerous situations and keep officers safer, but some fear it could become an aggressive surveillance tool.

Two men were being held hostage in a Bronx apartment. They had been threatened at gunpoint, tied up and tortured for hours by two other men who pretended to be plumbers to get inside, the police said.

One of the victims managed to escape and called the police, who showed up early Tuesday morning at the apartment on East 227th Street, unsure if the armed men were still inside.

The police decided it was time to deploy Digidog, a 70-pound robotic dog with a loping gait, cameras and lights affixed to its frame, and a two-way communication system that allows the officer maneuvering it remotely to see and hear what is happening.

In the case of the Bronx home invasion, the police said that Digidog helped the officers determine that there was no one inside. The police said they were still searching for the two men, who stole a cellphone and $2,000 in cash and used a hot iron to burn one of the victims.

The act requires the Police Department to be more transparent about its surveillance and technology tools, including Digidog, something civil libertarians said had been lacking.

Jay Stanley, a senior policy analyst with the American Civil Liberties Union, said empowering a robot to do police work could have implications for bias, mobile surveillance, hacking and privacy. There is also concern that the robot could be paired with other technology and be weaponized.

“We do see a lot of police departments adopting powerful new surveillance and other technology without telling, let alone asking, the communities they serve,” he said. “So openness and transparency is key.”

The New York Police Department did not respond to requests for comment about the civil liberty concerns.

A mobile device that can gather intelligence about a volatile situation remotely has “tremendous potential” to limit injuries and fatalities, said Keith Taylor, a former SWAT team sergeant at the Police Department who teaches at John Jay College of Criminal Justice.

“It’s important to question police authority, however this appears to be pretty straightforward,” he said. “It is designed to help law enforcement get the information they need without having a deadly firefight, for instance.”

The company, which calls the robot dog Spot, began selling it last June. Most of the buyers have been utility and energy companies, as well as manufacturers and construction companies, which use it to get into spaces too dangerous for humans, said Michael Perry, vice president of business development at the company.

The robot has been used to inspect sites with hazardous material. Early in the pandemic, it was used by health care workers to communicate with potentially sick patients at hospital triage sites, Mr. Perry said.

Most of the companies rename the robot after they buy it, giving it names like Bolt and Mac and Cheese, he said.

The Massachusetts State Police and the Honolulu Police Department are also using it. Other police departments have called the company to learn more about the robot, which has a starting price of about $74,000 and may cost more with extra features, Mr. Perry said.

The robotic dog, which has a 90-minute battery life and walks at a speed of three miles per hour, was not designed to act as a covert tool of mass surveillance, Mr. Perry said.

“It’s noisy and has flashing lights,” he said. “It’s not something that is discreet.”

The use of robots that can be deployed into dangerous situations to keep police officers out of harm’s way could become the norm.

In 2015, a man with a knife who threatened to jump off a bridge in San Jose, Calif., was taken into custody after the police had a robot bring him a cellphone and a pizza.

The year before that, the Albuquerque police used a robot to “deploy chemical munitions” in a motel room where a man had barricaded himself with a gun, a department report said. He surrendered.