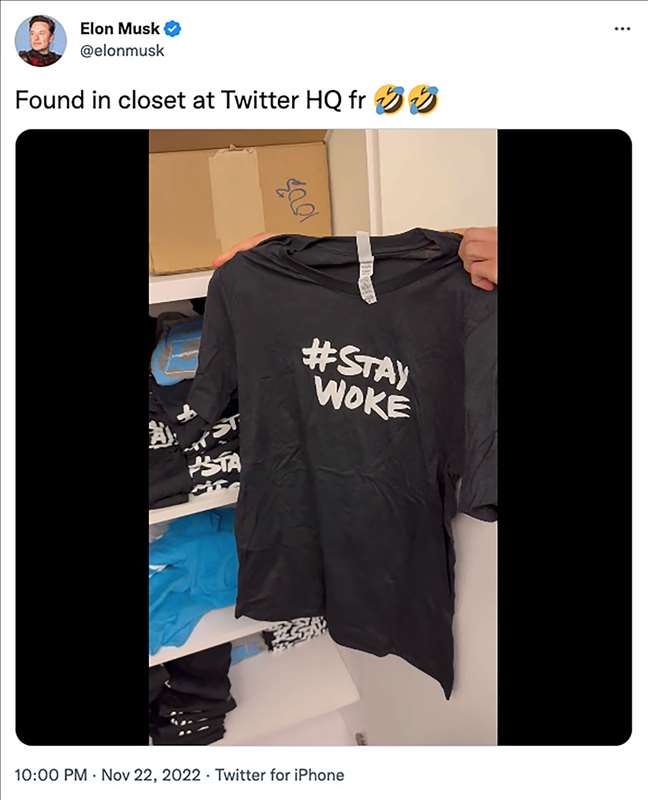 “Found in closet at Twitter HQ fr,” he captioned the clip, adding two laughing emojis to the message in which “fr” is short for “for real.”

“Here we are, at the merch thing, and there’s an entire, entire closet full of hashtag woke T-shirts,” Musk says over his laughing pal, who calls it a “secret closet.”

“But I won’t because I won’t send my hard earned $$ to a company run by a guy who disparages people who care about other people,” the follower complained.

“We worked hard on that merch and I’d rather distribute it myself than to know it is in a garbage can,” tweeted the former live event programming associate producer for Twitter.

Musk further enraged followers with a since-deleted tweet in which he revealed that the shirts he was laughing at “stem from the Ferguson protests” over the 2014 Missouri police shooting of 18-year-old Michael Brown.

“‘Hands up don’t shoot’ was made up,” he said of the rallying cry by protesters who claimed the teen had his hands up in surrender when he was fatally shot.