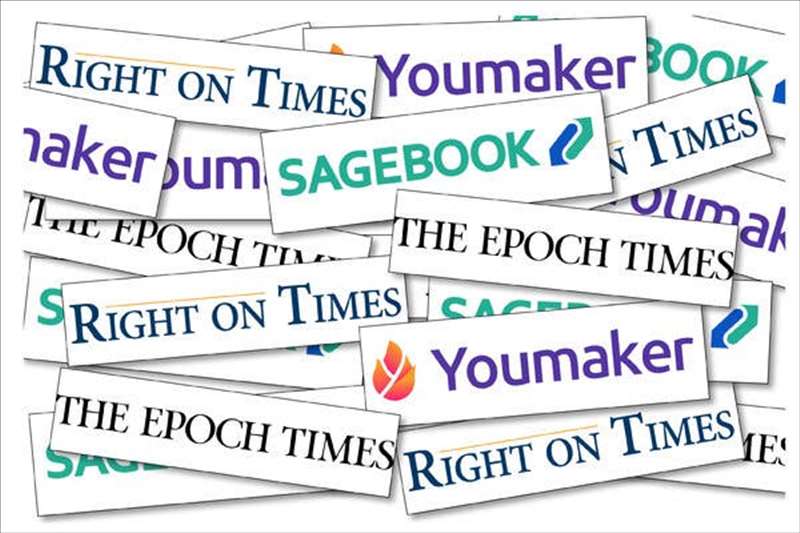 The company’s ties to more than a dozen sites illustrate how conservative media companies are branching out after Facebook and Twitter began stiffer policing of false information.

Youmaker, a little-known video site, prominently featured a video alleging that a far-left extremist movement was plotting to destroy America.

On Sagebook, a Twitter-like social network filled with posts from right-leaning users, a sidebar of trending topics contained the hashtags for “Stop the Steal,” “Censorship” and “Facebook.”

Youmaker hosts the videos on The Epoch Times website. Sagebook was recently used to run the The Epoch Times’ comments system. When Right on Times launched a few months ago, numerous Epoch employees promoted the site on their social media feeds, and Right on Times ran many articles from Epoch properties. Researchers found that the other sites have digital fingerprints, like advertising identification tags, that match those used by Epoch Media properties.

The websites illustrate how conservative media organizations that spread misleading information, facing crackdowns by the largest social networks, are casting a wider net to reach online audiences. Epoch Media, which is affiliated with the Chinese spiritual movement Falun Gong, regularly publishes anti-Chinese Communist Party content as well as conspiracy theory-laden articles about QAnon and unfounded allegations of widespread voter fraud in the 2020 election.

Epoch Media appears to be “anticipating a move by the bigger companies to push them off the more mainstream platforms,” said Joan Donovan, the research director of Harvard University’s Shorenstein Center on Media, Politics and Public Policy.

The ownership of the websites is unclear. At least one, Youmaker, discloses a video partnership with the Epoch Media Group. Many others do not disclose any ties with Epoch. The Global Disinformation Index, a nonprofit research group, found the ties among the sites by analyzing their hosting records, website analytics and advertiser identifiers.

Right on Times does not disclose any partnership with Epoch, nor do the two websites share a unique digital identifier. But when it launched in October, its articles were posted on social media by Epoch employees. Right on Times also had a prominent ad campaign on Epoch properties, and it included many articles from Epoch properties on its service. Those actions led disinformation researchers, including those at the Global Disinformation Index, to conclude there was coordination.

Epoch Times said that Right on Times was one of its advertisers, and that Youmaker was an “independent business partner.” Sagebook, the company said, was being phased out. (The Sagebook site was no longer accessible as of last week.)

“The premise of your article is incorrect,” the company said in an email. “The Epoch Times does not deal in conspiracy theories. We pride ourselves on rigorous, fact-based reporting, which has attracted a large and rapidly growing audience.”

“We have clarified repeatedly that The Epoch Times has no relationship with The BL and Truth Media,” Epoch Media said.

Epoch began to make use of the alternative social media platforms, like Sagebook and Youmaker, in late 2020. Youmaker draws about 1.5 million unique visitors per month, according to data from the website analytics company SimilarWeb. Sagebook attracted 38,000 monthly visitors and Right on Times sees 15,000, according to SimilarWeb data.

While small, the audience has grown quickly. Compared with last November, in January Youmaker’s traffic had increased by 42 percent, Sagebook’s increased by nearly 300 percent, and Right on Times’ traffic had jumped 715 percent, according to SimilarWeb data.

Much of the content on the sites is shared from The Epoch Times. For months, the websites have pushed stories and videos amplifying unfounded allegations of mass voter fraud.

On Sagebook, a stream of stories favorable to Mr. Trump and denouncing President Biden dominated the social network at the beginning of the year. “#StopTheSteal. This election isn’t over,” read one post on Sagebook.

“Anti CCP caravan at the Million MAGA March in Washington D.C. #TAKEDOWNTHECCP #stopthesteal #ChinaJoe,” said another post. It included a picture of a car with a sign stuck to its roof that read: “CCP spread Covid-19. Say no to communism.”

After the inauguration of President Biden on Jan. 20, the websites switched their focus to publishing articles that criticized Mr. Biden and his administration.

“In major speech, Biden reveals his deep misunderstanding of foreign policy,” said a headline collected by the news aggregator Right on Times. Another aggregated article highlighted comments from Mike Pompeo, the former secretary of state, in which he criticized Mr. Biden’s policy shift toward China as “disheartening.”

“There are only a few people in this world, and few entities or organizations in this world, that could potentially build the infrastructure that would rival the big mainstream social platforms,” Dr. Donovan, the disinformation researcher, said.

“It’s critical that we keep an eye on these cloaked infrastructures to make sure it’s clear who owns them, how they are managed and how they play into the rest of our information ecosystem,” she added.

The tech companies said they enforced their policies against Epoch Media properties on their platforms as needed. The social networks have a history of removing posts and links that have ties to accounts and publications that it has banned in the past. They say they will continue to be on the lookout for spam or coordinated inauthentic behavior from the new sites.

“We’ve taken enforcement actions against Epoch Media and related groups several times,” a Facebook spokesman, Andy Stone, said in a statement. “If we discover that Epoch is engaging in deceptive actions in the future we will enforce against them.”