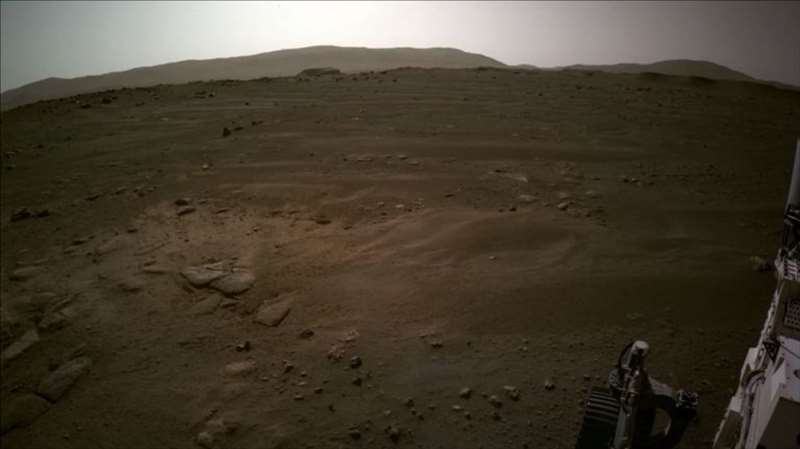 The £1.9bn effort has already achieved more than most, given how approximately half of all mankind’s missions to Mars have failed.

NASA has released new pictures captured by the Perseverance rover after its dramatic touchdown on Mars.

Sharing the never-before-seen photos and footage, an engineer said: “This really is the surface of an alien world – and we’ve just arrived.”

The never-before-seen photos and footage comes days after the US space agency shared colour pictures of the robot’s landing – breathtaking images that will go down in history with the likes of Neil Armstrong and Buzz Aldrin on the moon.

Last Thursday’s touchdown was the culmination of a seven-month journey through space and a “perilous” seven minutes where controllers looked on as the rover entered Mars’ atmosphere at 12,100mph and hurtled towards the ground.

It took 11 minutes for news of the safe landing to reach the control room in Pasadena, California, as radio signals travelled 33.9 million miles to Earth at the speed of light.

NASA chose to land Perseverance near an ancient river delta and former lake known as the Jezero Crater, where it will drill deep down into the sediment of where water once flowed, collecting material that may hold signs of life.

The £1.9bn effort has already achieved much more than most, given how approximately half of all mankind’s missions to Mars have failed.

Perseverance carries more cameras with it than any other interplanetary mission in history – 19 to be exact – enabling us to appreciate the Martian landscape like never before.

The rover is also kitted out with a navigation system to help it avoid dangerous boulders and ravines, a range of scientific instruments for performing experiments, and a miniature helicopter that will become the first rotorcraft to fly on another planet.

But the carefully selected samples of rock and soil won’t be analysed immediately. Instead, they will be sealed in tubes and left in a well-identified place on the surface for a future mission to collect.