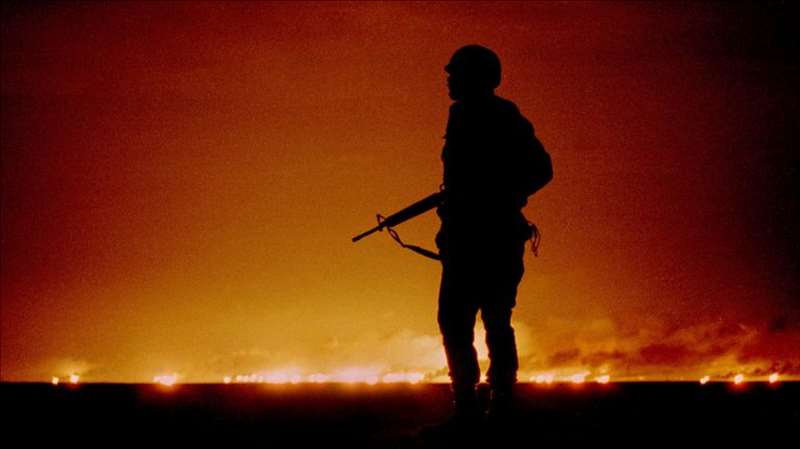 Researchers say none of those tested in the study were exposed to any significant amounts of the radioactive substance.

Gulf War syndrome, which has left a quarter of a million veterans suffering long-term illness, may have been caused by exposure to sarin nerve agent – not debris from depleted uranium munitions, a study has found.

Scientists from the University of Portsmouth believe the symptoms suffered by thousands might have been caused by the toxic gas released widely when troops destroyed caches of Iraqi chemical weapons.

The illness affects about 250,000 of the 750,000-plus service personnel from the armed forces of the UK, US and other allied nations who served in the conflict between August 1990 and February 1991.

It has caused a range of acute and chronic symptoms including fatigue, headaches, joint pain, indigestion, insomnia, dizziness, respiratory disorders and memory problems, and scientists believe it appears rooted in neurological impairment.

Researchers tested sufferers to examine levels of residual depleted uranium in their bodies and say their study “conclusively proves” that none of them were exposed to any significant amounts of the radioactive substance.

A highly sensitive method of testing in conjunction with metabolic modelling was used which took into account the predicted decline in depleted uranium from normal metabolism over the time since any potential exposure.

Professor Randall Parrish developed a method of detecting depleted uranium in urine from an exposure many years earlier and tested 154 well-monitored US Gulf War veterans who have the illness.

There was no trace of depleted uranium in any of the samples, and the testing was said to be 10 times more sensitive than previous procedures.

Prof Parrish said: “For decades, medics and scientists have been looking for the elusive cause of Gulf War illness.

“That depleted uranium is not and never was in the bodies of those who are ill at sufficient quantities to cause disease will surprise many, including sufferers who have, for 30 years, suspected depleted uranium may have contributed to their illness.”

Prof Parrish said the most likely remaining causes for the illness were low-level and widespread exposure to sarin nerve agent, possibly compounded by the use of organophosphate anti-nerve agent medication and the liberal use of pesticides to prevent malaria exposure to allied forces.

He said: “Depleted uranium munitions were used in the conflict as an effective weapon to destroy Iraqi tanks and its use has littered Iraq and Kuwait with uranium contamination, potentially affecting local people.”

Medical studies have shown it can cause cancers and birth defects and for decades it has been alleged to be a smoking gun in Gulf War illness, he said.

“The plausibility of the link between depleted uranium and the illness has bubbled along now for nearly 30 years, but we would argue it’s time to look elsewhere,” he continued.

“Finding causes is a nebulous game when you have so many options to blame. The allies’ own activities destroying an Iraqi nerve agent cache or spraying pesticides liberally on troops could be seen in hindsight as an inadvertent ‘own goal’ and one to be avoided in future conflicts.

“It is important to find causes for conditions like this, even if it takes a long time and the causes might be controversial.”

The study was carried out with Dr Robert Haley, of the University of Texas Southwestern Medical Centre in Dallas, and published in the journal Nature Scientific Reports.

The Royal British Legion said its research suggests up to 33,000 UK Gulf War veterans could be living with the syndrome, with 1,300 claiming a war pension for conditions connected to their service in the conflict.

Andy Pike, head of policy and research at the Royal British Legion said: “Whilst we welcome further research that helps to improve our knowledge of the experiences faced by Gulf War veterans, there has been little meaningful research published in the UK concerning effective treatment for those suffering from Gulf War illnesses.

“It is likely this lack of understanding has had a serious impact, leaving many veterans living with debilitating conditions 30 years after the end of combat operations.”

A Ministry of Defence spokesman said: “We are indebted to all those who served our country in the Gulf wars and have already sponsored significant research into the effects of this conflict on veterans.

“Although we have no plans to conduct further studies, we continue to monitor any Gulf War research that is published around the world.”