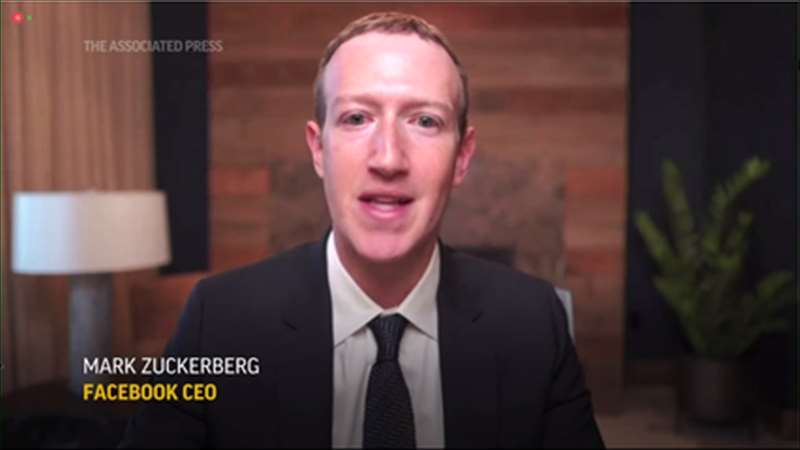 The decades-old law shields social media companies from legal liability for what their users post and gives the platforms broad immunity when moderating “objectionable” content.

Rep. Bill Johnson, a Republican from Ohio, said: “This hearing marks a new relationship between all of us today. There will be accountability.”

Angie Craig, a Democrat from Minnesota, remarked: “This panel has done something truly rare in Washington these days: It has united Democrats and Republicans. Your industry cannot be trusted to regulate itself.”

Here are some of the key moments from Thursday’s hearing:

Dorsey was the only tech CEO to acknowledge that his platform played a role in the deadly Capitol attack.

Asked by Rep. Mike Doyle, a Democrat from Pennsylvania, whether Twitter bore “some responsibility for disseminating disinformation related to the election and the Stop The Steal movement that led to the attack on the Capitol,” Dorsey responded “yes.”

“But you also have to take into consideration the broader ecosystem,” he said. “It’s not just about the technological systems that we use.”

Zuckerberg declined to answer “yes” or “no.” Later, he said those responsible were “the people who took the actions to break the law and do the insurrection and, secondarily, also the people who spread that content.”

Pichai also declined to give a “yes” or “no” response but said people at Google “always feel a deep sense of responsibility,” though “I think we worked hard this election.”

Schakowsky later asked Zuckerberg about remarks made by Facebook’s chief operating officer, Sheryl Sandberg, in a January interview with Reuters.

Sandberg said the planning for the Capitol siege was “largely organized” on other social media platforms.

“Certainly there was content on our services and, from that perspective, I think that there is further work we need to do,” Zuckerberg said, before Schakowsky cut him off.

Rep. Frank Pallone, a Democrat from New Jersey and chairman of the House, Energy and Commerce Committee, slammed the tech CEOs for dodging questions.

“You definitely give the impression that you don’t think that you’re actively in any way promoting this misinformation and extremism, and I totally disagree with that,” Pallone said. “You’re not passive bystanders.”

“We’re all aware of Big Tech’s ever-increasing censorship of conservative voices and their commitment to serve the radical progressive agenda,” said Rep. Bob Latta of Ohio, the ranking Republican of the House’s communications and technology subcommittee.

The CEOs denied any partisanship, as they have in previous hearings.

When Rep. Steve Scalise, a Republican from Louisiana, asked Dorsey about Twitter’s decision to block a New York Post article about Joe Biden’s son Hunter before the election, Dorsey said the company made a mistake. Scalise then asked if anyone in the company’s “censoring department” was held accountable.

“We don’t have a censoring department,” Dorsey replied.

Republican Rep. Jeff Duncan of South Carolina lit into the tech companies for removing former president Donald Trump but allowing “state sponsors of terror” from Iran and Syria to remain on their platforms.

“You think you are above the law,” he said, and called for an end to liability protections of Section 230.

“Section 230 provides you with the liability protection for content moderation decisions made in good faith,” Latta said. But, if the companies use that shield to moderate political viewpoints they disagree with, “I find that highly concerning,” Latta said.

Dorsey said he did not think tech companies should be the arbiters of truth.

“I don’t think the government should be either,” he said.

The committee’s top Republican, Rep. Cathy McMorris Rodgers of Washington state, told the CEOs that their platforms are her “biggest fear as a parent.”

A mom of three school-aged kids, McMorris Rodgers said she and her husband fight “the Big Tech battles in our household every day.”

Online protections for children is one of the rare bipartisan issues on Capitol Hill. Democrats and Republicans pelted the tech CEOS with questions about the harmful effects of social media on children and voiced concern over bullying, screen addiction, self-harm, suicidal thoughts, and more.

“Over 20 years ago, before we knew what Big Tech would become, Congress gave you liability protections. I want to know, why do you think you still deserve those protections today?” McMorris Rodgers said. “What will it take for your business model to stop harming children?”

Rep. Bill Johnson, a Republican from Ohio, compared the CEOs of Big Tech to Big Tobacco, “handing our children a lit cigarette and hoping they will stay hooked for life.”

“This committee is ready to regulate to protect our children from your ambition,” said Rep. Lori Trahan, a Democrat from Massachusetts.

Throughout the hearing, lawmakers demanded that the tech CEOs answer questions either “yes” or “no,” though they rarely did, instead pleading that the matters were too complex or nuanced.

Rep. Billy Long, a Republican from Missouri, finally asked if the trio understood the difference between “yes” and “no.” He later said he had a wager with someone that he could not get the CEOs to answer “yes” or “no” to a question.

Rep. Kathleen Rice asked Dorsey which answer was winning the poll. “Yes,” responded Dorsey, who had taken to favoriting commentary on the hearing on Twitter, from what questions lawmakers should be asking to why lawmakers could not pronounce Pichai’s name.

“Your multitasking skills are quite impressive,” Rice, a Democrat from New York, commented.

Zuckerberg told lawmakers that Facebook would honor the decision by its oversight board on whether to reinstate former president Donald Trump.

“We will respect the decision of the Oversight Board, and if they tell us that former President Trump’s account should be reinstated, then we will honor that,” Zuckerberg said in response to a question from Missouri’s Long.

It referred the case to its advisory board, which will make the final call on whether Trump can return to Facebook and Instagram. The decision is expected by mid-April.

Rep. G.K. Butterfield, Democrat from North Carolina, challenged the tech CEOs on statements their companies made after the police killing of George Floyd, proclaiming that Black lives matter.

In his view, Butterfield said, Facebook, Google and Twitter engaged in platitudes and “another round of passing the buck” while contributing to the spread of race-based extremism and voting suppression.

“You have talked the talk, but you failed to walk the walk,” he said.

Further, Butterfield suggested the chronic lack of diversity in staffing is a prime factor in “these failures,” with so few employees and executives of color creating social media products or making calls about what constitutes hate speech.

For years, white nationalists and extremists organized on mainstream social media platforms. Facebook angered activists and some of its own employees last year when it refused to take down a Trump post referring to law enforcement potentially shooting people protesting Floyd’s death.

“Perhaps a lack of diversity within your organizations has contributed to these values,” Butterfield said, before asking if the tech CEOs would support a law requiring all companies to publish information on the demographics of their workforces.

None of them said they would. Zuckerberg said he didn’t think so, but it would depend on the details. Dorsey said he would not oppose it, but Twitter does not always have all that data on workers. Pichai offered to share the diversity reports his company releases each year.

A familiar refrain from lawmakers during the hearing is that Facebook, Google and Twitter profit from false and misleading statements, conspiracy theories and hoaxes.

Rep. Jerry McNerney (D-Calif.) asked Zuckerberg to answer “yes” or “no” if he agrees that his company “has profited from the spread of disinformation.”

“Congressman, I do not agree with that,” Zuckerberg replied. “People do not want to see disinformation on our services and, when they do, I think it hurts our long-term business.”

McNerney retorted: “Profits are being generated from COVID-19 and vaccine disinformation, election disinformation, QAnon conspiracy theories, just to name a few things, and it’s baffling that you have a negative answer to that question.”