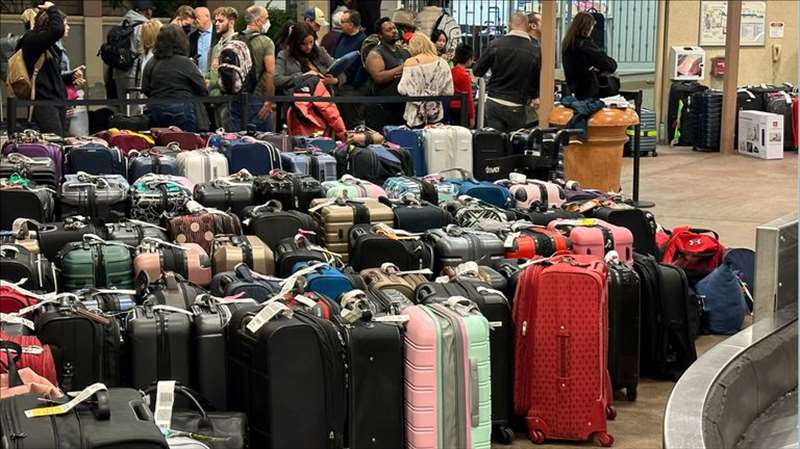 Over 20 million people have viewed Valerie Szybala’s Twitter thread since New Year’s Day – as she documented the route her luggage took before its eventual return to her – all thanks to an Apple AirTag.

The chance of your luggage going missing is among the most anxiety-inducing facets of any flight, especially one taken amid the holiday rush.

Unfortunately for Valerie Szybala, that’s precisely the scenario that she began 2023 contending with after a domestic US journey from Chicago back to her home in Washington.

In a viral Twitter thread beginning with a post that’s amassed more than 20 million views since New Year’s Day, she documented the “wild ride” her bag took on its eventual return to her – all thanks to an Apple AirTag.

Informed by airline United that her bag had not made it on to the flight to Washington, and safe in the knowledge an AirTag was attached, Ms Szybala took up the offer of having it delivered by courier.

Its apparent journey from that point on was one she could scarcely believe.

Concerned about the whereabouts of her luggage, Ms Szybala investigated an apartment complex the AirTag suggested was housing her belongings.

On 1 January, three days after the bag was said to have departed the airport, she tweeted it had been “sitting in a residential complex for over a day”.

“Out back by the dumpsters, I have found other emptied United Airlines bags,” she added.

Ms Szybala shared screenshots of a conversation she had with a support representative from the airline, who had assured her the bag was still on course for delivery.

“I am sorry, I don’t know why it is showing there,” they said of the AirTag’s assertion that it was elsewhere, even suggesting that Ms Szybala “calm down”.

AirTags are loaded with what Apple calls its U1 chip, which is essentially able to “ping” any other Apple device out in the wild to triangulate the precise location of the AirTag itself.

Because there are so many iPhones out there, this chip means the AirTag doesn’t rely on more familiar location tech like GPS.

To see where an AirTag is, users open the Find My app on an iPhone – and newer handsets can get precise on-screen, SatNav-style directions.

Misplaced AirTags can be put into a “lost mode”, which allows users to enter a custom message that displays on someone’s phone when they hold it near the lost AirTag – like contact details, for example.

It all sounds pretty convenient, and when used as intended as in the case of missing luggage, it can prove excellent value.

But some have expressed concern about the gadget’s potential to track people rather than items, with criminals or stalkers theoretically capable of slipping one into someone’s bag or even on their car.

Apple insists it has made AirTags “stalkerproof”, because the Find My app will alert people if one of the gadgets that does not belong to them, and is assigned to someone else, is detected for an extended period of time.

But the company is the focus of a class-action lawsuit in San Francisco, brought by two women alleging the devices made it easier for ex-partners to track them down.

Sharing a picture of her bag’s position on a map, she said: “For the first time since Friday my AirTag (and hopefully luggage) appears to be on the move… it’s at a McDonalds?

The McDonald’s in question appeared to be on Rhode Island Avenue, near a shopping centre bearing its name.

It eventually left the fast food restaurant, returning to the apartment complex.

The second day of the new year brought hope that the luggage would find its way to Ms Szybala’s home.

“My AirTag is on the move! It’s about 16 miles outside of the city in the suburbs,” she tweeted.

Unfortunately, her hopeful fingers crossed emoji was misplaced, as the bag ended up going back to the flats.

Following the bag’s latest return to the flats, Ms Szybala enlisted a “little posse” – including local news crews – to go with her to the building.

A text message purporting to be the courier followed, telling her that the bag would be delivered on the day and encouraging her to “call me or text me if any questions”.

“It’s sketchy, and it doesn’t really match with what my AirTag tracking said, but I immediately called the number,” revealed Ms Szybala.

“The dude who picked up was around the corner, so he drove back to meet me near the building.

“He looked a little surprised to have two news crews filming. He asked if he was in trouble or something, but at that moment I was too happy to have my bag back to ask more questions.”

Ms Szybala encouraged her followers, who were left on tenterhooks by her day-to-day sleuthing, to use tracking devices on their luggage in case a similar situation befalls them.

A United spokesperson told Sky News: “We’ve been in touch with this customer to discuss this situation and confirm she has received her luggage.

“The service our baggage delivery vendor provided does not meet our standards, and we are investigating what happened to lead to this service failure.”