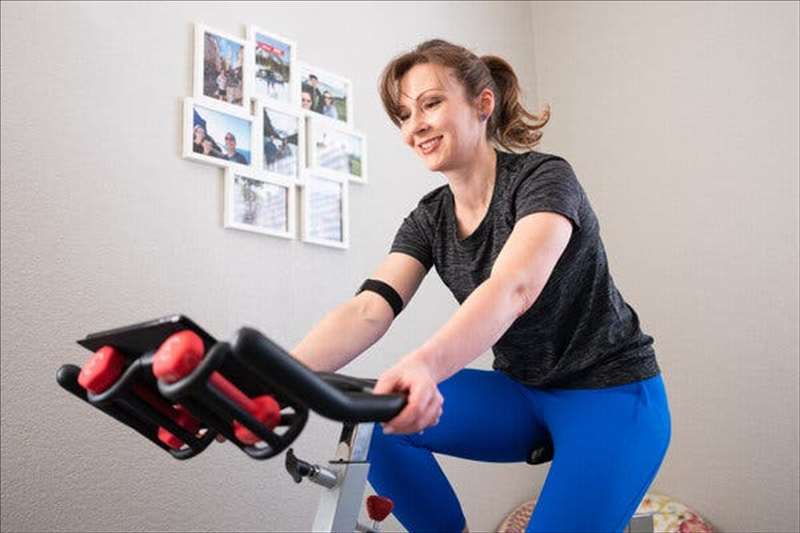 Don’t want to pay $1,900 for a Peloton bike, plus a subscription fee for classes? Here are ways to reduce the cost of using tech to exercise at home.

Lisa Whitney, a dietitian in Reno, Nev., came across the deal of a lifetime about two years ago. A fitness studio was going out of business and selling its equipment. She scored an indoor exercise bike for $100.

Ms. Whitney had no desire to upgrade to one of Peloton’s $1,900-plus luxury exercise bikes, which include a tablet to stream classes and sensors that track your speed and heart rate. So she further modified her bike to become a do-it-yourself Peloton, buying sensors and indoor cycling shoes.

The grand total: about $300, plus a $13 monthly subscription to Peloton’s app. Not cheap, but a significant discount to what she might have paid.

But all of that can be expensive. The minimum prices of an Apple Watch and iPhone add up to $600, and Apple Fitness Plus costs $10 a month. Then to stream classes on a big-screen TV instead of a phone while you exercise, you need a streaming device such as an Apple TV, which costs about $150. The full Peloton experience is even pricier.

With the economy in a funk, many of us are trying to tighten our spending while maintaining good health. So I experimented with how to minimize the costs of doing video-instructed workouts at home, talked to tinkerers and assessed the pros and cons.

To start my experiment for working out at home on the cheap, the first question I tackled was whether to subscribe to a fitness app or stream classes from YouTube for free. Both largely provide videos of instructors guiding you through workouts.

One immediate downside was almost too much content — often hundreds of videos per YouTuber — making it difficult to pick a workout. Even when I finally chose a video, I learned I had to brace myself for some quality issues.

Those issues aside, I was able to do all of the exercises demonstrated by these YouTubers, and they left me winded and sweaty. For the cost of free, I can’t complain much. Most important, Yoga With Adriene succeeded in making me feel less dead inside.

To compare the free YouTube exercise videos with the paid experience, I subscribed to Peloton and Apple Fitness Plus on my Apple TV set-top box. I did workouts using both products for the last two months.

Peloton and Apple Fitness Plus addressed many of the problems plaguing the free exercise content.

For one, workouts were organized into categories by the type of workout, including yoga, strength training and core, and then by the difficulty or duration of the workout. It took little time to choose a workout.

In both Peloton and Apple Fitness Plus, video and audio quality were very clear, and the workouts were shot at various angles to get a good look at what the instructors were doing. The bonus of Fitness Plus was that my heart rate and calories burned were displayed on both my Apple Watch and the TV screen.

In short, paying those subscriptions provided convenience and polish, which led to a more pleasant workout. I concluded that Peloton’s videos were worth paying $13 a month. And $10 a month is reasonable for Apple Fitness Plus, but only if you already have an Apple Watch and iPhone.

So what about exercise equipment like spin bikes? If you want the tech frills of a Peloton but don’t want to spend on the equipment, there were two main approaches.

To go the cheapest route, you can make use of a bicycle you already have. Here’s where home tinkerers can be especially crafty and resourceful.

But if you use your own bicycle or a modified spin bike and try Peloton’s app, you won’t be able to participate in the app’s so-called leader board, which shows a graphic of your progress compared with other Peloton users online.

With a D.I.Y. bike, it can also be difficult to figure out how to shift gears to simulate when the instructor is telling you to turn up the resistance — like when you are pretending to ride up a hill.

“I didn’t want to be locked into their platform,” she said of Peloton.