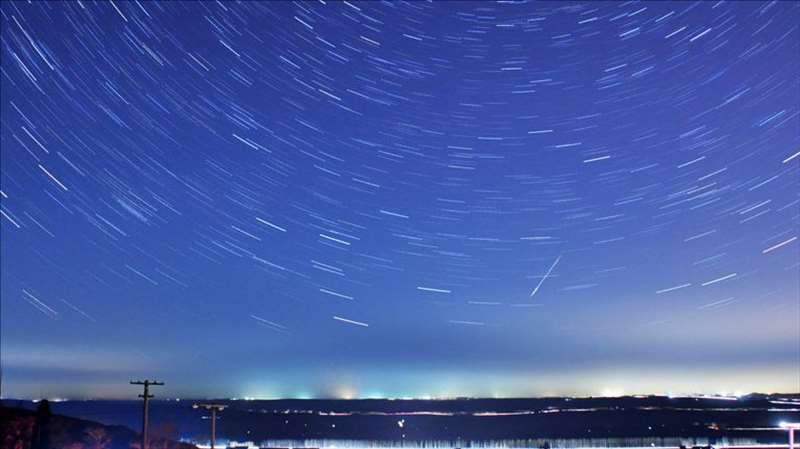 The Quadrantid meteor shower will peak on 3-4 January – here’s everything you need to know for your best chance at catching it.

Tuesday night could see up to 110 meteors an hour in the sky over the UK as the Quadrantid meteor shower makes an appearance.

Here’s all you need to know to maximise your chance of seeing it.

The most important thing is to get yourself away from street lights and other sources of light pollution.

Unfortunately the next full moon is on Friday, meaning the sky will be providing a bit of light pollution of its own.

Greenwich Royal Observatory advises people to head to a wide open space where you can scan the heavens, as meteors can be seen in all parts of the sky.

To really increase your chances, consider parking up in one of the UK’s dark sky reserves – Snowdonia, Brecon Beacons and Exmoor national parks – or in Europe’s largest Dark Sky Park – Northumberland National Park and the adjoining Kielder Water and Forest Park.

Unfortunately the weather is not at its best for observing the night sky.

If you’re lucky enough to get clear skies and not too much light from the moon, expect to see blue meteors with fine trains.

You’ll need to allow 30 minutes or so for your eyes to adjust to the dark. You should also be prepared to be outside for a while, so wrap up warm.

The Quadrantids can be seen with the naked eye so there’s no need for binoculars or a telescope.

According to NASA, a meteor is a space rock, also called a meteoroid, that enters the Earth’s atmosphere.

Meteors are created when a comet gets close to the sun and breaks apart due to the heat.

They are sometimes seen when the Earth is in its orbit around the Sun and passes through debris leftover from the disintegrated comets.

As the space rock falls towards Earth the drag of the air makes it extremely hot, which gives the appearance of a “shooting star”.

The bright streak of light is not the rock itself, but the glowing hot air.

Usually, the meteoroids are very small, sometimes no bigger than a boulder, and burn up in the atmosphere.