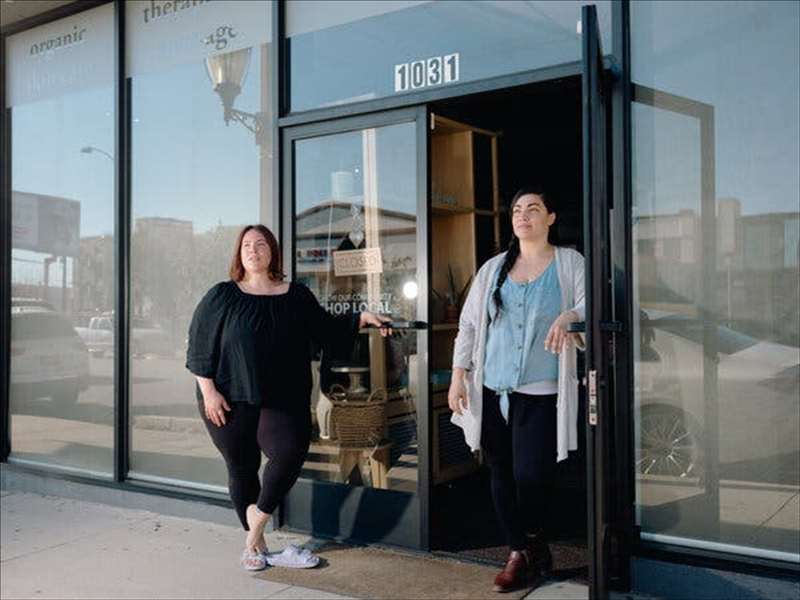 The pain for such enterprises been particularly acute in the state, leading some to back an effort to replace Gov. Gavin Newsom.

LOS ANGELES — Alexandra and Daniela Del Gaudio had never been to a political rally before, let alone one to protest a coronavirus lockdown and recall Gov. Gavin Newsom. But things had changed in the sisters’ lives since they opened the Wild Plum, a yoga and wellness space, in 2018.

“Everyone says to walk away, but we put everything we have into this,” Daniela Del Gaudio, 33, said. “We’re banging our heads trying to figure out what to do.”

After they are verified and costs are estimated, the state has 60 to 80 days to schedule an election. Voters will be asked two questions on the ballot. The first is whether Mr. Newsom should be recalled. The second: Who should replace him? If the first question on the recall comes up short, the second becomes moot.

Dan Newman, a political strategist for Mr. Newsom, said the governor was focused on coronavirus vaccinations and reopening the state. Mr. Newman blamed “state and national G.O.P. partisans” for supporting “this Republican recall scheme in hopes of creating an expensive, distracting and destructive circus.”

Acknowledging that the pandemic has “heavily impacted our small businesses,” the director of the Governor’s Office of Business and Economic Development, Dee Dee Myers, pointed to several state programs that offer them help. They include the California Small Business Covid-19 Relief Grant Program, the California Rebuilding Fund and the Main Street Hiring Tax Credit.

Ronna McDaniel, chairwoman of the Republican National Committee, said in a statement that Mr. Newsom had “proven that he is woefully unqualified to lead the state of California.”

Mr. Gruel argued in an interview last month that California’s lockdown rules were confusing and hurt small businesses disproportionately. “None of the rules make sense,” he said one afternoon from the Slapfish in Huntington Beach.

As evidence, Mr. Gruel pointed to the Walmart just up the road. While local restaurants could not have diners sit outside in the first lockdown, even six feet apart and with plexiglass between them, a Burger King inside the Walmart remained open, he said.

“And that was legal,” he said. “It’s like W.W.E. in there, people cross-body blocking each other for B.K. delight.”

Mr. Gruel said he had laid off 100 people, had closed one of his restaurants permanently and was worried about the rest of Slapfish’s two dozen locations. The company has lost around $100,000 and taken on a lot of debt, he added.

That afternoon, he let people sit outside anyway, even though it was against the lockdown restrictions at the time. “You could do a citizen’s arrest,” he suggested.

Local business associations said they were also furious. Nick Rimedio, who serves on the West Hollywood Chamber of Commerce, said the lockdowns had widened a class divide. While quarantine has been almost relaxing for what he called the wealthy “Zoom class,” it has been a nightmare for the poor and middle class who have storefronts or work service jobs in businesses in the area, he said.

“If you’re well-to-do, if you have a healthy stock portfolio, if you can work from home, you’ve saved on your commute. You’re doing great,” Mr. Rimedio said.

Last month, Ms. Marsden, 48, gathered dozens of local business owners, including the Del Gaudio sisters, to discuss how to survive and what to do to push for reopening. Many owned bars and restaurants; others owned gyms or spas. Almost all of their locations had been closed since March.

They sat at different tables, spaced a few feet apart. Most wore masks most of the time.

Belinda and Joe Lyons, who own the Celtic Raven Pub and co-own JJ Sullivan’s Irish Pub in the San Fernando Valley, said they had furloughed 12 people. One of their suppliers was demanding payments they could not make, they said. The Celtic Raven landlord has been pressuring them for 10 months of unpaid rent. By March 1, they will be personally liable for $49,000 in back rent.

“It’s going to kill us,” Mr. Lyons said. “Our retirement savings are gone.”

“When we were told we could open last June by Gavin Newson, I put full insurance back with the intention of reopening, only to be told that we could not,” she said. “That cost me over $8,000 that I’m still paying, as the insurance company would not cancel.”

Another attendee was Guido Murga, the owner of One Headlight, a hospitality supplies distributor. He said his business was down because restaurants, his main customers, were hurting.

“I sell napkins, straws, cherries, olives, to-go cups. When they close, I close,” he said. “I’m drowning week to week.”

Ms. Marsden had never led a rally before, but she got into the energy of it.

“Come April or May, how many of us will be here?” she asked, her voice rising.

The event was disrupted midway through when a small group of virus skeptics who had joined the crowd grew boisterous and demanded that people stop wearing masks. The moment reflected the complexity at play. Those fighting to open businesses in a responsible way were tangling with more Trumpist factions, who saw new allies in some of the apolitical business owners.

Carey Ysais, owner of the bar Kahuna Tiki, stood up to call everyone back to order.

“We were raised to work hard. We’re not even given that opportunity,” Alexandra Del Gaudio, 36, said. “We’re trying to pull our families out of poverty.”