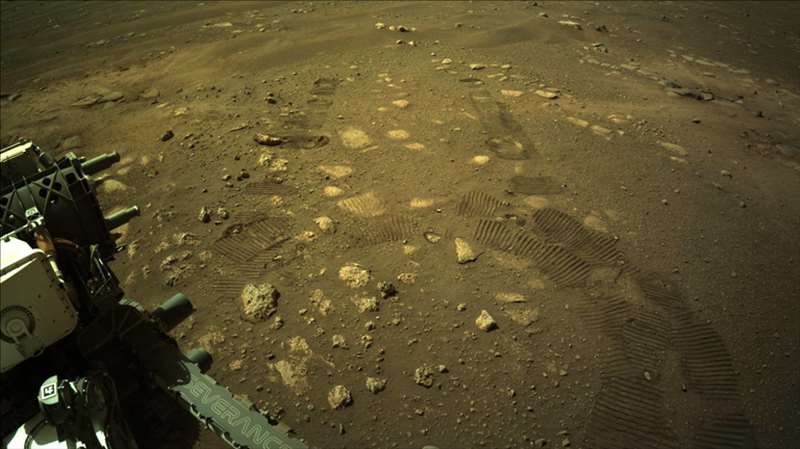 The agency’s largest and most advanced rover prepares for science operations that could prove whether Mars supported life.

NASA’s Perseverance rover has taken its first drive on Mars, just weeks after landing on the Red Planet.

The one-tonne robot travelled 21.3ft (6.5m) in a mobility test that the space agency said will allow the checking and calibrating of the rover’s systems and instruments.

Once Perseverance really gets going, it is expected to undertake regular commutes of 656ft (200m) or more.

Anais Zarifian, Mars 2020 Perseverance rover mobility test bed engineer at NASA’s Jet Propulsion Laboratory in Southern California, said: “When it comes to wheeled vehicles on other planets, there are few first-time events that measure up in significance to that of the first drive.

“This was our first chance to ‘kick the tyres’ and take Perseverance out for a spin.”

And the news was good: Ms Zarifian said the rover’s six-wheel drive “responded superbly”, adding: “We are now confident our drive system is good to go, capable of taking us wherever the science leads us over the next two years.”

Perseverance was moving for about 33 minutes, first driving 13ft before turning in place 150 degrees and reversing 8ft to find its new parking space.

The landing came after a 300 million-mile journey over nearly seven months, as part of a mission to find out whether there was once life on the mysterious planet.

Scientists believe that if there ever was life on Mars, it would have been 3 billion to 4 billion years ago, when water still flowed there.

Two spacecraft from the UAE and China have also swung into orbit around Mars in recent weeks, a sign of the growing global interest.

Perseverance carries 19 cameras – more than any other interplanetary mission – and has sent 7,000 photos back to earth already.

The samples of rock and soil it collects will be sealed in tubes and left in a well-identified place on the surface for a future mission to collect.