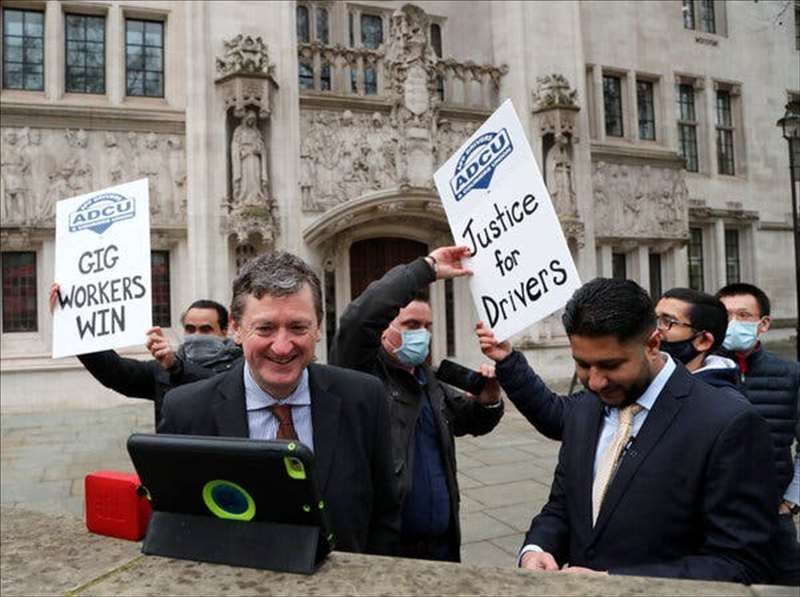 The new legal classification, which follows a U.K. court ruling last month, will entitle the workers to more pay and benefits, but stops short of making them employees.

LONDON — For years, Uber has successfully deployed armies of lawyers and lobbyists around the world to fight attempts to reclassify drivers as company workers entitled to higher wages and benefits rather than lower-cost, self-employed freelancers.

Now the ride-hailing giant is retreating from that hard-line stance in Britain, one of its most important markets, after a major legal defeat.

The fragile business model of Uber and other so-called gig economy companies depend on keeping labor costs down by using a sprawling network of workers defined as independent contractors. Although the services have altered how people commute and order takeout, and have been valued in the billions of dollars by investors, they have struggled to turn a profit. In 2020, Uber reported a net loss of $6.8 billion.

Uber had fought off past labor regulations by arguing that it acts only as a technology platform that connects drivers and passengers. But the justices for Britain’s Supreme Court ruled unanimously that Uber behaves more like an employer by setting rates, assigning rides and requiring drivers to follow certain traffic routes.

The court decision was cheered by labor activists who have spent years criticizing how companies such as Uber, Lyft, DoorDash and Grubhub treat drivers and delivery people.

In Britain, Uber originally sought to downplay the Supreme Court ruling. The company said the decision would apply to only a very small number of drivers in Britain. But the company risked becoming bogged down in legal proceedings with individual drivers across Britain about the application of the judgment.

In a statement, Uber said last month’s court decision “provides a clearer path forward as to a model that gives drivers the rights of worker status — while continuing to let them work flexibly, in the same way they have been since Uber’s launch in the U.K. in 2012.”

Further legal disputes are still likely in Britain. An influential group of drivers criticized Uber’s decision because it does not guarantee a base wage while drivers are waiting to be assigned a ride. A common complaint among Uber drivers is that the supply of drivers often exceeds demand from passengers, driving down wages because there are fewer fares to go around, a dynamic made worse during the pandemic as ridership has collapsed.

The debate over whether drivers should be paid while they wait for fares has been contentious in Britain and abroad. Uber has argued that drivers would log on to the app to collect pay without giving any rides, forcing the company to assign shifts or limit when drivers work. But labor advocates said pay during wait time was essential for drivers to earn a wage comparable to workers in other sectors.

“What Uber is being forced to give workers in the U.K. is quite significant,” said Veena Dubal, a law professor at the University of California, Hastings, who studies the gig economy. “There’s a much broader opening available to the labor advocates and unions to make sure that all the laboring time is paid for, but it is certainly going to be a battle.”

Uber did not disclose how much the reclassification of British drivers would increase its costs, but it said in a regulatory filing that it did not alter the company’s financial targets for the year. London is one of Uber’s five largest markets, and Britain accounts for about 6.4 percent of the company’s total gross bookings.

“Uber is just one part of a larger private-hire industry, so we hope that all other operators will join us in improving the quality of work for these important workers who are an essential part of our everyday lives,” he said in a statement.