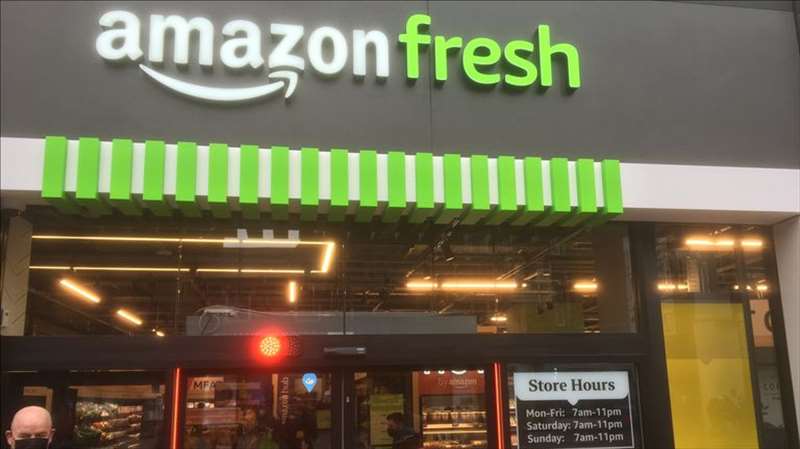 Amazon has opened its first till-less store in the UK, and Sky’s Andy Hayes went to sample what could be the future of shopping.

This must be what it feels like to go shoplifting, I thought, as I walked out of Amazon’s new till-less shop in London.

You go in, take items off the shelves, put them in a bag, and wander back through the doors and on to the pavement.

What’s not to like? Well, you do still get charged, of course.

Next, you click on “Fresh Code” at the top of the screen, which gives you a QR code to scan as you enter the store.

After that, you simply take items from the shelves and the chiller cabinets, the software somehow tracking exactly where you are and what you’ve selected.

“It’s absolutely nuts,” one customer said to a friend as they walked past the herbs and spices.

“You feel like a thief,” said a man holding one of the store’s lime green bags outside, “Just Walk Out Shopping” emblazoned on its side.

It was one of those bags that confused me. They weigh next to nothing, but the clearly super-sensitive software somehow knows you’ve taken one.

There are also greetings cards, napkins and bunches of flowers, which, again, are not exactly heavy. But the tech picks them up at the same time you do.

In addition to soup, fruit and a curry, I also bought a can of beer – for purely professional purposes, of course.

I wanted to see if adding alcohol to your bag made any difference. It didn’t, but a member of staff is stationed at the entrance to that section.

The tech is not exactly hidden. Look up, and you see lots of sensors on long stalks reaching down from the ceiling.

Some shoppers will undoubtedly feel it takes the surveillance society even further.

It’s a bit like being in an episode of Doctor Who – but without the daleks, thankfully.

What’s the quality like? The pea and ham soup I had for lunch was a little thin, perhaps, but tasted perfectly pleasant.

This new till-less store – Amazon’s first outside the US – feels like a big change.

It appears certain there will be much less queuing in future, partly because the company is apparently considering selling its tech to other supermarkets.

Long lines of people with bulging baskets may soon be a thing of the past, and the UK a less impatient nation.