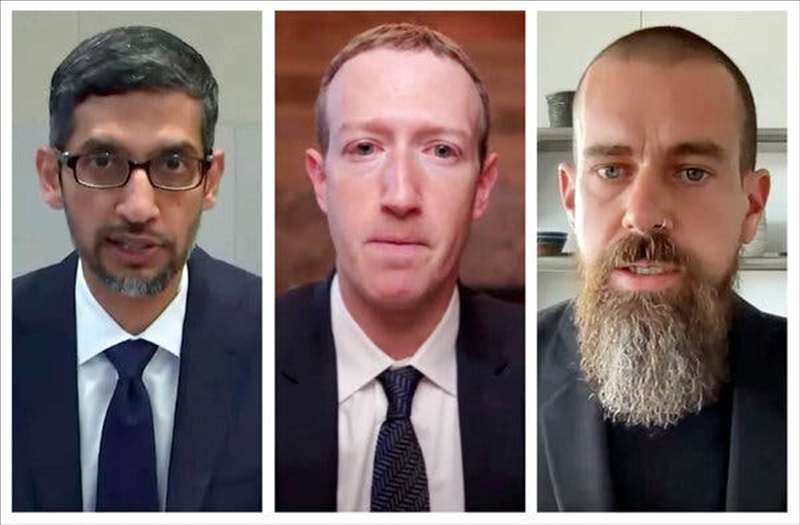 The leaders of Google, Facebook and Twitter faced sharp questions about misinformation’s role in the attack and the mental health of children who use their products.

When a Democratic lawmaker asked the executives to answer with a “yes” or a “no” whether the platforms bore some responsibility for the misinformation that had contributed to the riot, Jack Dorsey of Twitter said “yes.” Neither Mark Zuckerberg of Facebook nor Sundar Pichai of Google would answer the question directly.

It was also the first time the executives had testified since President Biden’s inauguration. Tough questioning from lawmakers signaled that scrutiny of Silicon Valley’s business practices would not let up, and could even intensify, with Democrats in the White House and leading both chambers of Congress.

The chief executives have become Capitol Hill regulars in recent years. Mr. Zuckerberg has testified seven times since 2018. Mr. Dorsey has appeared five times and Mr. Pichai has testified four times since then. But these hearings, regarding disinformation, antitrust and data privacy, have not led to regulations. Though there is bipartisan animus toward the companies, there is still little agreement on how specifically to hold the internet giants to account. Dozens of privacy, speech and antitrust bills have gone nowhere in the past few years.

“It will be very challenging to translate these concerns into legislation,” said Alexandra Givens, the chief executive of the Center for Democracy and Technology, a tech think tank.

At the heart of the hearing were questions about whether the companies had a financial incentive to keep users engaged — and clicking on ads — by feeding them divisive, extreme and hateful content. Lawmakers from both parties said Congress should reconsider a law that shields the platforms from lawsuits over content posted by their users.

Lawmakers, who compared the business practices of social media companies to tobacco and alcohol companies, grew frustrated at times with what they said was the executives’ evasiveness.

Representative Mike Doyle, Democrat of Pennsylvania, asked the tech chief executives to answer yes or no: Did their platforms contribute to the spread of misinformation before the riot?

“Yes,” he said. “But you also have to take into consideration the broader ecosystem. It’s not just about the technology platforms we use.”

“How is it possible for you not to at least admit that Facebook played a leading role in facilitating the recruitment, planning and execution of the attack on the Capitol?” he asked Mr. Zuckerberg.

“But your platforms supercharged that,” Mr. Doyle said.

The January riot at the Capitol has made the issue of disinformation deeply personal for lawmakers. The riot was fueled by false claims from President Donald J. Trump and others that the election had been stolen, which were rampant on social media.

Some of the participants had connections to QAnon and other online conspiracy theories. And prosecutors have said that groups involved in the riot, including the Oath Keepers and the Proud Boys, coordinated some of their actions on social media.

Lawmakers also criticized the platforms for the way they have enabled the spread of misinformation about the coronavirus pandemic and the vaccines for Covid-19. Representative Anna Eshoo, a California Democrat who represents part of Silicon Valley, told Mr. Dorsey that Twitter should “eliminate all Covid misinformation — and not label or reduce its spread, but remove it.”

Republicans criticized the companies for the amplification of toxic content that particularly harmed children. Representative Cathy McMorris Rodgers, Republican of Washington, said social media was her “greatest fear” as a parent. “I’ve monitored where your algorithms lead them. It’s frightening. I know I’m not alone,” Ms. Rodgers said.

“We’re all aware of Big Tech’s ever-increasing censorship of conservative voices and their commitment to serve the radical progressive agenda,” said Representative Bob Latta of Ohio, the ranking Republican on the panel’s technology subcommittee.

The company leaders defended their businesses, saying they had invested heavily in hiring content moderators and in technology like artificial intelligence, used to identify and fight disinformation.

Mr. Zuckerberg argued against the notion that his company had a financial incentive to juice its users’ attention by driving them toward more extreme content. He said Facebook didn’t design “algorithms in order to just kind of try to tweak and optimize and get people to spend every last minute on our service.”

He added later in the hearing that elections disinformation was spread in messaging apps, where amplification and algorithms don’t aid in spread of false content. He also blamed television and other traditional media for spreading election lies.

The companies showed fissures in their view on regulations. Facebook has vocally supported internet regulations in a major advertising blitz on television and in newspapers. In the hearing, Mr. Zuckerberg suggested specific regulatory reforms to a key legal shield, known as Section 230 of the Communications Decency Act, that has helped Facebook and other Silicon Valley internet giants thrive.

The legal shield protects companies that host and moderate third-party content, and says companies like Google and Twitter are simply intermediaries of their user-generated content. Democrats have argued that with that protection, companies aren’t motivated to remove disinformation. Republicans accuse the companies of using the shield to moderate too much and to take down content that doesn’t represent their political viewpoints.

Mr. Pichai and Mr. Dorsey said they supported requirements of transparency in content moderation but fell short of agreeing with Mr. Zuckerberg’s other ideas. Mr. Dorsey said that it would be very difficult to distinguish a large platform from a smaller one.

“There’s a lot of smugness among you,” said Representative Bill Johnson, a Republican of Ohio. “There’s this air of untouchable-ness in your responses to many of the tough questions that you’re being asked.”